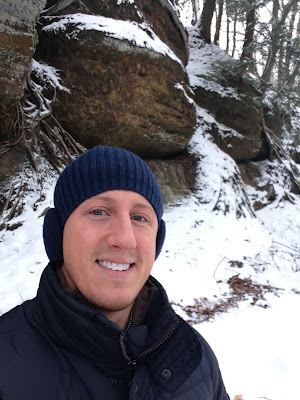 All throughout the year, and even on the coldest and most wintry of days, The Blackhand Gorge State Nature Preserve is buzzing with visitors. Perhaps it is the geographical wonders that draws them in, or maybe it's the historical aspects of the park that brings them by. Whichever it is, the 956-acre area is sure to satisfy.

Located in Licking County, just east of the City of Newark and in the small town of Toboso, the Blackhand Gorge State Nature Preserve was established in 1976 in order to protect the area for generations to come. Ten miles of hiking paths run alongside the magnificent sandstone formations, which are a tremendous sight to see. On the other side of the path is the Licking River, which runs east to west and is responsible for forming the gorge many years ago.

According to the Ohio Department of Natural Resources, the preserve got its moniker from a dark, hand-shaped Indian petroglyph which was engraved on the face of a massive sandstone cliff along the north side of the river. However, the petroglyph was destroyed during the construction of the Ohio-Erie Canal, which runs through the gorge. Sections of the canal towpaths and canal locks may be seen from the trails along the river.