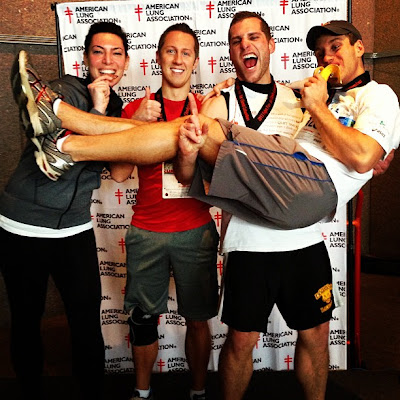 Along with 200 other brave souls, I challenged myself with what turned out to be one of the most intense physical feats I have ever encountered. I signed up to participate in the 2013 American Lung Association Fight For Air Stair Climb that took place at the Rhodes Tower in downtown Columbus.

The Rhodes Tower is a government office building located across from the Statehouse on what is known as Capital Square. Souring far into the sky, it stands at 40 stories high, making it the largest building in Columbus, and thus, the perfect setting for the 3rd Annual Fight For Air Stair Climb. The American Lung Association holds events such as this all across the country. Two others are scheduled in Ohio: March 2 at Cleveland’s Terminal Tower, and February 17 at Cincinnati’s Carew Tower. 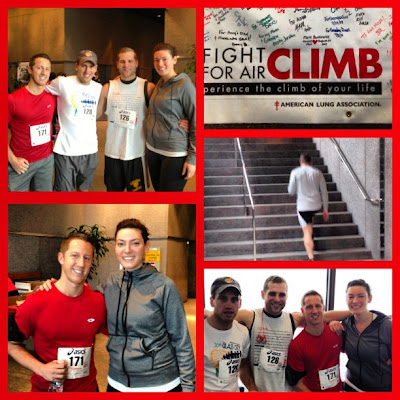 For the Columbus event that took place this past weekend, I was a member of the 4-person team representing (fittingly) Oxygen Health & Fitness – a gym located in the Short North. My teammates were friends Kristen, Chris, and Stephen. None of us – except for Chris – had ever done such a thing before, and we did our best to train in the weeks leading up to the event (stairclimbers, ellipticals, the stairwell of the office building I work at).

Chris, however, was a seasoned pro, having tackled the same event at Rhodes Tower in 2012, and finished with an incredible time of approximately 5 minutes 50 seconds! Needless to say, this was rather intimidating to the rest of us! But Chris assured us that the adrenaline would keep us going, and gave us tips as to how we could do our best as well. For instance, he advised that we not only use our legs to push us up the stairs (obviously), but to also pull yourself up with the railings. And, he said to of course skip steps!

In the lobby of the Rhodes Tower before the climb, "flights" of participants gathered around, stretching and preparing for the ascent that was to come. Many signed up for the "Beat The Buckeye" Challenge in which you could wager $10 that you could beat the climb times of former Ohio State University athletes who competed in the event earlier that morning. Never one to shy away from a challenge, I of course signed up! I bet that I would beat former defensive end (1998-1999) James Cotton. Thankfully, there was a 2-minute buffer as well, so my chances seemed pretty good. 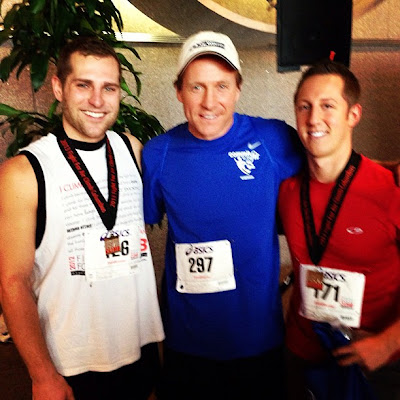 Jeff Hogan of 10TV's Commit To Be Fit program was the emcee of the event. Early in the morning my teammates and I saw him get off the elevator after completing the climb and he looked pretty tired (as it turns out, he had a time in the 6 minute range, which is amazing). After the race, Chris and I snagged a photo with him (above).

When it was time for the Oxygen Health & Fitness Team to fly up the stairwell, the adrenaline was indeed flowing! Mistakenly, I pushed myself to the max right out the gate, which caused me to lose steam after only the 6th flight! Sensing that I was running out of gas - I slowed it down a bit, but kept in mind that the best way to continue would be to never stop...just keep going!!

The stairwell was pretty dismal. Unlike when running in a 5K or marathon, there was no scenery to look at aside from the cinder blocks and the 880 stairs before you. What's more is that everyone was so staggered that you really didn't encounter many people along the way to keep pace or keep sane! All you had to look at was each flight number as you crept your way to the top! It was very much a mental game!

My legs were definitely burning (especially my quads), but what hurt even more were my lungs and chest. It was more and more difficult to breathe the higher and higher you climbed! I don't know if it had to do with the altitude, the type of exercise, or the fact that I had minimal experience in such a climb. It was probably a combo of all three! Luckily there were water stations every 10 floors! 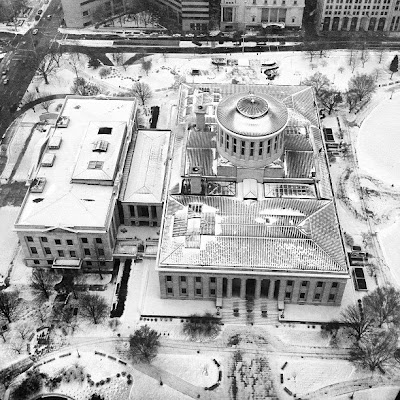 A view of the Statehouse from atop Rhodes Tower

Reaching the finishing line was a glorious feeling! At the top, everyone was FIGHTING FOR AIR, coughing, wheezing, and breathing heavily. My chest was on fire, and I was not alone. It seemed everyone was experiencing the same sensation! They were giving out peppermints, because they supposedly help in those situations. 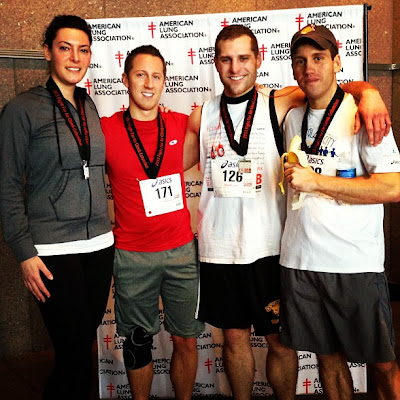 After congratulatory photos and whatnot, we collected protein bars, bananas, water bottles, and free massages by Serenity. Then, I discovered that I had won a raffle prize because I did in fact beat the Buckeye, James Cotton. My reward was a kick-ass 150-liter duffel bag from Eddie Bauer. It is enormous and awesome!

The Fight For Air Climb was one of the most unique and challenging events I have done in a long time. On top of that, it was for a fantastic cause. We all raised at least $100 for the American Lung Association to help those suffering with lung cancer, emphysema, asthma, and other lung diseases.

We climb for those who can't breathe on their own.
Posted by Mike at 11:23 PM