Cycling The Ohio To Erie Trail

The following is a post written especially for OHventures by freelance tourism writer Susie Holt!

Ohio has some great routes for cycling, but if you are a keen cyclist then you will probably already be aware that there is one route in Ohio that you really have to do, whether you live here or you are just visiting. The Ohio to Erie Trail  is the ultimate route to follow, leading as it does from the Ohio River all the way to Lake Erie. It provides some excellent, challenging riding, and takes you to some of the state's most beautiful locations. 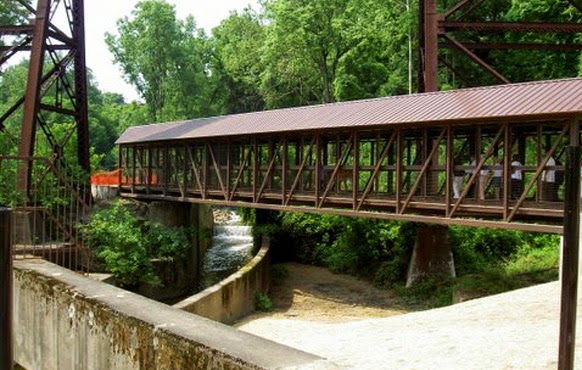 The Route
The Ohio to Erie Trail has a mix of different surfaces, ranging from paved surfaces and roads to fairly rough dirt paths, but the majority of the route is paved asphalt or limestone trail. Many parts of the route are along old railroads and canals, which means that you are often riding on the level, so this is a good route if you are new to long distance cycling or if you have not been able to train on steeper hills. You might still want to skip some of the more difficult sections, such as the hilly farmland between Brinkhaven and Dalton, but if you are heading northwards rather than starting at the Erie end, the hills will generally be in your favor.

The trail can be divided into three main sections: the Southern Leg between Cincinnati and Mount Vernon, then the Heart of Ohio Leg to Clinton, and finally the Northern Leg finishing in Cleveland. You will probably need to take more than three days to complete the entire route. (CLICK HERE FOR A FULL MAP OF THE OHIO TO ERIE TRAIL) Each of the legs is divided into different segments, so if you have less time, you might want to aim to complete a certain number of segments, or to ride one leg of the journey. The Heart of Ohio Leg has some of the most recently completed paved trail sections, but the aim is for the whole route to be completely off road, so new sections are still being added to make it possible to cross the state without encountering any cars.

Preparing for the Trip
Getting ready for a major trip like the Ohio to Erie Trail requires some careful planning. One of the most important aspects of your preparation will be making sure that you are ready to cycle this distance. Taking regular bike rides is the best way to prepare, but you can also get your muscles ready with other forms of exercise if you can't get out on the road often enough. Stationary bikes at the gym or at home can be a good alternative, but even running, weight training or swimming will help you to get fit enough for your trip.

The entire Ohio to Erie Trail is 300 miles, and it is probably best to allow yourself a week to complete the route, so you will need to ride about 43 miles a day, on average. Work up to this distance during training, if necessary, and try to get in some consecutive days of riding so that you know how your body will feel when it needs to keep going. 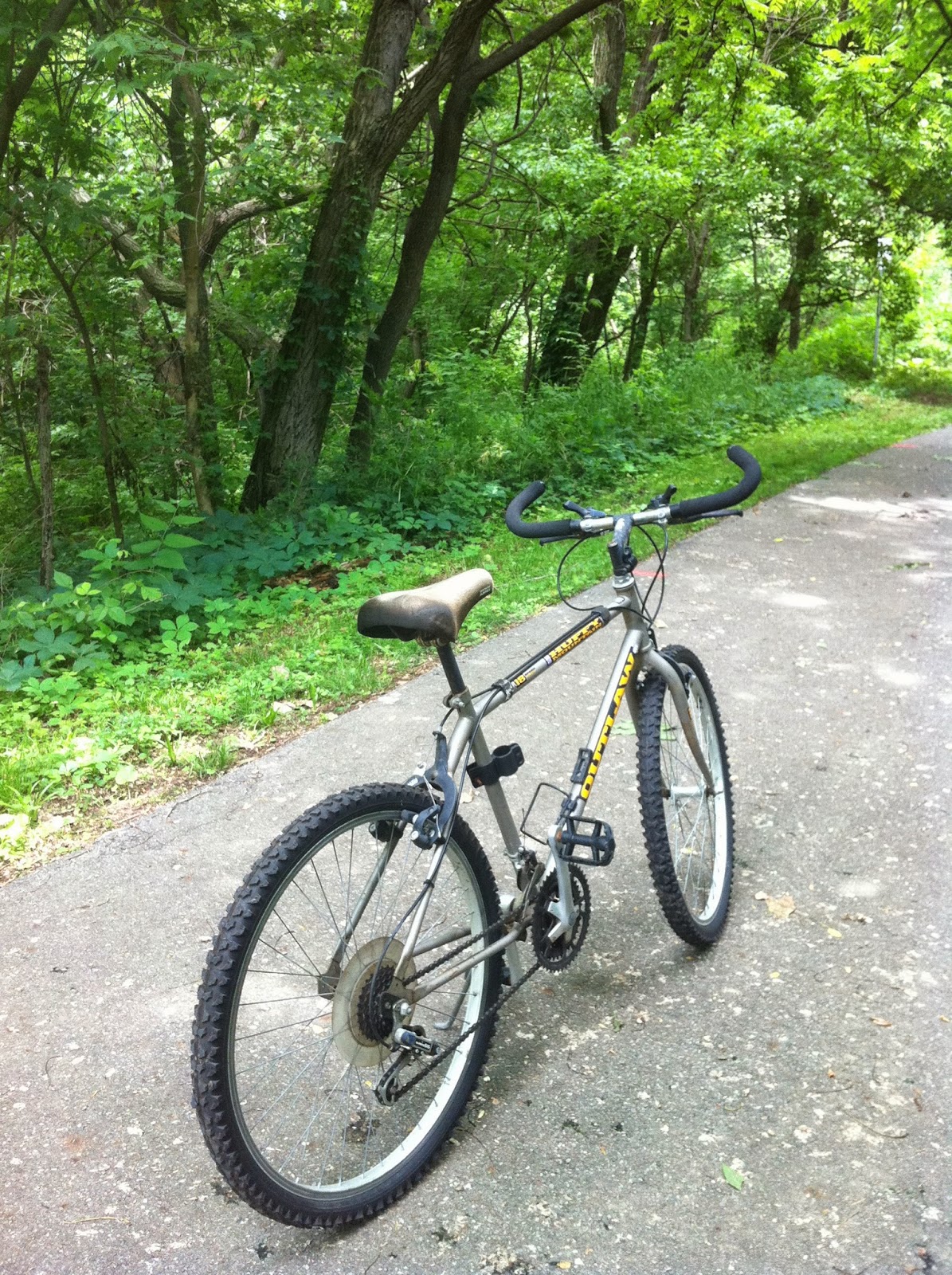 You should also make sure that your bike is in good order. A lightweight hybrid bike will be the best option for the route, but a road or mountain bike will suffice. Make sure that you check the lights, brakes and tire pressures before you live, and carry a repair kit just in case. It is also a good idea to check that your bike is covered on your home insurance or to take out additional cover for it. A first aid kit for yourself will also be useful, as will plenty of high-energy food and water.

Who: You and the thousands who are part of the mudder international craze.
What: Tough Mudder (a 10-12 mile muddy obstacle course)
When: All year 'round in different locations. In Ohio again in May 2015.
Where: All across the globe, including in Mansfield.
Why: To test your mental grit, strength, stamina, camaraderie and endurance. And, to have a fun time!
How: First, sign up, and then start training with TIPS from OHventures. 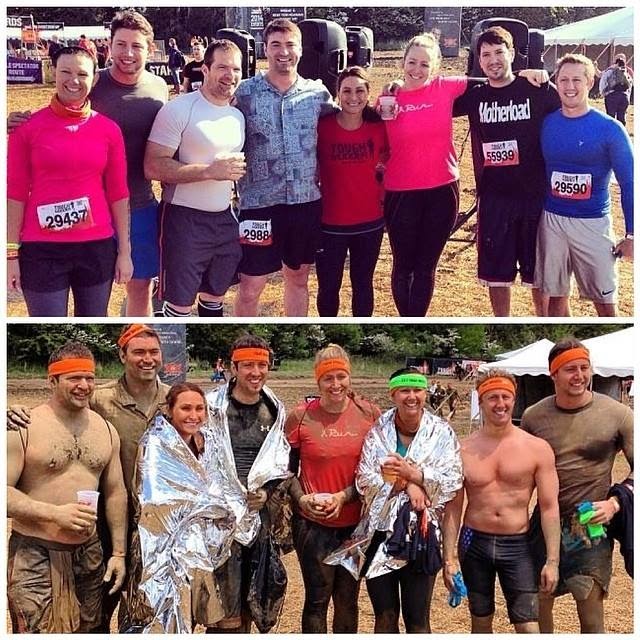 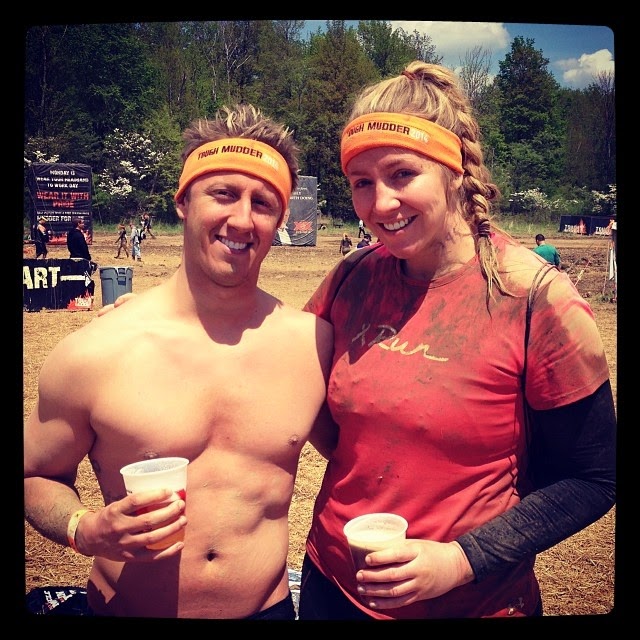 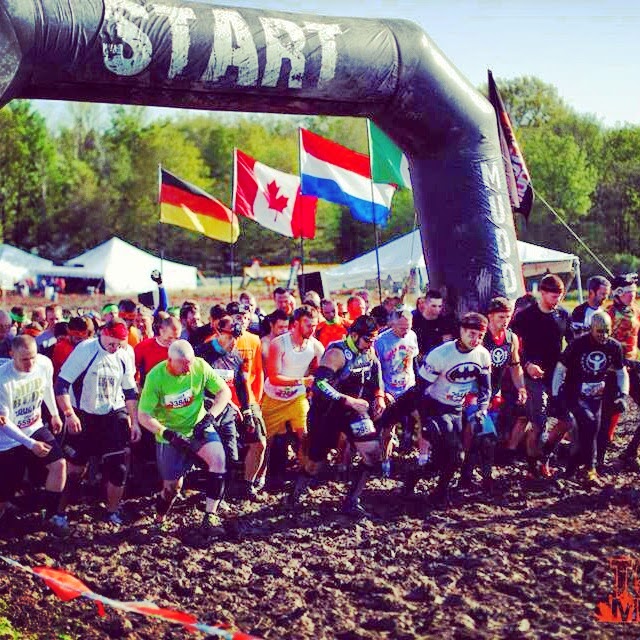 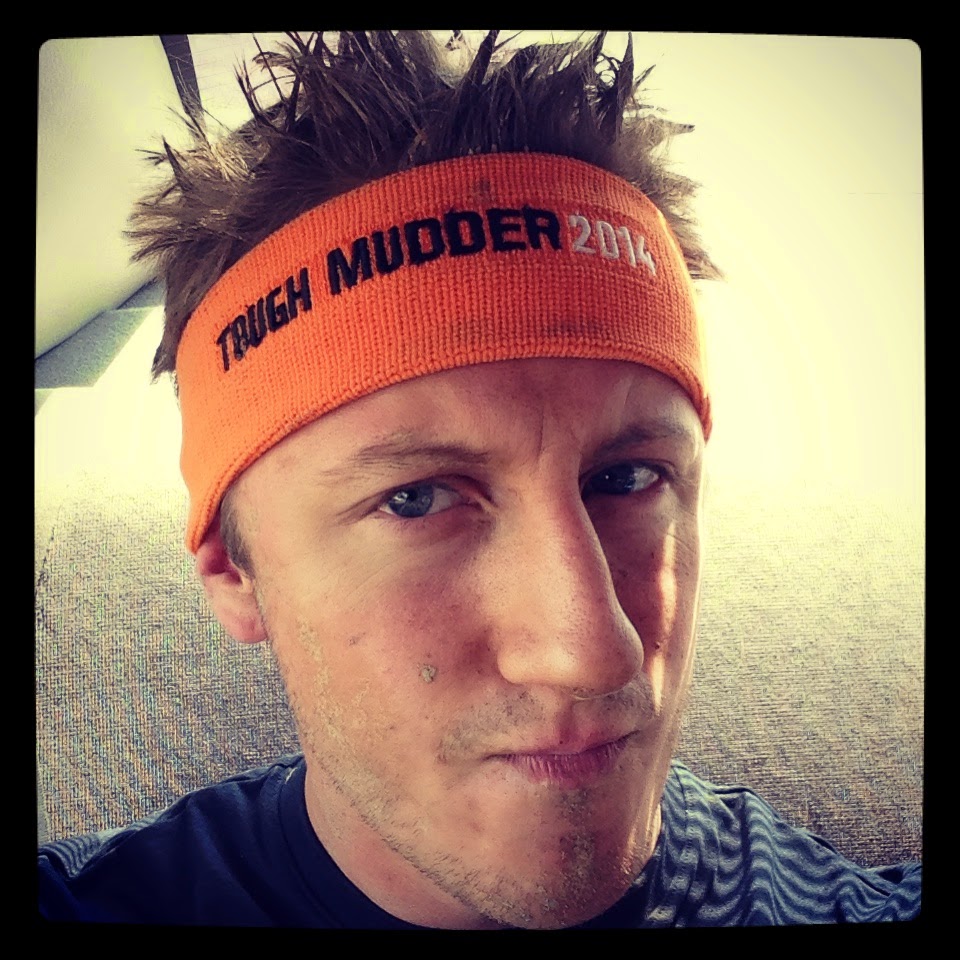 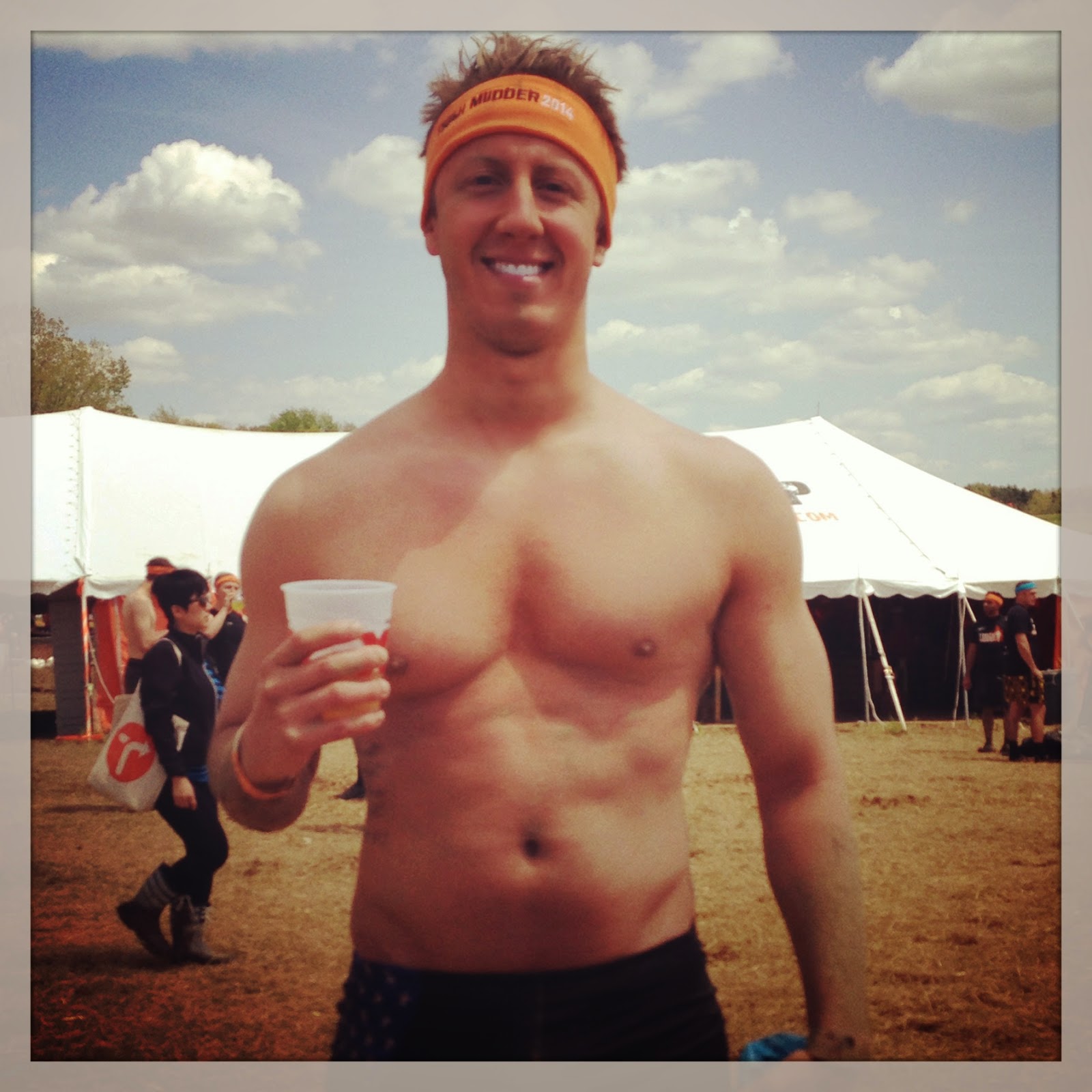 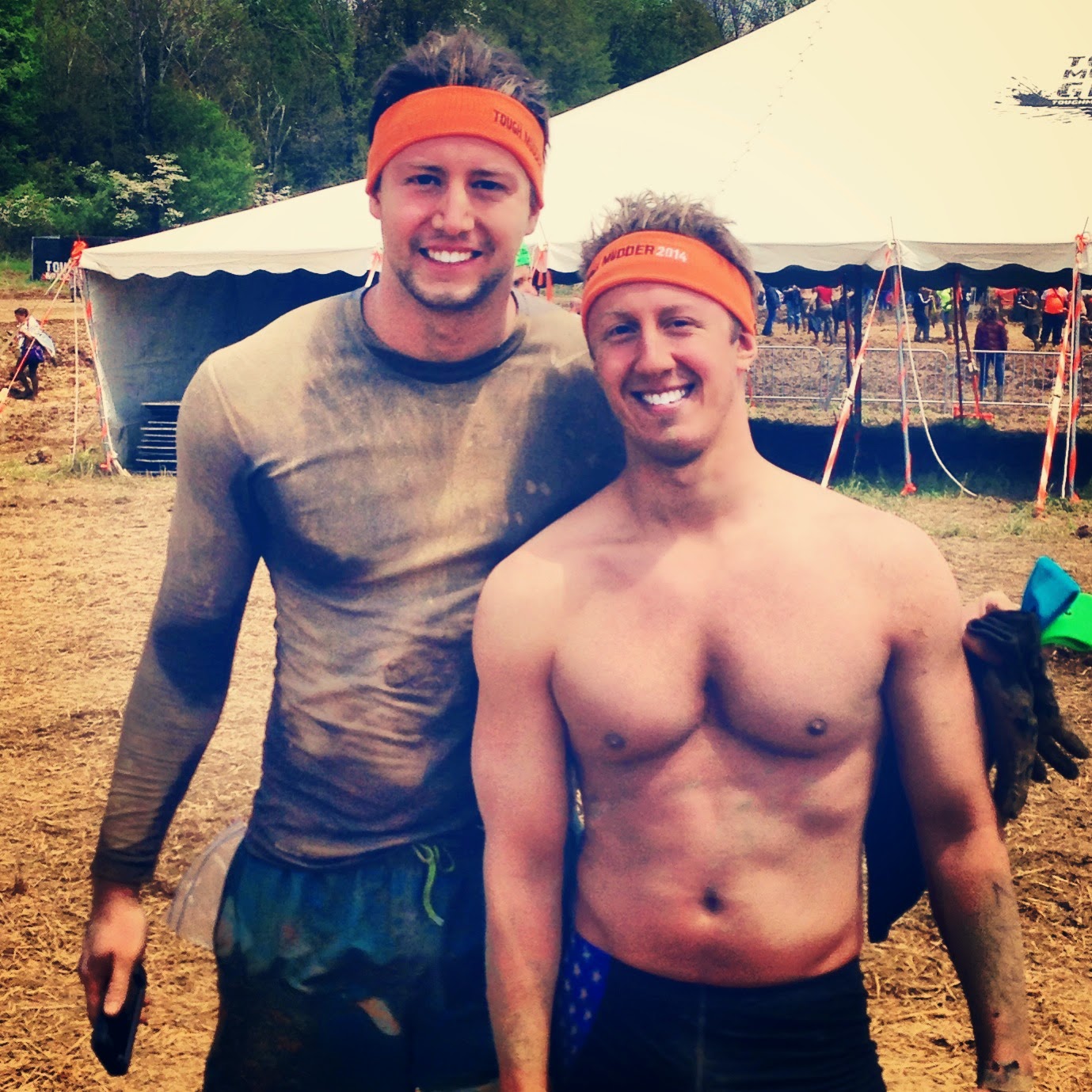 The Tough Mudder takes place all over the world, from the United States to Germany, the United Kingdom to New Zealand. On May 17 & 18, 2014, Tough Mudder came to Ohio and took over the Mansfield Airport in Richland County. Mother Nature surely delivered, with epic rainstorms threatening the entire state all week long. The rain continued through Saturday, creating an exceptionally mucky experience for the mudders on that day.

Thankfully, the rain stopped in time for the Sunday event, which is when my team, the Mudder Funners, embarked on our adventure. I actually only knew 1 of my teammates prior to the day of the Tough Mudder. My college friend Laurel compiled her team of 7 of her friends from different stages of her life. We all became quick friends, which was necessary since we would be going through such a huge milestone together. 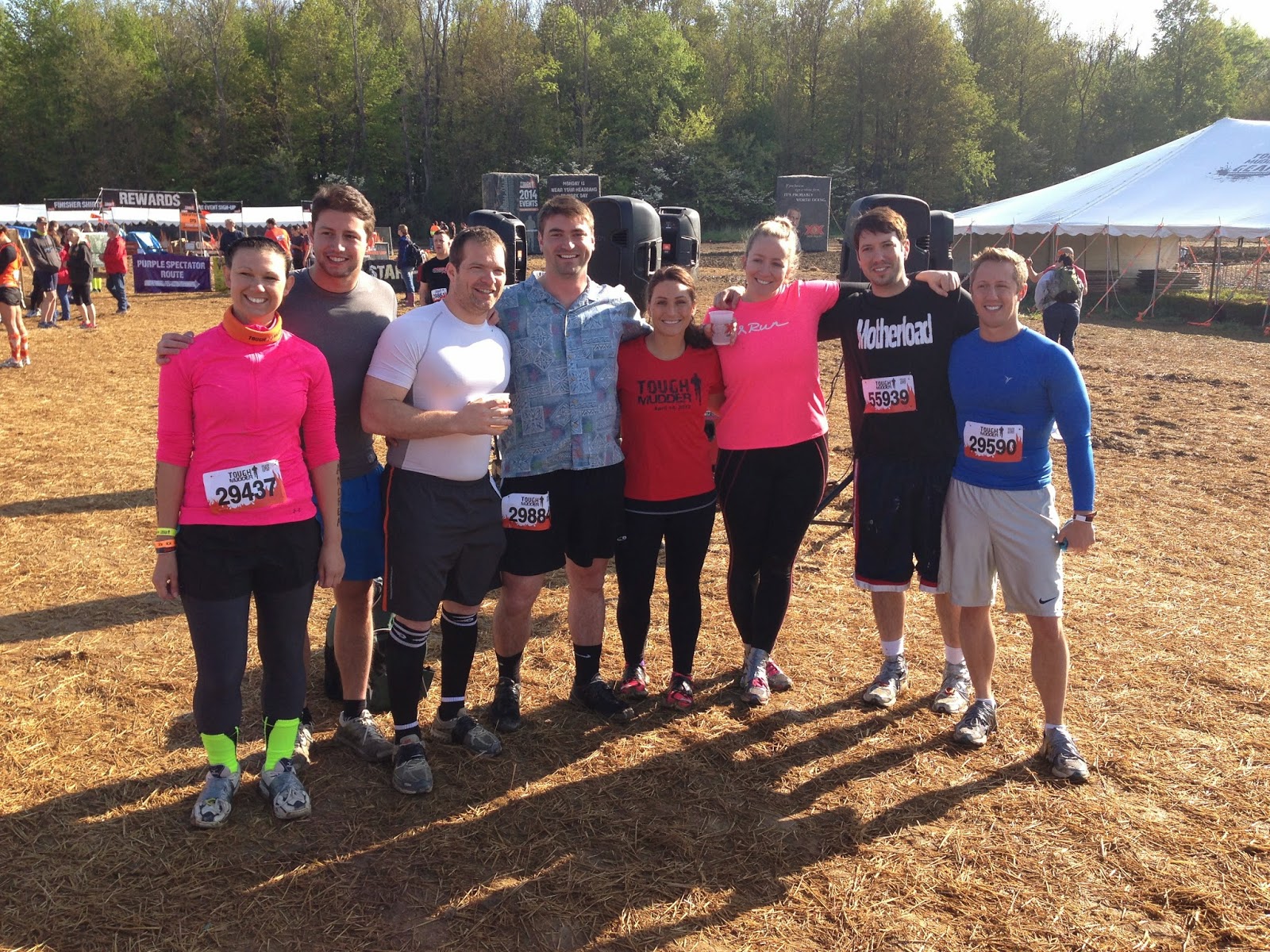 The start of our heat was at 9:20 AM, so we arrived at the parking lot at around 7:30 AM and took the shuttle to the site of the course. We got our bibs and I soon met up with my pal Johnny (pictured below), a seasoned mudder who would be completing his 15th Tough Mudder this morning! 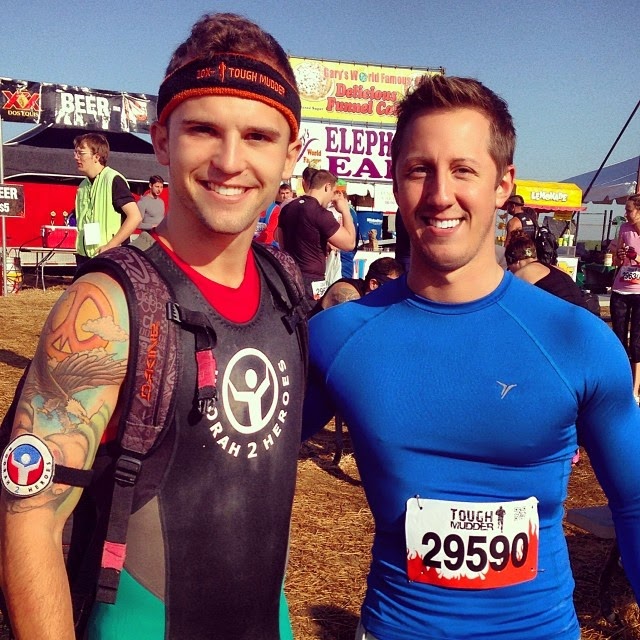 Each Tough Mudder course is different, but they always start out with a mini team-building exercise which requires all participants to hoist themselves (or be hoisted by others) over a tall wooden wall. And that's BEFORE the official start line! From there, they recognize all of the attendees who are members of the Mudder Legion, who all have done 2 or more Tough Mudders and have different color headbands to indicate how many they've done (Johnny had a black headband to show off that he had done over 10).

It was then time to kick off the wildest event I have ever done before. The course was SO muddy that we all duct-taped our shoes to our feet so that they wouldn't get sucked into the sludge. Below is a synopsis of the obstacles we encountered in Mansfield!

Q&A With A Tough Mudder Expert 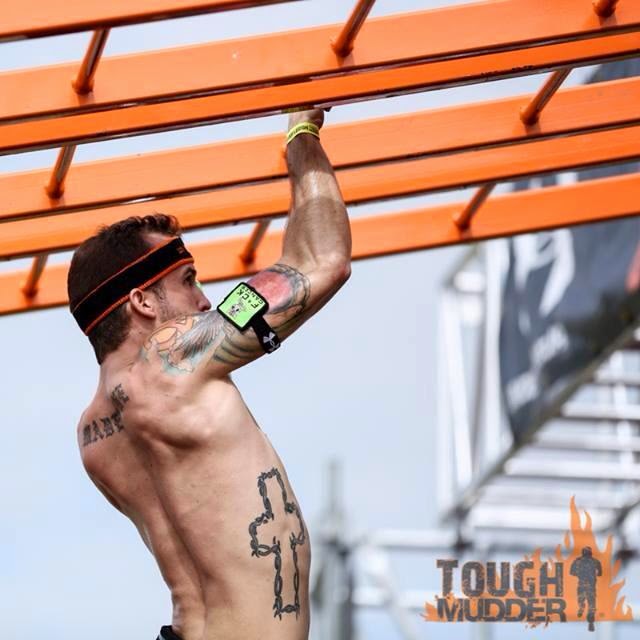 The Tough Mudder Ohio 2014 is upon us, taking place this Saturday and Sunday, May 17 & 18 in muddy Mansfield! Some people think it's crazy that I am doing this 12-mile mud run full of wild and extreme obstacles, so people must REALLY have their minds boggled when they hear about people like my friend Johnny Madeline.

In just 2 years (beginning in April 2012), Johnny has completed 14 Tough Mudder laps at 9 different venues. He has run in Ohio twice, but has also traveled to various cities to tackle the Tough Mudder, including: Florida (twice), West Virginia (twice), New York, Chicago, Poconos, and North Carolina. This weekend, Johnny plans to run the Tough Mudder Ohio course THREE times in two days! We will catch up with him on Sunday, but we also wanted to check in with an expert like him and ask a few burning questions!

OHVENTURES: Why did you start running the Tough Mudder?
JOHNNY: I did my first Tough Mudder to challenge myself. It also gives me another workout besides maintaining a healthy lifestyle. As of the beginning of 2014, I run for a different purpose: it's an organization called Hoorah 2 Heroes. Its man goal is summed up in one saying: "only a life lived for others is a life worthwhile."

OHVENTURES: What are some tips or words of advice for people who have never done the Tough Mudder?
JOHNNY: The biggest misconception is that you have to be in great shape to do one of these events and that's not true at all. You have to have the mindset and determination to complete the course, because when you cross that finish line you and get that prestigious headband. Have fun and enjoy the moment no matter what. Be sure to carb up the days before and drink plenty of water! 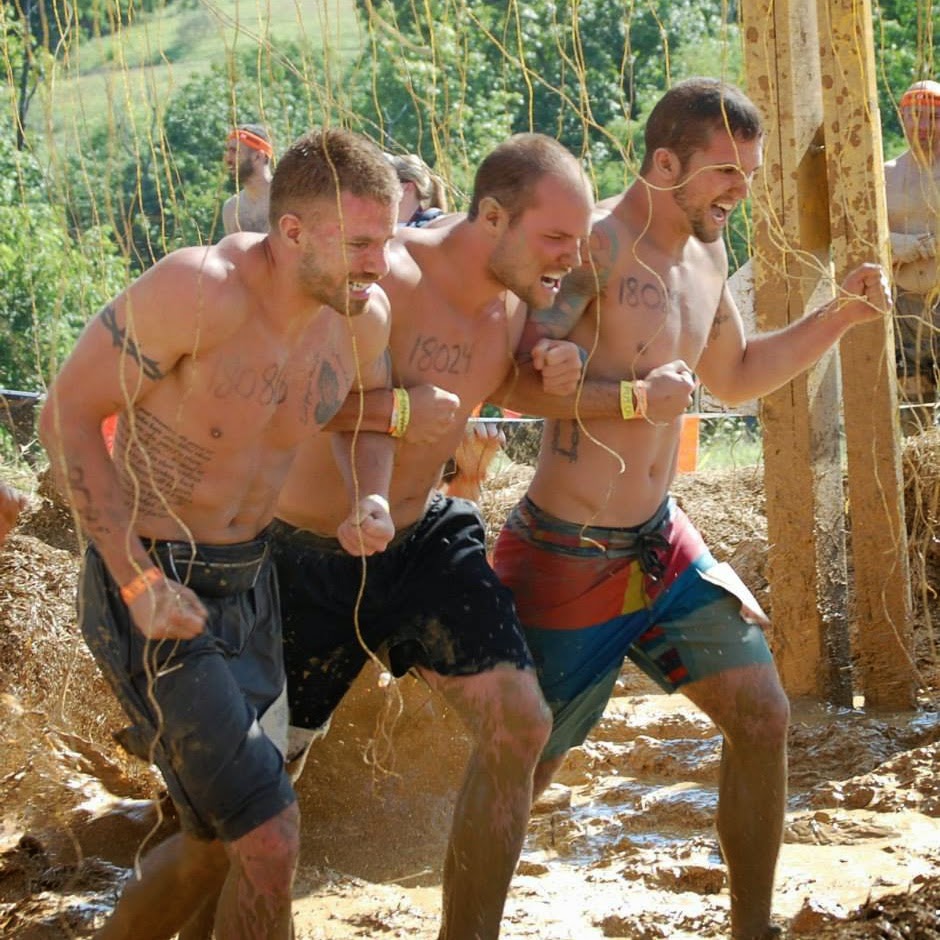 OHVENTURES: What would you say is the hardest or most difficult challenge or situation you have faced in all of your Tough Mudders?
JOHNNY: The weather can be mentally tough. Cold and rain don't mix well. The hardest obstacles for people are the monkey bars, and "Electroshock Therapy." Electroshock will give you a shock. When it hits you it's almost like your muscles seize up. The key is to cover your head, because when it knocks you in the head you blackout, and when you blackout you face plant. Don't be that person to face plant. 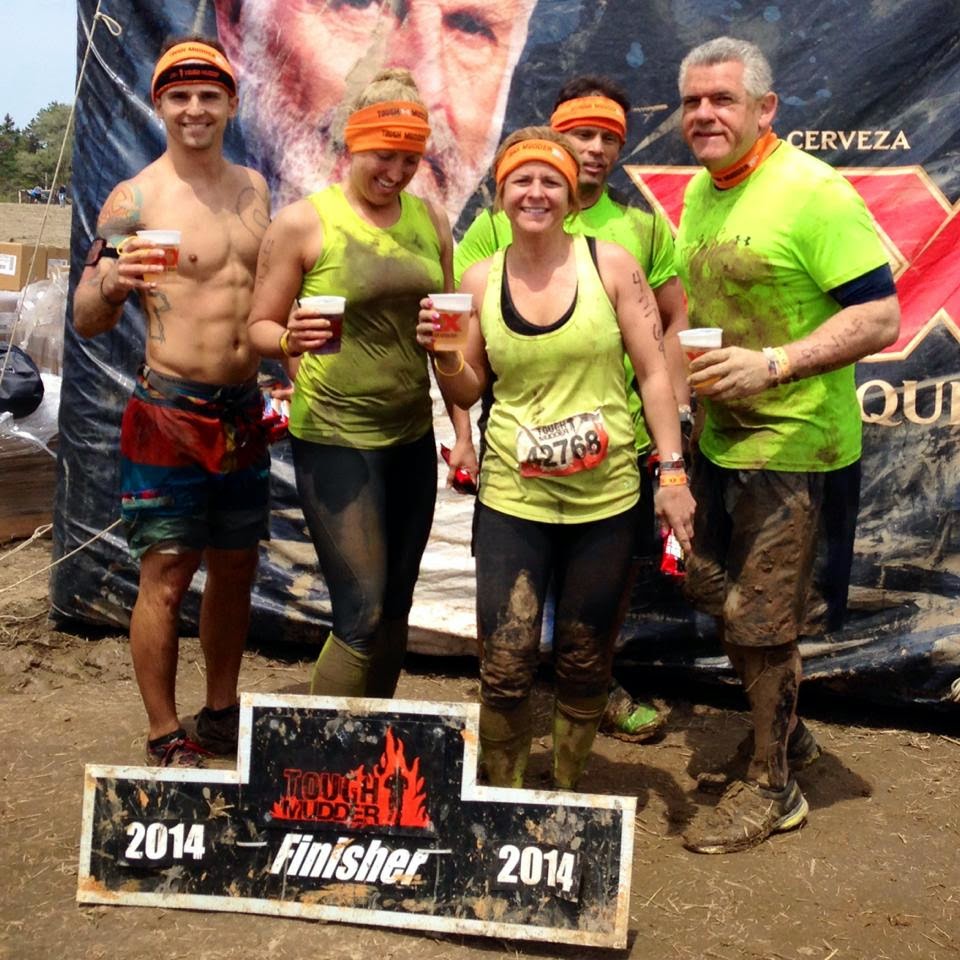 OHVENTURES: What is the most fun obstacle or Tough Mudder situation you've been in?
JOHNNY: The most fun is running with people you know and meeting new people! Everyone there has the same goal in mind - make it to the finish! My Chicago experience was by far my best encounter with new Mudder friends. I was on my second lap of the day when I started to talk with Heather while running. Little did I know she was with a group of three, Renee, Mike and Tom. Once I met everyone I ran the rest of the course with them. Helping them complete all obstacles and crossing the finish line with them. It was a great and memorable experience.

OHVENTURES: Which TM that you have run has been your overall favorite or most memorable?
JOHNNY: I would say that my favorite one overall was with my mom in Florida. She lost a lot of weight a couple years ago and she displayed courage and self discipline throughout the whole process!

OHVENTURES: What would you say to someone who is scared out of their wits about doing a TM to encourage them to do it?
JOHNNY: Tough Mudder isn't meant to scare you, it's meant to help you overcome your fears. So many different kinds of people that are scared do it every year, and when you see them cross the finish line you see the biggest smiles on their face. Don't let being scared hold you back. 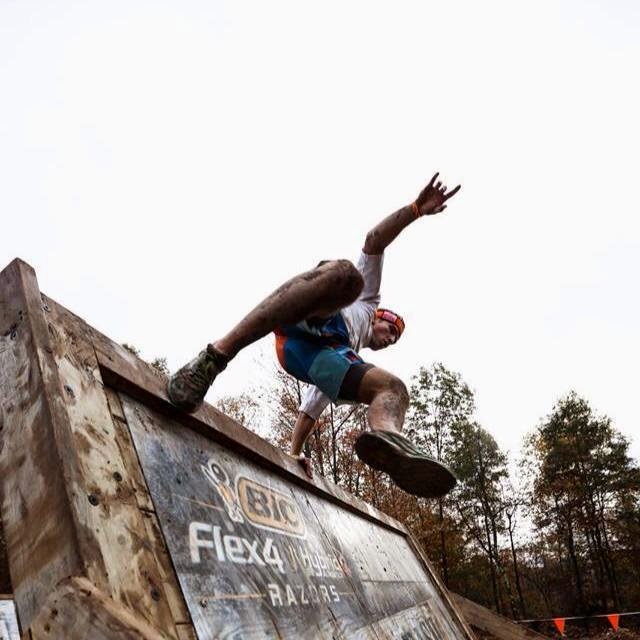 OHVENTURES: How long does it take the average person - and how long does it take you - to complete a TM?
JOHNNY: I would say it takes the average person 3-4 hours to complete a TM depending on course length. My average time just depends on length and weather. My fastest lap at a tough mudder was in Chicago this past weekend. I ran my first lap in 1 hour and 40 minutes. My slowest was probably my first TM at around 3 hours and 30 minutes. 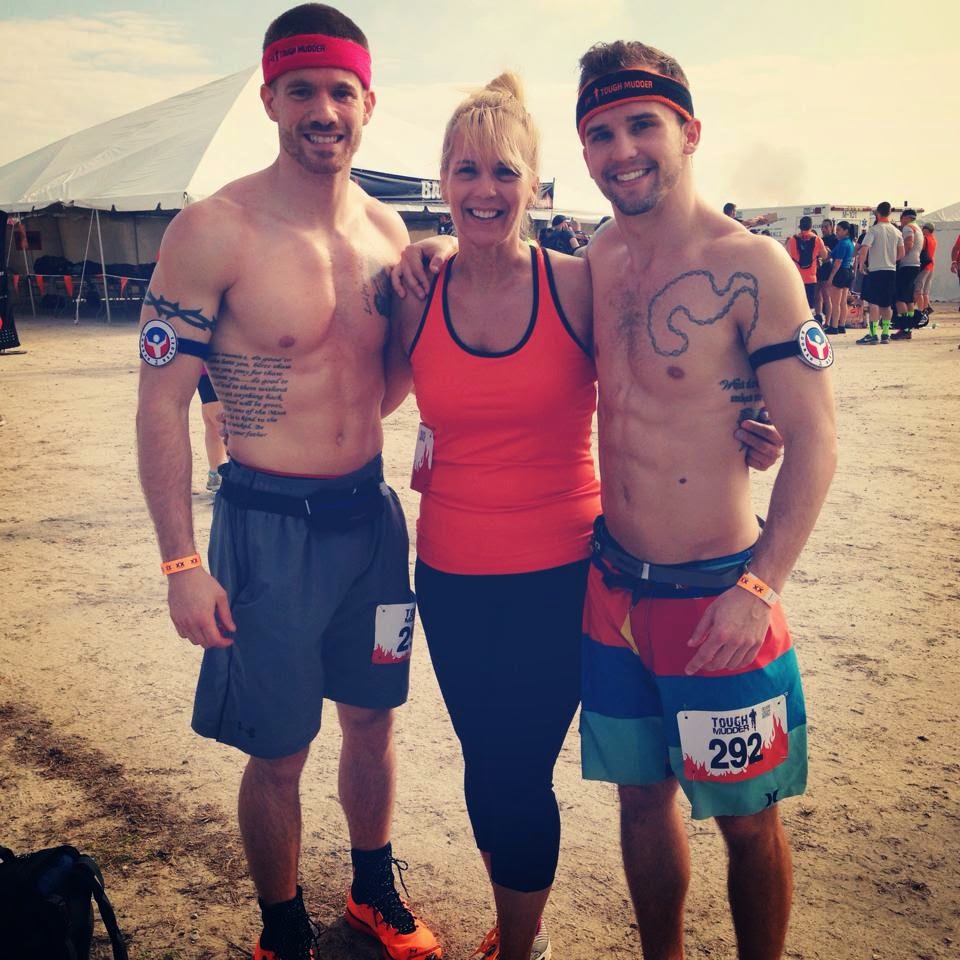 OHVENTURES: What are some personal accomplishments or awards you've received along the way?
JOHNNY: TM has started to reward Mudders this season with the Mudder Legion. It rewards multi Mudders with different color headbands that signify how many they've done. I have the highest legion.