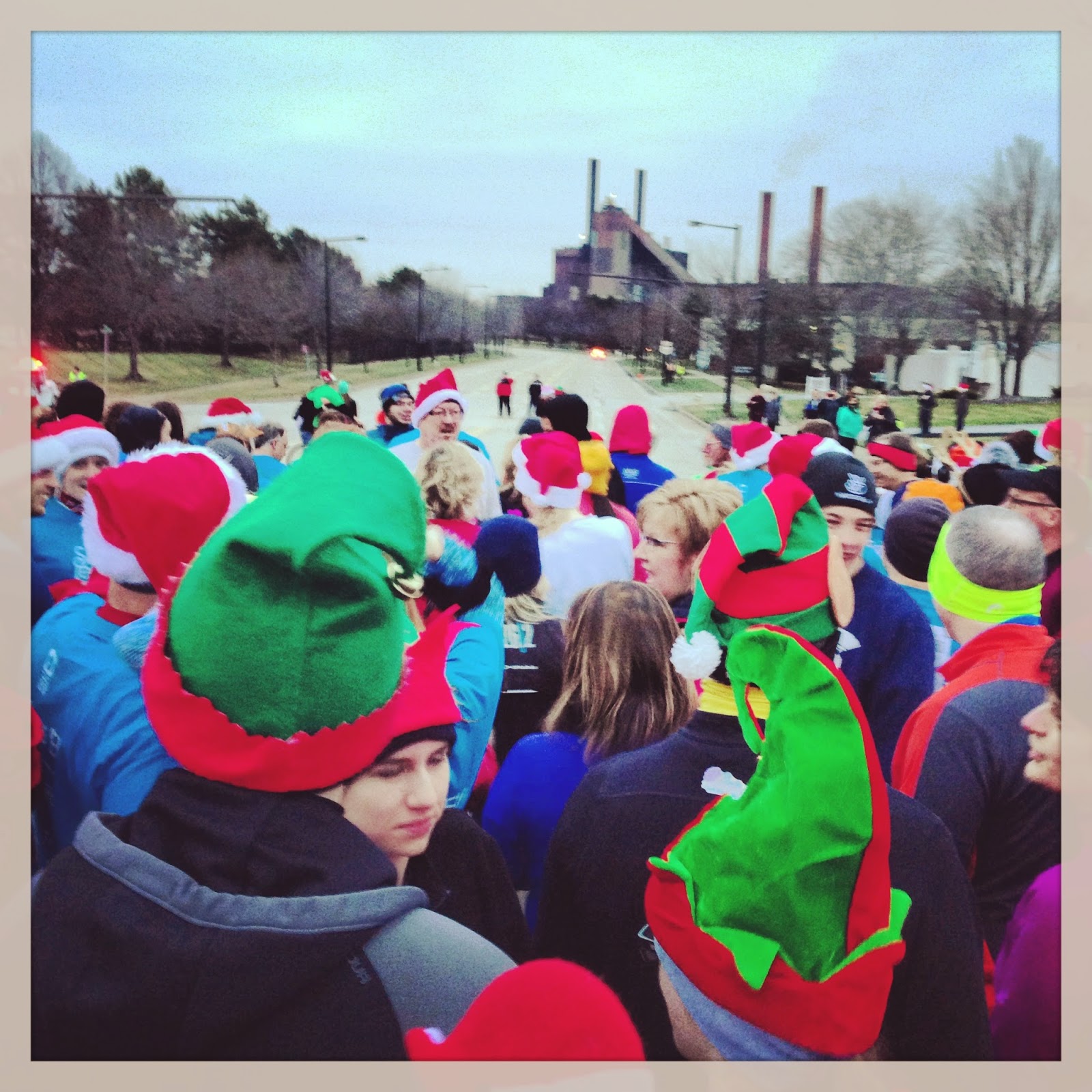 Photos by OHventures and the Akron-Canton Regional Foodbank

"It's not how much we give, but how much love we put into giving." - Mother Teresa

The Akron-Canton Regional Foodbank has done it again with their 2nd Annual Selfless Elf 5K run in downtown Akron!

The Selfless Elf 5K is quickly becoming one of my favorites, mainly due to how much I care about the local foodbank, which has recently been named as the BEST foodbank in the entire country. The theme behind the run is, on the surface, lighthearted and whimsical, with people of all ages decked out in holiday garb (most of which were elven in nature of course).

However, there is a much deeper and more meaningful underlying theme of the race, which was to think of the less fortunate during the holiday season, and to give selflessly (get it?) to help fight hunger in the area. 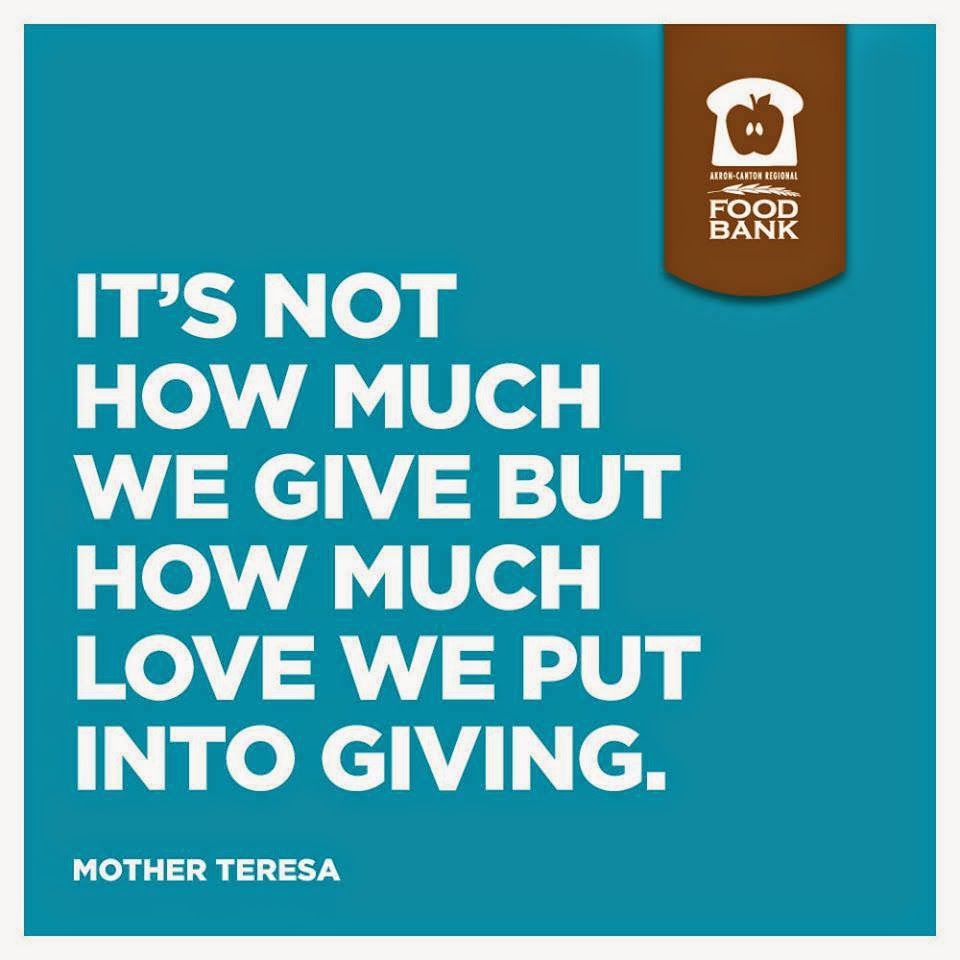 Unfortunately, I misplaced my elf ears that I wore in last year's run. But, thankfully, all runners receive elf socks for registering. I threw those on, along with my Santa hat, to get in the festive spirit. I also wore a t-shirt from work, to match the others in our "Young Professionals" group that just started this fall. Being the Volunteer/Service Board Chair of the YPs, I organized our group to get together to help the cause.

Some members of our YP group gathered for a quick photo (below) with "Olaf" (of Disney's "Frozen," of course), and we gathered at the start line located on Opportunity Parkway in downtown Akron. 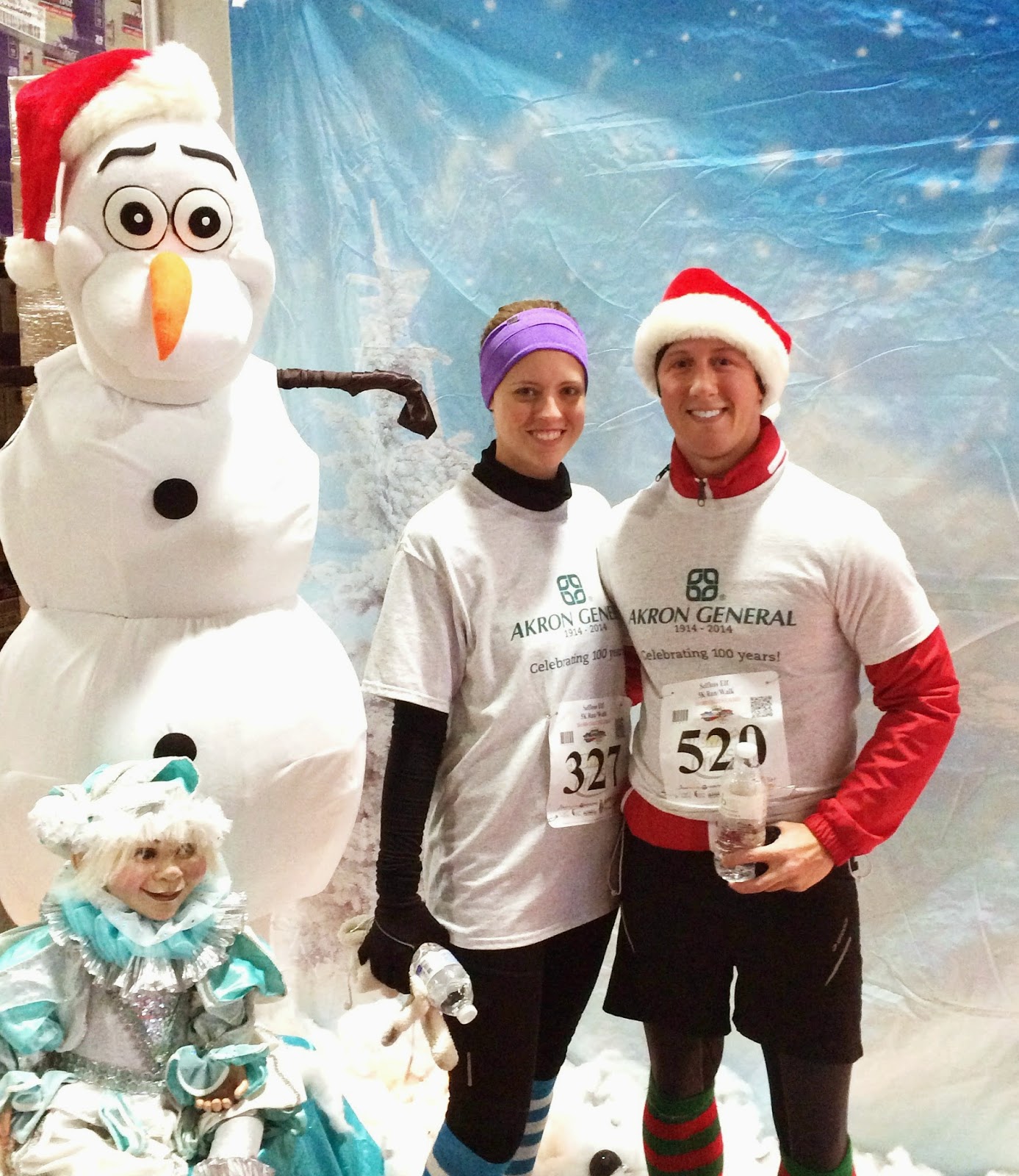 In addition to current co-workers, I was also treated to seeing former co-workers from Columbus, like my friend Mike (photo below) at the race. We had been wanting to do an event together for a long while, and finally got the chance to do so, since he is from the Akron area and was home for the holidays.

Mike & I kept a very gentle pace of approximately 9 minutes/mile (at my pique, I was doing 7:30 minute/miles). Lately I have been taking it rather slowly in my races (Gobble Wobble, Christmas Story Run), because I have not been practicing as much lately in between official races. My theory is: "no matter how slow you go, you are still lapping everybody on the couch." The event was a HUGE success - with hundreds and hundreds of selfless elves flooding the city streets all to raise money and awareness for the hungry in Northeast Ohio. Hats (and ears) off to all of those at the Akron-Canton Regional Foodbank for making this a reality! 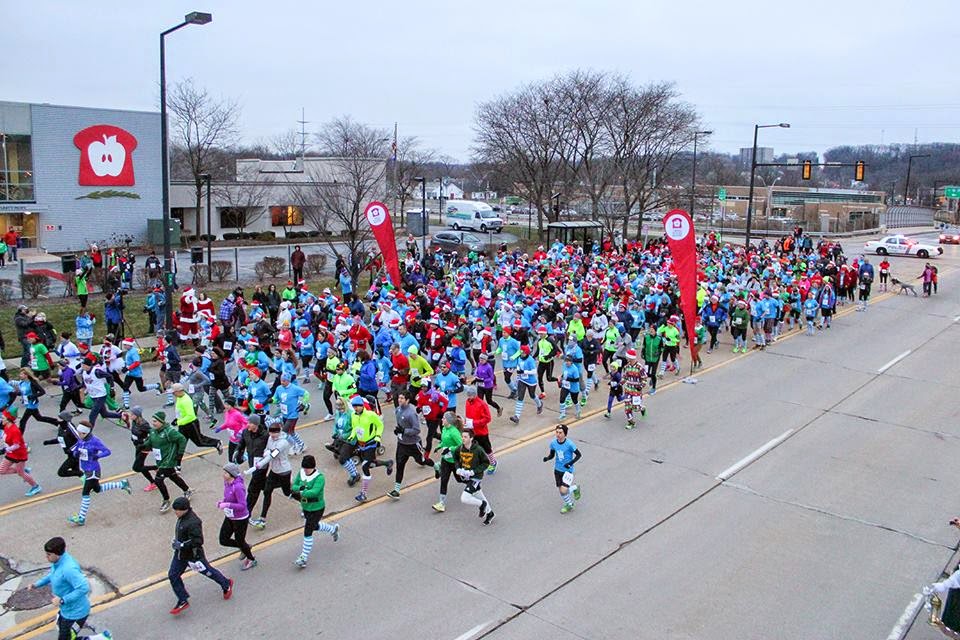 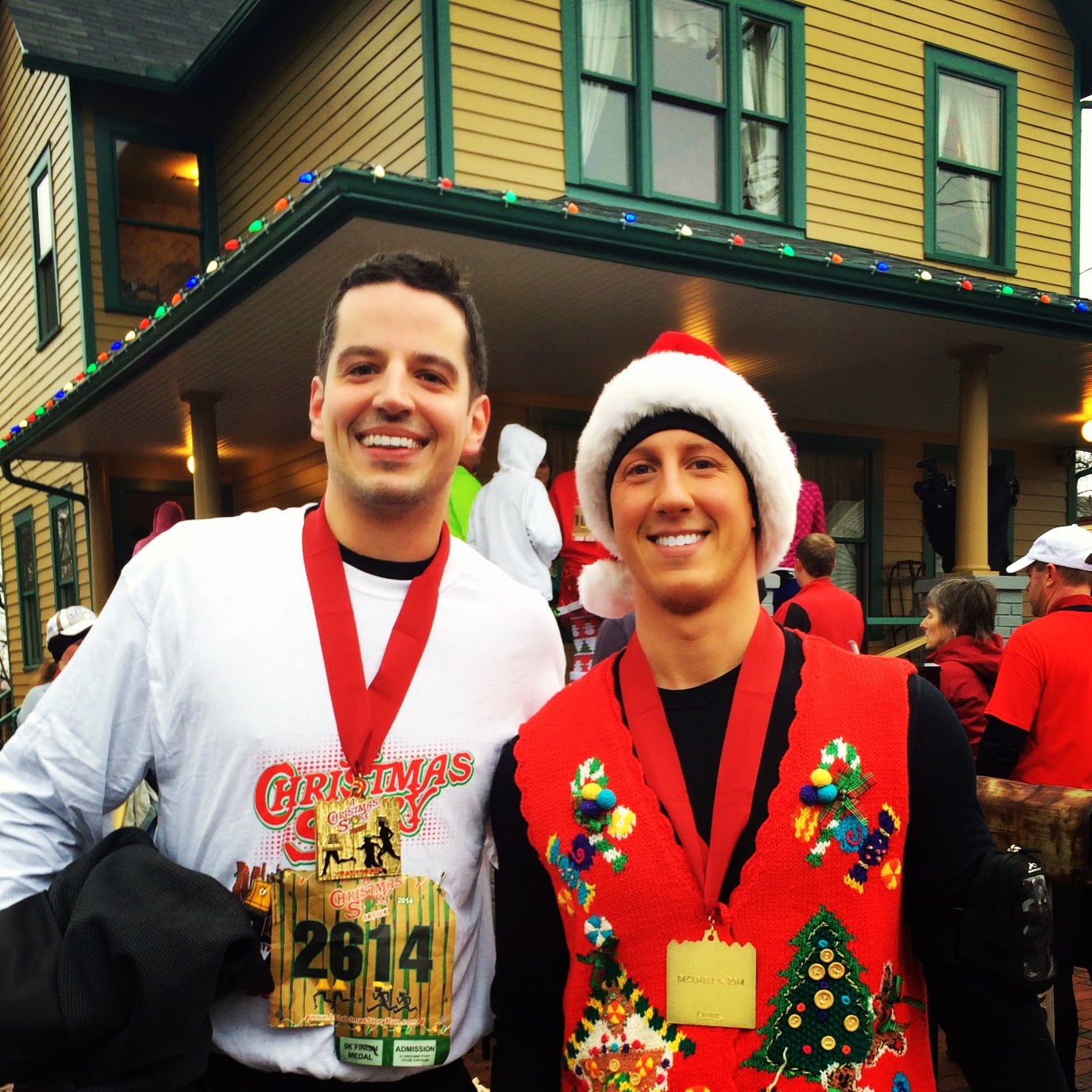 We all know the tale of little old Ralphie - the boy who wanted nothing more for Christmas than a Red Ryder Carbine Action 200-shot Range Model air rifle, but was repeatedly denied of his request by Santa, his teacher, and his parents - all warning him by retorting, "you'll shoot your eye out!"

We followed Ralphie throughout the cult classic movie "A Christmas Story" on his quest to convince others he should get his prized BB gun. Along the way, we are introduced to such iconic scenes and images, such as the pink bunny suit, the tongue frozen to the flagpole, and of course the infamous leg lamp!

The movie is played every year during the holiday season - including a 24-hour repetitive showing on TBS on Christmas Day. If you haven't seen this 1983 movie (set in the 1940s), then you are certainly missing out on a huge piece of American culture! 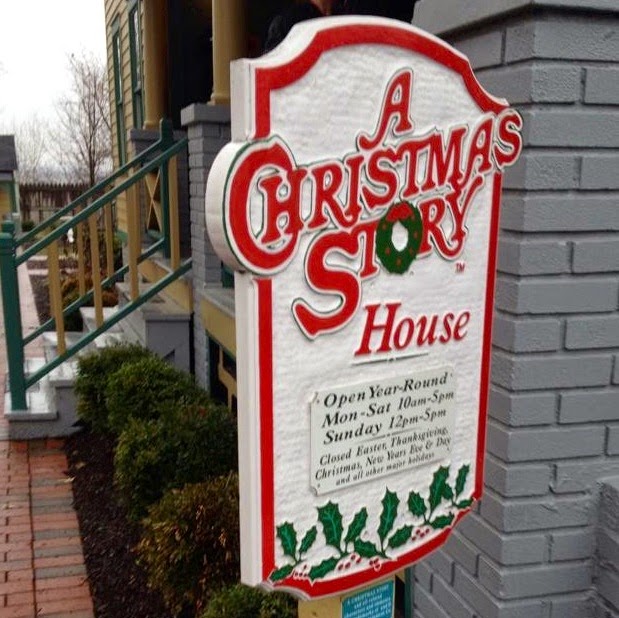 What some people might not realize is that a large portion of scenes from A Christmas Story were filmed in the Tremont neighborhood of Cleveland. The home of Ralphie and his family can be found at 3159 W. 11th Street, still standing in all of its yellow and green glory - gawdy Christmas lights and tacky leg lamp still visible year 'round. The house is open to the public for tours 7 days a week, except for major holidays. The house was reconstructed inside (since most of the interior shots were filmed on a sound stage) to resemble the interior from the film.

To celebrate the film's popularity, and to raise money to galvanize the neighborhood and provide upkeep for the landmark for years to come, the Downtown Cleveland Alliance and A Christmas Story House Neighborhood Restoration Project have created the A Christmas Story 5K/10K in 2013. 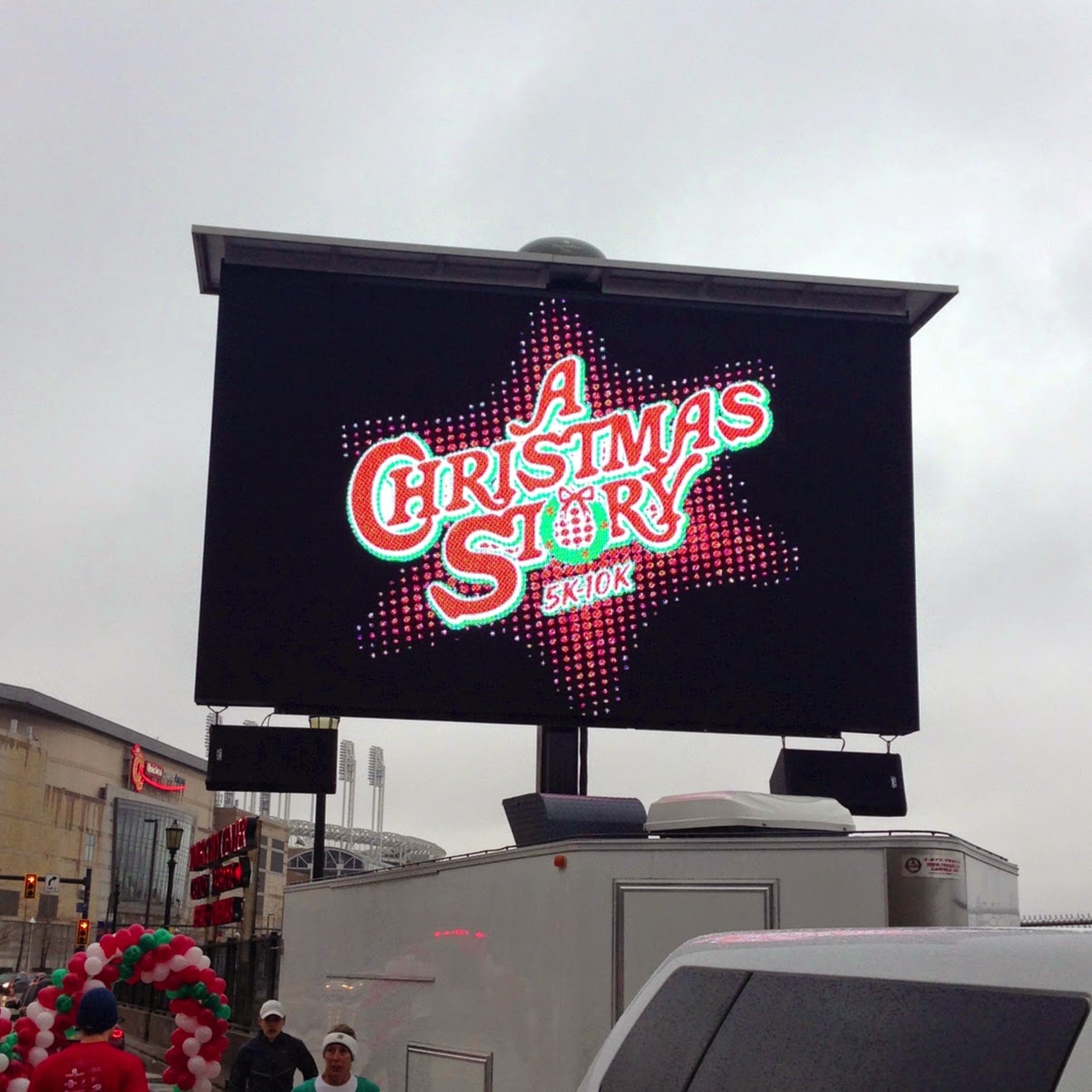 The race starts in Public Square in downtown Cleveland, with the 5K finish line located directly in front of the A Christmas Story House (and the 10K finish line located where the race began). Race participants receive great swag, including a movie-themed medal and t-shirt, and loads of post-race fuel, the most important of which being "rich chocolate Ovaltine," as enjoyed by Ralphie himself.

Best of all, runners receive a ticket (located on their bib) to enter and tour the house for free! 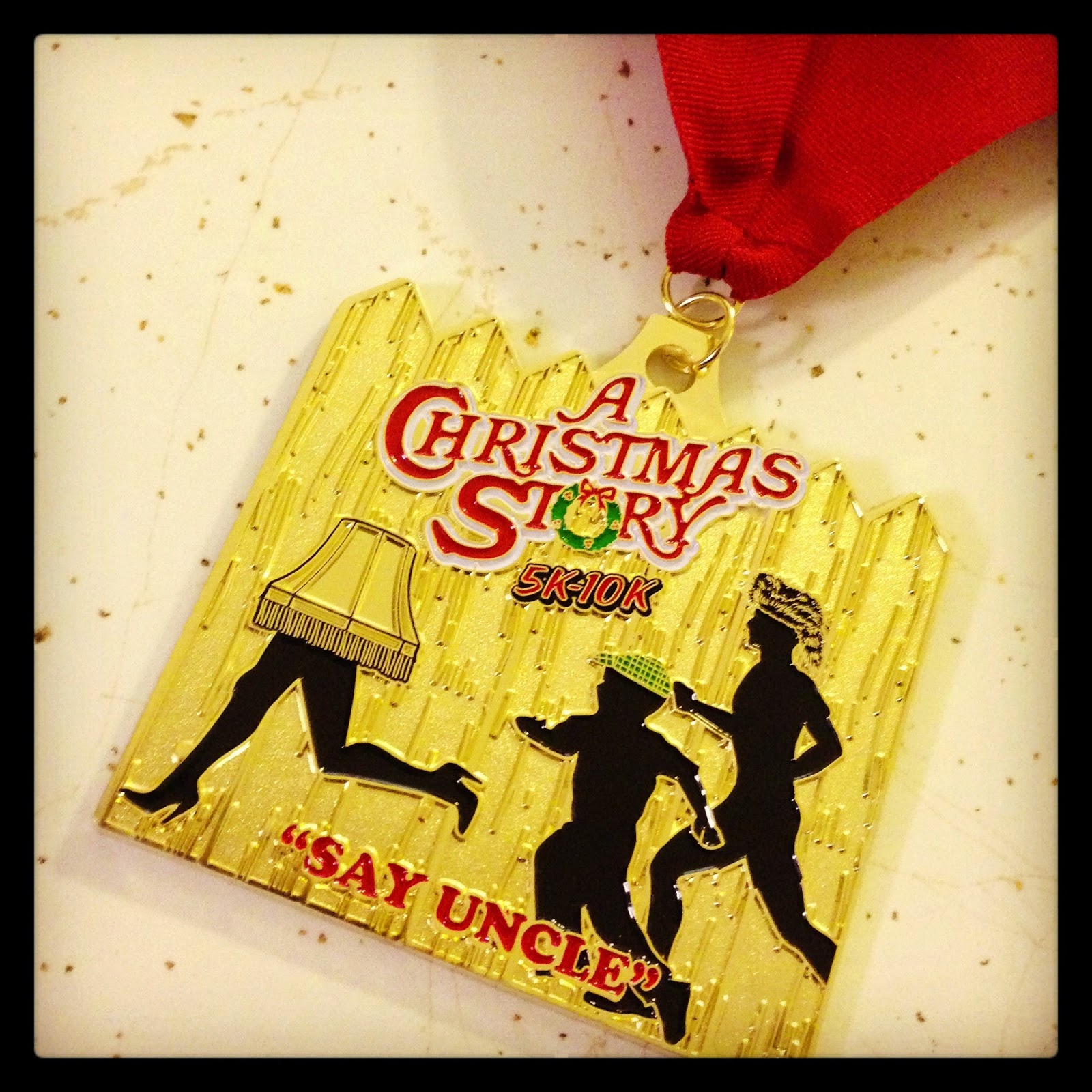 Of course, I had to jump on the bandwagon to run in this race on December 6, 2014. It contains so many elements of the things I love: running, Christmas, and a healthy serving of childhood nostalgia!

I was certainly not alone in the nostalgia department, as many folks were decked out in costumes inspired by characters in the film - there were burglars (from a dream sequence in which sheriff Ralphie "shoots" a bunch of intruders), pink bunnies, elves, and even leg lamp costumes!! 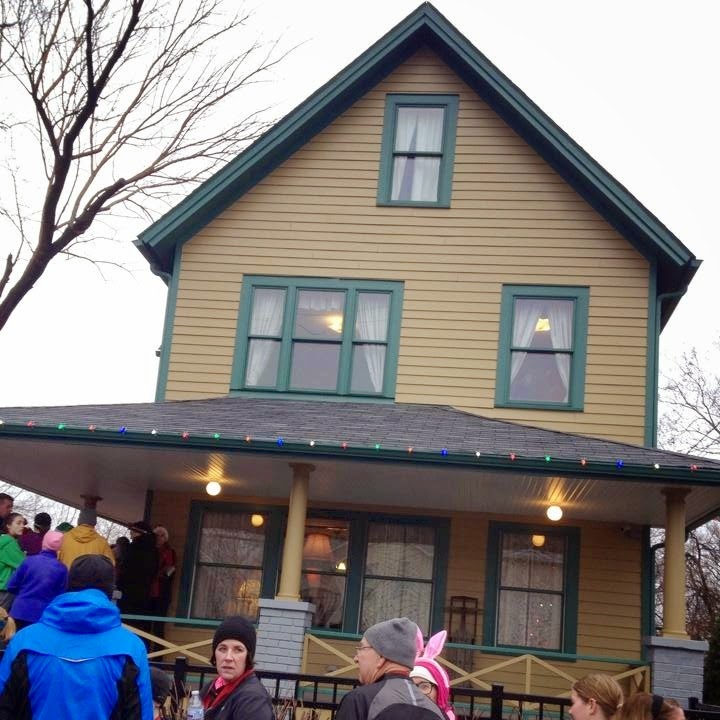 Because I decided late in the game that I would make the trek to Cleveland to run, I had to settle with an ugly Christmas sweater and a Santa hat. They did the trick for sure! I met up with my fraternity brother Jason (who now lives in town) and we ran at a leisurely pace in the chilly lakeside air. We completed the run in approx. 28:36, retrieved our swag, and gawked in marvel at the A Christmas Story house (photo above).
Posted by Mike at 3:51 PM No comments: 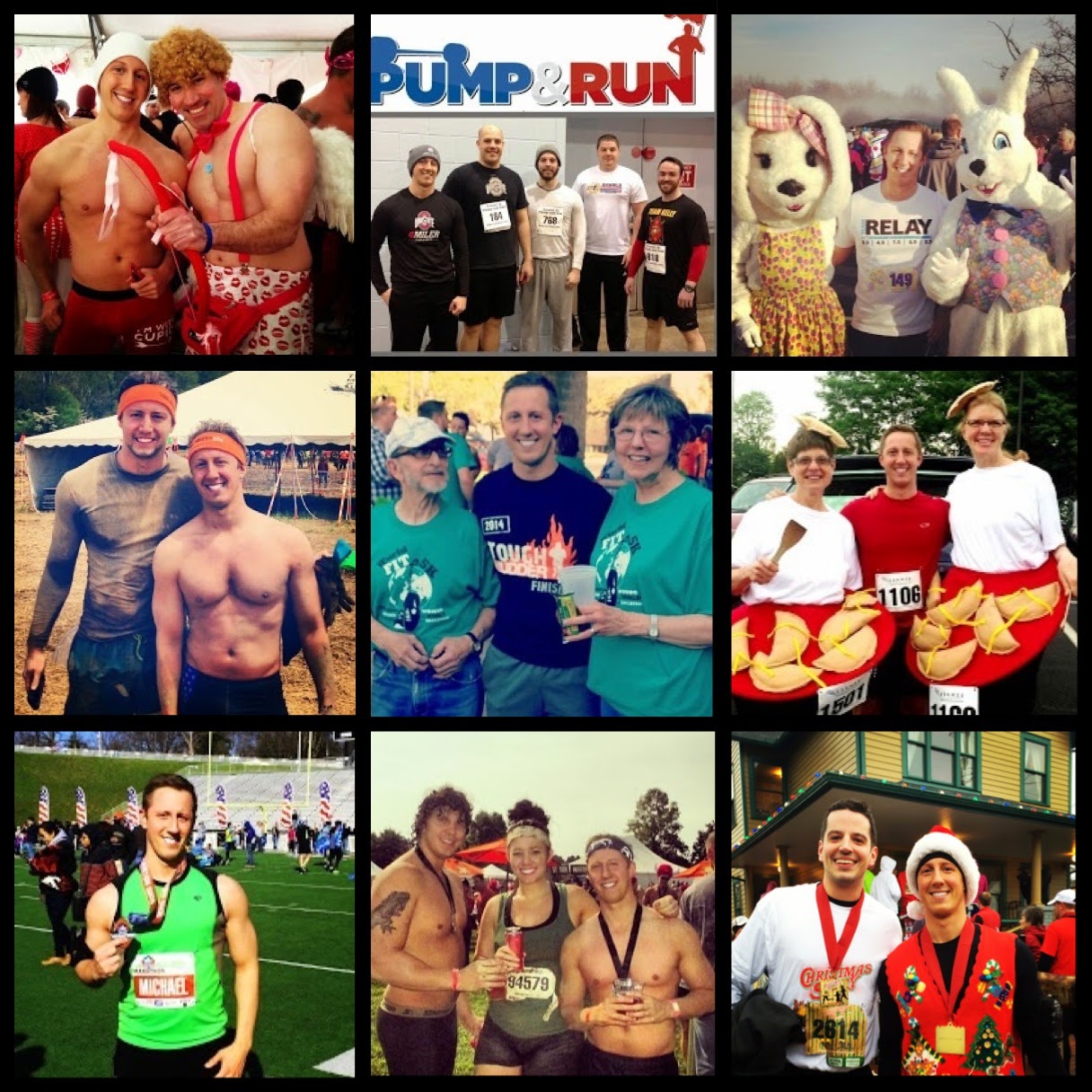 It wasn’t planned, but I ran 14 Races in 2014 (AKA “14 in ’14”) in Ohio.
Most of the events had a fun element or theme added in, such as running in nothing but your underwear (Cupid’s Undie Run) or running to get delicious food at the finish line (Slavic Village Pierogi Dash)! Many were done to support a cause, such as the World Fit 5K or the Selfless Elf (to support the local Foodbank). Most were 5Ks, but some were longer, such as the Pro Football Hall of Fame Half Marathon.

I also added two more runs that were not done in Ohio (both in Pennsylvania). I do feel a bit like a cheater for putting them on this site. Either way, I am happy to have successfully completed over 76 competitive miles in one year!
Below, you can find links to all 14 of these events from 2014 in chronological order! Hopefully these can give your ideas for races you can run in the New Year! 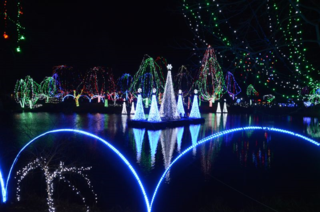 The following is a post that can be found in its entirety on Discovering Ohio, the Ohio Division of Tourism's official blog. OHventures partners with Discovering Ohio and contributes monthly articles. This post was written by Discovering Ohio blogger Anietra Hamper. We wanted to include it here due to our love of "zoo lights" in Ohio!

There are few holiday traditions that can compete with strolling through the Wildlights display at the Columbus Zoo and Aquarium on a chilly December evening.

The smell of fresh kettle corn in the air, my cup of hot coco to keep me warm and the sounds of holiday music and excited children provide a festive backdrop.

This is a winter wonderland of three million colorful, twinkling lights that whisks me away to that magical place where Christmas comes to life.

I set out to North America to look for Santa’s reindeer and stop along the way to marvel at how fascinating is to see the zoo in such a different light - literally. Zoos throughout Ohio are giving visitors lots of reasons to bundle-up and head out in this winter.

READ MORE AT DISCOVERING OHIO
Posted by Mike at 7:52 PM No comments: 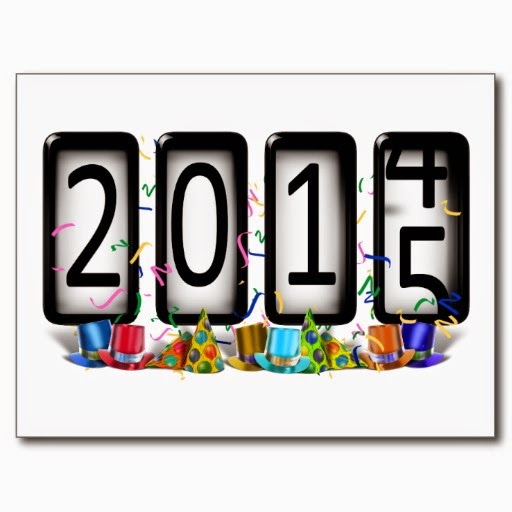 Out of any other year, I feel that 2014 put the most miles on my odometer. I drove to every corner of the state - Toledo to Athens to Geneva to Cincinnati visiting friends, attending weddings, working, and of course adventuring. In doing so, I definitely had a year full of unique experiences. As with every year (see 2012 and 2013), I give to you the Top 10 OHventures of 2014. There were many to choose from, but if you needed to see the best of the best, here they are (in no particular order)!

1. The Lodge At Geneva-On-The-Lake: The romanticism of Ohio's Lake Erie shoreline is encapsulated to perfection at the upscale yet affordable Lodge at Geneva-on-the-Lake. I stayed here for a weekend in June and saw for myself all the fantastic pleasures that can be unearthed while staying at this hot vacation spot.

2. Mohican Tree House Cabins: Halfway between Cleveland and Columbus is an adventurer's paradise, an outdoorsman's dream, and one of the most unique attractions found in all of Ohio: The Mohican Treehouse Cabins. I stayed overnight in these AWESOME accommodations!

3. Bon Appetit Appalachia!: I had the privilege to witness a glimpse (and sample a taste) of this innovative farm-to-fork concept on a visit to Athens - the setting for a large number of these culinary destinations in the state. Follow me as I eat - and drink - my way through Appalachia!

4. Tree Frog Canopy Tours: Another year where a zipline locale makes the list! This time, we made our way BACK to Mohican Country for the tallest, fastest, and longest zip line in all of Ohio! Pictures say 1,000 words.

5. Tough Mudder Ohio: If you think that a 3-mile obstacle course like Warrior Dash is crazy, then you ain't seen nothing yet! The Tough Mudder was 12 miles of muddy mayhem in Mansfield, trumping anything I've ever done before! And how can I EVER forget the arctic enema and the electroshock therapy?! I must be a masochist.

6. Akron Birthday Bash Dash 5K: This was a very special 5K walk/run for me, because it was the first time ever that - instead of running the course -  I ran the ENTIRE event as the race director! The 5K in Stow was a TON of work, but proved to be a success, raising money for Muffins For Mammograms & celebrating the 100th "birthday" of the health system.

7. Columbus Pedal Wagon: My family & friends hopped aboard this contraption that required us to use our man-power to wheel the wagon from bar to bar to bar in the streets of the Short North one football Saturday in October. Check it out in Cincinnati as well.

8. Kayak The Bay at PIB: Between drinking wine and barhopping on 4th of July weekend in Put-In-Bay, a group of college friends decided to get a workout in and kayak the beautiful waters of Lake Erie surrounding South Bass Island.

9. Polar Plunge: A polar plunge (also known as a polar bear jump) is for the bravest of brave and the craziest of crazy! I participated in the Polar Plunge at Mosquito Lake State Park in Cortland on January 18 as a benefit for the Special Olympics of Ohio. Even the photos make me shiver. 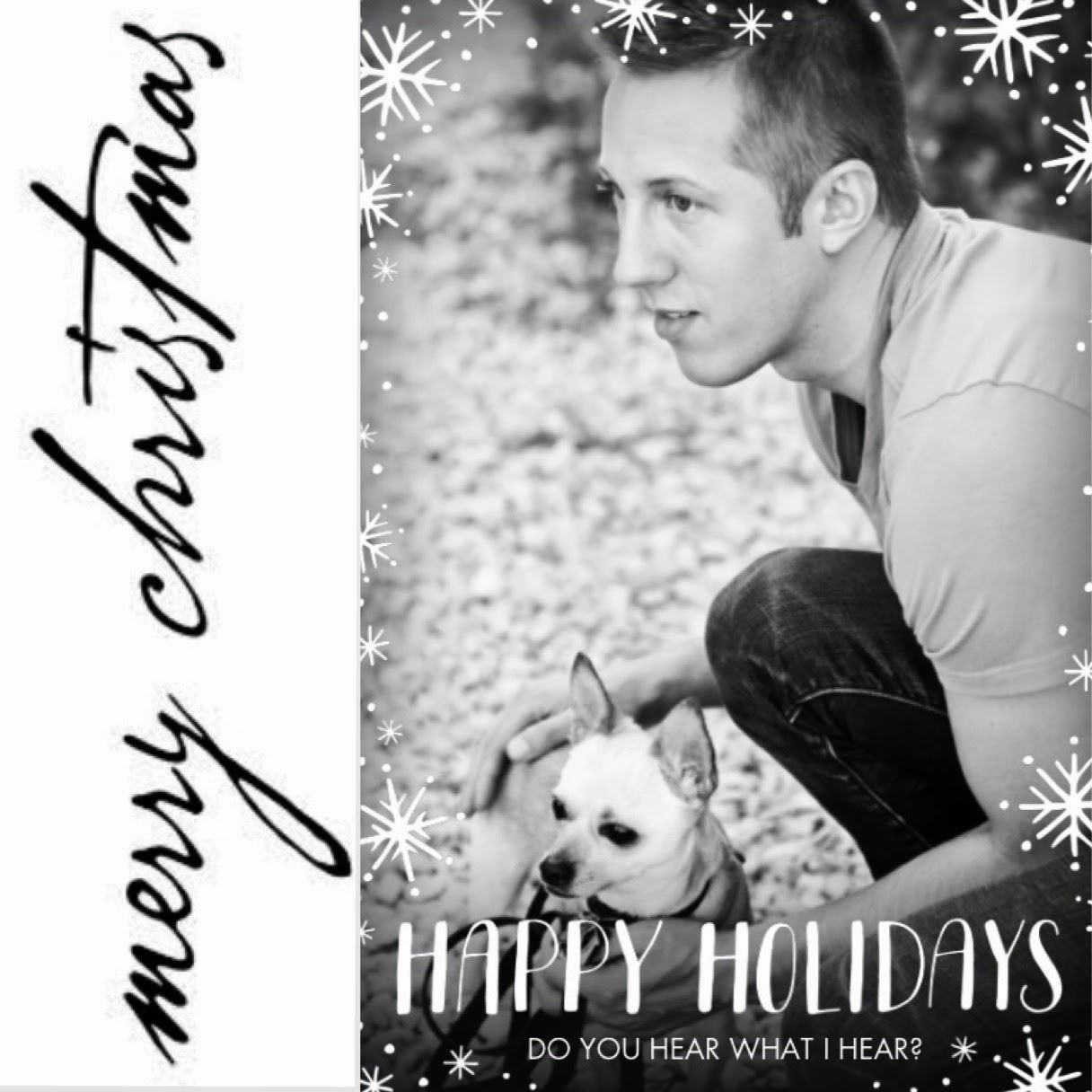 Merry Christmas, Happy Holidays, and Happy New Year to all of my readers of OHventures! Thank you so much for your continued support in my quest to show everyone just how cool Ohio can be! May the next year bring you an endless thirst for adventure! See you in 2015!
Posted by Mike at 8:18 PM No comments: