My family recently took a trip to the two wineries found in Trumbull County (where my hometown of Hubbard can be found).

Our first stop was Country Porch Winery, which is described as being "nestled in the heart ofTrumbull County." We found this to be true, as the quaint winery looked more like someone's home along the wide open roads of the City of Cortland. Its long porch was filled with tables made out of interesting items, such as barn doors, wine barrels, and the like. Folks sat on rocking chairs near the door and a dog greeted us as we made our way inside.

For just $4 a piece, my family and I opted to taste all 10 of the wines offered at Country Porch. This was not only an amazing deal, but it was also the best way to uncover all of the fun backstories behind each of the wines made here. Each wine was unique and stood out from the others, and I enjoyed and appreciated the thought that went into the flavor profiles!

For instance, the "Daisy For Me" (my favorite wine of the evening) was a dry white wine  that was named in honor of the owner's mother. The "Certin Gold" was appropriately a golden colored white wine rich in flavor that was named after an award-winning stallion raised on the property. "Celebrate d'Vine" was a seasonal wine that burst with apple and cranberry flavors. And the "Scenic Route" was an extremely odd wine with a "hate it or love it" attitude (I hated it, but my brother bought a bottle)!

The Country Porch offers fun events and specials, such as pizza nights, steak nights, painting parties, and more. It was sad to leave, since we enjoyed our stay so much, but we had to head up to our next winery of the night!

The Greene Eagle Winery was located approximately 15 minutes from Country Porch, also in Cortland. There was a fancier feel here and there was even a wedding taking place on-site when we arrived.  Inside, there were tables on the lower level and a loft upstairs. There was also a nice selection of gifts and merchandise.

We opted once again for the tasting platter so we could sample all of the wines made here. Unlike our previous stop, however, there was not a narration that accompanied our tasting, which is not necessarily a bad thing. We drank up the little wine cups from sweetest wine to dryest wine.

There seemed to be far more sweet wines than dry wines. Some memorable choices were the "Tranquility" which was a pear/kiwi wine, "Midnight Embers" which tasted exactly like a chocolate-covered strawberry, and the "Blackjack" which was my favorite.

Our trip was a huge success, and we left with big purple-tooth-filled smiles on our faces as we discovered more awesome wines made right in Ohio!
Posted by Mike at 11:37 PM No comments: 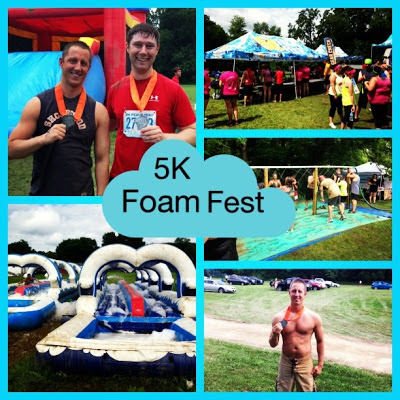 Described as running through a "giant carwash," the 5K Foam Fest on June 29 had me STOKED for down and dirty fun! This year, FOAM is the new mud. With a plethora of obstacles to tackle, including mud pits to get you really dirty, and foamy pits to get you really clean, the 5K Foam Fest was going to be a wild and unique experience (just what I like)!

Taking place in the Appalachian foothills of Logan in Hocking County, this mud run was destined to be one intense undertaking. Much like the Warrior Dash race I ran in Carrollton, I knew that there would be monstrous hills along the course that would serve as the biggest obstacle of all! And, boy was I right!

The setting for the 5K Foam Fest was Kaeppner's Woods, a major camping destination, and a frequent host to various mud runs (try the Superhero Scramble on August 3 or the Great American Mud Run on September 14). This park is located just over an hour away from Grandview, where me and my pal Jared both live. It had been close to 10 years since Jared had run his last 5K (let alone a mud run), and needless to say he was rather reluctant to the whole idea! But, I used my charming ways to convince him to let loose and join me on the drive out to Logan for something a bit outside of his comfort zone. 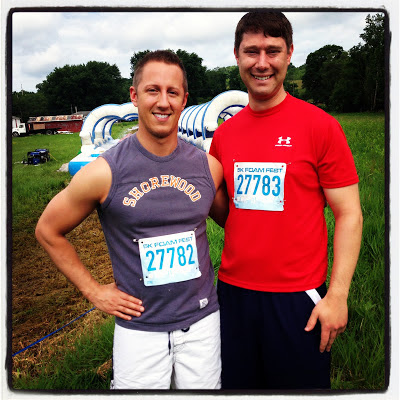 Our wave was at 11:40 AM, so we naturally left bright and early at 9 AM so we would have enough time to stop for coffee (potassium in black coffee is actually really good for you before a run, FYI), drive through scenic Southeast Ohio, and get familiar with our surroundings before the wave took off! While we had bibs (which I had picked up from Road Runner Sports the day before), the race was in fact not timed, which was rather disappointing to me. I estimated that we would complete the race in about 50 minutes. Jared (having never run a race full of obstacles) thought that was way too long of a race time, but soon found out that I was pretty accurate! 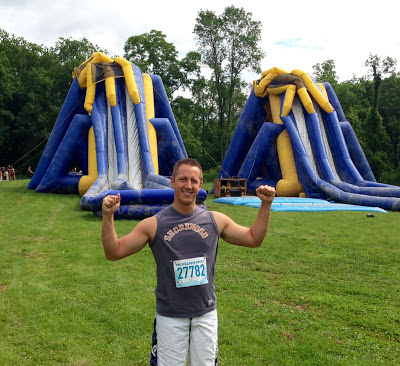 Before I realized that the slides were indeed broken!

After we parked, changed, stretched, fueled, and peed (TMI?), we took a look around at parts of the course that we could see on our walk from the car to the starting line. We were very disappointed to discover that the massive "Death Drop" inflatable slide (pictured above) was out of commission because some jackass from an earlier heat had cleats on and ripped through the plastic! This was not a good sign. The giant slide - which was said to be the largest in the world - was advertised as one of the highlights of the race.

Despite the broken slide, Jared and I still had high hopes. We saw a lot of people walking away with goodies, and we saw a tent of free Mike's Hard Lemonade, so we knew that there'd be some handsome rewards waiting for us at the finish line. I also ended up seeing an old high school buddy, Scott, with some of his OSU friends which was a pleasant surpirise (it really is a small world after all).

With about 15 minutes until our start time, Jared and I got ourselves to the front of the pack near the starting line. Soon, we heard the DJ advise us to "not eat the foam" as loads and loads of suds came shooting out from the archway above us! we passed the soapy stuff around, basically taking a clothed shower before our run! The horn blew and off we went! 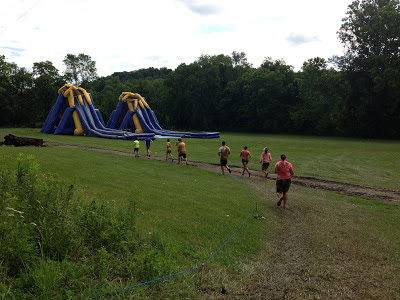 It wasn't long until we were greeted with our first obstacle, The Stumpy Jumper, which was a giant inflatable bouncy ball arena with hidden pits full of foam and water! Jared took a huge tumble and even got a mouthful of suds in the process! But we didn't let this slow us down! We kept running along the course to soon find a wooden wall to scale over, followed by my very favorite of the obstacles: The Lily Pad! Here, you basically had to run on top of floating rafts across a small pond. You had to run at full force and you couldn't stop, otherwise, you would start to sink! It was a load of fun "walking on water!"

The inevitable GIANT ass hill came next. It was hands down the toughest part of the course!!! It felt like we were scaling a mountain - a very, very muddy mountain that seemed to keep going and going forever and ever. Seriously this thing was a beast. And a bitch. This is where I left Jared behind. He said there was no way that he or anyone else could keep up with my pace. My philosophy was that I would go as fast as I could so I used my momentum to propel me up quicker and prevent me from falling. It definitely drained me of some energy, but it also got my adrenaline pumping! I kept going and going just like the Energizer Bunny!

At the top of the hill, there were a few folks who had stopped to rest, and some who had even stopped to give up, as they physically just could not go any further. There was also a small "Trip Wire" obstacle at the top before you had to take the path to the bottom of the hill, which was almost as challenging as going up the hill! 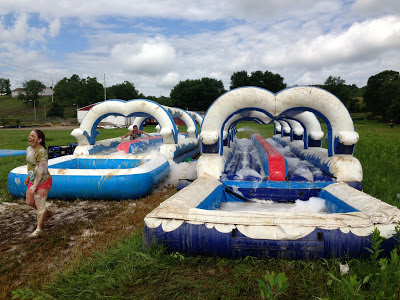 On level ground once again, there was a fun series of obstacles I zoomed through: the colorful and sudsy "Bouncy Ball Attack," the "Spider Web Forest," another dead foam obstacle that was ruined by someone's cleats, and the "Giant Cargo Net." I heard someone say that I deserved a high five for how fast I was going (sorry for the humblebrag). At the cargo net, there was a line, so Jared caught up with me and we did the last portion of the race together: the Water Crossing, 8 Foot Walls, Mud Pit, Electric Charged Barbed Wire, 30 Foot Slip 'N Slide (above), Inner Tube Crossing, and the Grand Finale: the 50 Foot Slip 'N Slide (below). 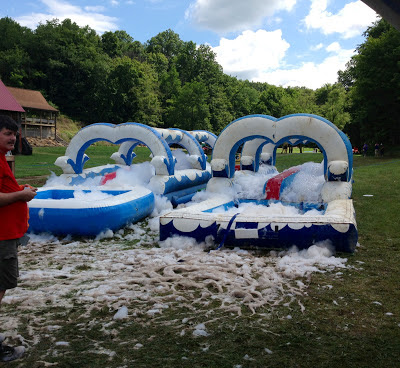 It was so thrilling to slide into the finish line (literally), get our medals, and gather all of our goods!! It was truly an exhilerating race and one of my favorites I have EVER done! We took some professional photos (post-race pics never ever turn out to be flattering, but I included it below anyhow), got our booze, and our complimentary food and t-shirts! After making new friends and gulping down our shandy, we stripped down (not in the nude of course) and rinsed off in the showers. 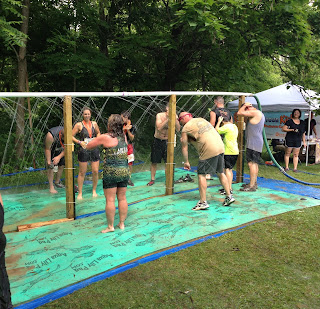 We had a few bumps and scrapes, but it's all in a day's work! Jared has definitely caught the running bug and is looking forward to running his next fun-filled race! If he can do it, you can do it! 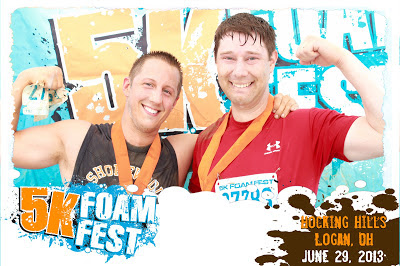 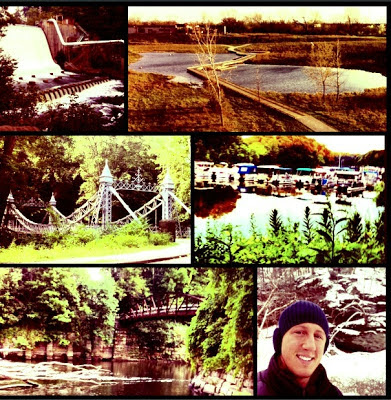 OHventures has compiled a list of 25 Great Ohio Hiking Spots, most from my personal experience and past reviews. And since people don't always have time to read through a ton of text, we made a quick, abridged version of our original list! Be sure to click here for the extended version to read more info on each location! 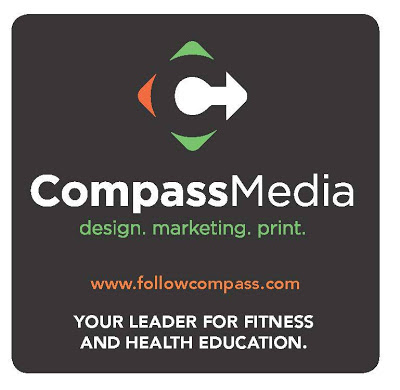 Compass Media is based in Canton, Ohio and is a leading publisher of magazines that educate the community in which we all live. Compass Media will issue several themed editions of its magazine, on the topics of: Medical, Health, Fitness, Animal Health Care, Higher Education, Building and Remodeling, Being Green, and Quality Family Living.
With its team of marketing experts, Compass Media is dedicated to providing smarter solutions for clients’ advertising and branding goals. Compass Media provides award-winning creative designs, brand development, printing and web design; and also creates its very own market segment publications that provide an educational resource for the community.
I am a proud member of "Team Compass," serving as a Contributing Writer, and I have thus far written three articles for the magazine: "Improving Your Lung Health" (Medical 2013), "Ohio Runner's Boston Connections" (Fitness 2013), and "Monumental Workouts" (Fitness 2013).
I also have participated in the photo shoot for the Fitness edition at the McKinley Monument in Canton. Compass Media gathered hundreds of fitness fanatics from the Stark County area to run the steps of the monument to accompany the feature story I had written. It was a cold day, but very enjoyable to be amongst such great company.
I will continue to contribute to Compass Media publications and I encourage you to "Like" them on Facebook, or pick up a hard copy of the magazine on newsstands in the Canton area. 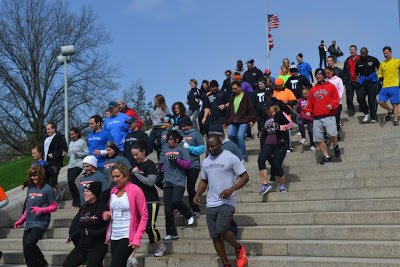 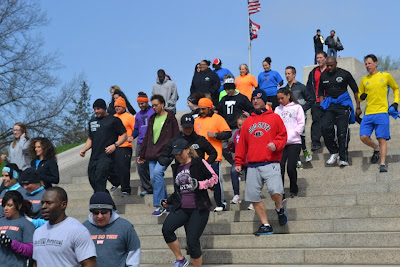 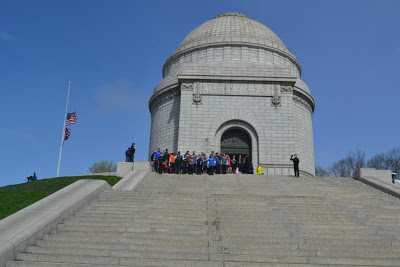