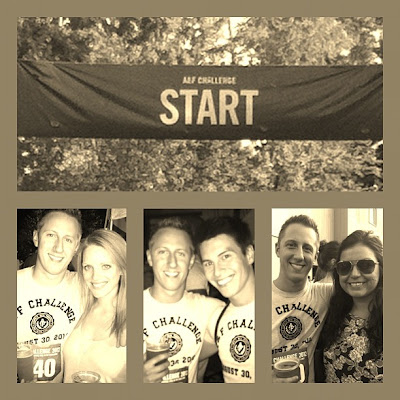 Back in the hey day of college, I enjoyed a brief stint at the Abercrombie & Fitch store at Easton Town Center as a member of the Model/Impact Team. Ever since, I have been rocking moose-adorned polos of every color (except black of course) and smelling as "Fierce" as the noxious cologne that is pumped throughout every mall in mid-America. A little known fact to folks not living in the 614 area code is that the Abercrombie & Fitch Home Office (or as they call it - campus), is located in New Albany, Ohio (a suburb of Columbus).

An even lesser known fact is that each year (for the past 11 years), the campus holds its annual A&F Challenge, which is a 5K and bike race that aims to raise $1 million for the James Cancer Hospital and Solove Research Institute. Friends of mine (Laura, Ryan, and Bryan) all work at the home office and invited me to come out and run! I of course accepted the challenge, knowing that my entry fee would go toward a good cause, and that I would get to do yet ANOTHER 5K (don't mind the fact that I had just days before ran the Warrior Dash and in two days would ride in the Akron STOMP Bike Ride). 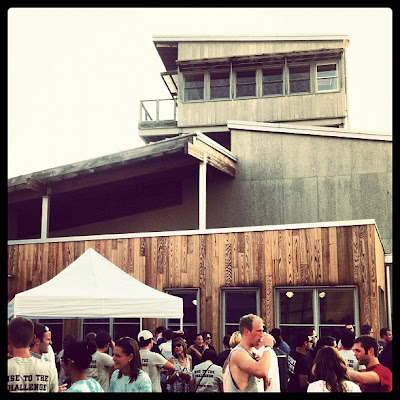 After crawling through rush hour traffic after work on Thursday, August 30, I made it to the secluded A&F campus in northeast Franklin County just in time for the race. My friend Laura gave me my bag of gear, I changed into my shirt, punned on my bib, downed a water, and lined up at the starting line! Amidst a group of cheering A&F employees and their guests, the announcer counted down and away we went!

Music was blaring (much like the kind you'd hear in any Abercrombie store across the country), which kept us motivated during the big run! I also kept my pace by picking a new friend out of the crowd and secretly making them my personal "coach" of sorts. I eventually made small talk with my secret pace keeper, whose name ended up being Wes. It made the race breeze by, and helped push me even when I wanted so badly to stop and walk. My knee was killing me by the end of the 2nd mile, but I managed to push through it as we zoomed through the well-manicured forestry of the snazzy A&F campus. 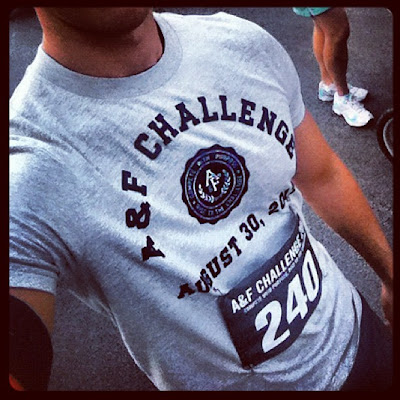 My final time was just over 27 minutes, which was fantastic given my history of 5Ks and my throbbing knee (my doctor is going to kill me for all of these races I insist on doing). I met up with my friend Laura (whose "guest" I was) and we made our way inside the home office building so I could use the restroom and gather my things. I bring this up because, apparently, this was a covert operation, since non-employees weren't really supposed to be inside! Scandalous! 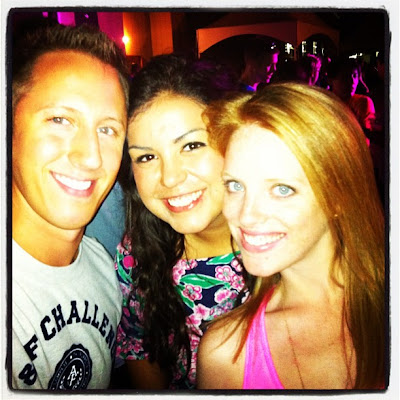 With a beet red face, we went down to get our free beer and food. The spread was amazing, as it consisted of pasta salad with squash, fresh fruit, and salmon! This was some high class post-race grub! We all chugged some booze and rocked out to Walk The Moon, the band who is responsible for the infectious summer tune Anna Sun! Hearing that song live, surrounded by all the pretty and beautiful people at the Abercrombie & Fitch campus, after completing a sweaty and challenging 5K race with friends (both new and old) was such a fantastic feeling. I am so happy I got to take part in such an exclusive event and help fight cancer!
Posted by Mike at 11:06 PM No comments: 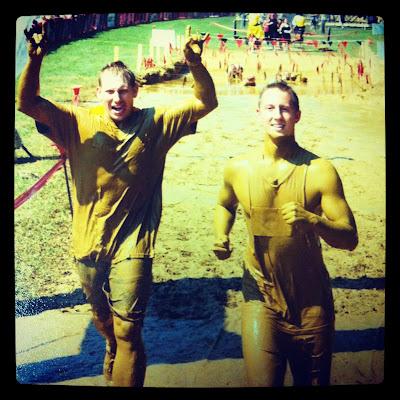 The Warrior Dash is the mud run that is taking the globe by storm! I took part in my first Warrior Dash last year in 2011 in Carrollton, Tuscawaras County. I struggled as I ran up and down extremely steep hills that were so muddy, they'd suck your tennis shoes right off of your feet. I trudged through mud, crawled under barbed wire, jumped over fire, and jumped in and out of trash dumpsters, among other obstacles. I felt like I would barf the moment I crossed the finish line (at approximately 47 miinutes). But, despite all of these seemingly horrible factors of the Warrior Dash, I loved every minute of it and have become hooked.

After my first experience (which took place on the birthday of my late brother Nick), I immediately decided that my brother Curt and I would absolutely have to participate in the next Warrior Dash that came our way! To make sure this happened, I bought my brother's registration as a Christmas gift for him. I am sure he wasn't too thrilled with having to wait an agonizing 8 months until he redeemed his Christmas present, but I knew it would be something he would love and would be such an amazing opportunity for us to bond as brothers. And I was right! 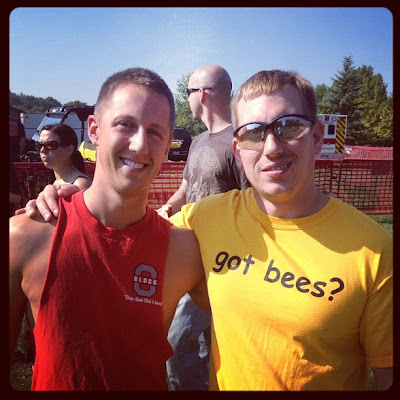 On August 25, 2012, my brother Curt and I, joined by his wife Regina, ran in the Warrior Dash Ohio II in North Lawrence, Stark County. It was an absolutely gorgeous day, and despite not getting a great deal of shut eye the night before, I was amped up and energized to take on the muddy obstacle course. Despite this excitement, I was indeed a bit nervous as well. I was worried that that hills would beat me up just like they did last year, worried that my knee I had injured running a half marathon would act up, and worried that -- GASP -- my brother would beat me! 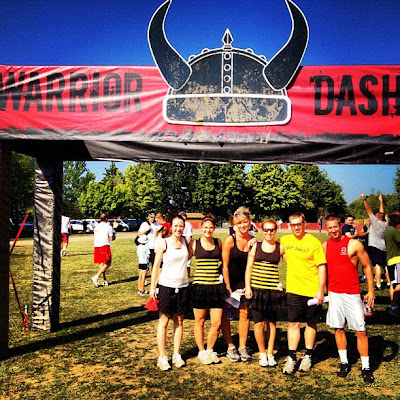 This year's event was clearly far more organized than the Warrior Dash in Carrollton one year prior. It was clear that the company (Red Frog Events) has been finding ways to improve the event and work out the bugs now that it is no longer in its infant stages (Warrior Dash is now in its third year, with 65 events around the world in 2012, totaling over 1 million participants). Everything about the race was smoother than last year: from parking, to signing in, to getting your beer! 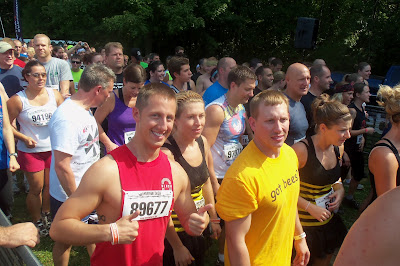 Lining up at 11:30, Curt, Regina and I stretched out, threw some high fives, and went off and running! That is, until the very large group of runners began to bottleneck on the very narrow wooded trails. It was sort of annoying that we couldn't run ahead at full speed. You would think there would be a longer stretch of open trails at the start so that slower runners would taper off. But, we dealt with what we had. In addition to the narrow paths, they were also a bit rugged, with ditches, tree roots, and rocks standing in our way. Those little hiccups in the road were nothing, however, compared to the 13 obstacles that lay ahead:

List of Obstacles
1. Barricade Breakdown: Hurdle over barricades and under barbed wire
2. Rio Run: Dash down the river
3. Capsized Catamaran: Swim, climb, stumble, swim
4. Cliffhanger: Rappel down the steep ravine
5. Deadweight Drifter: Trudge through the waist-deep water and over the logs
6. The Trenches: Stay low and crawl quickly through the dirt and under logs
7. Chaotic Crossover: Climb over the tangled nets
8. Dead Man's Drop
9. Leader's Ledge: Climb on the ledge and avoid falling in the water below
10. Horizontal Hike: Voyage over the arching obstruction
11. Cargo Climb: Maneuver over the cargo nets
12. Warrior Roast: Leap over the warrior fires
13. Muddy Mayhem: Scramble under the barbed wire and through the mud as you near the finish line

The obstacles were most certainly challenging, but honestly paled in comparison to the difficulty of last year's Warrior Dash. Perhaps they were designed a bit lighter, but perhaps also I was in much better shape than I was a year ago. My brother and his wife were impressive in their run as well. Regina was better at the running, while my brother and I were better at the obstacles. We did not stick together the entire time, but ended up meeting up every once and awhile when we came to the obstacles (as you had to wait in line at some of the obstacles).

The Capsized Catamaran and the Deadweight Drifter, both obstacles that involved water, were some of the most challenging due to the depth of the water and how hard it was to pull yourself out of the water without any foot leverage. The Dead Man's Drop and Cargo Climb were a bit scary due to how high up they were (people who were scared of heights would not fare well). My favorite part of the race was the Leader's Ledge obstacle, because it involved a bit of rock climbing skills as well as teamwork with my brother and sister-in-law. 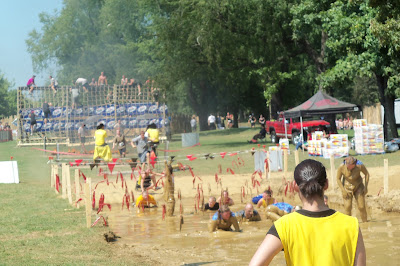 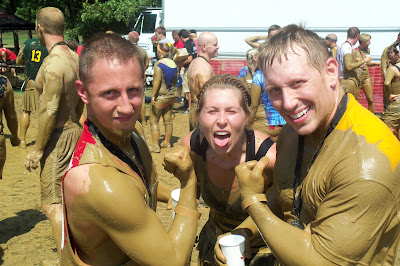 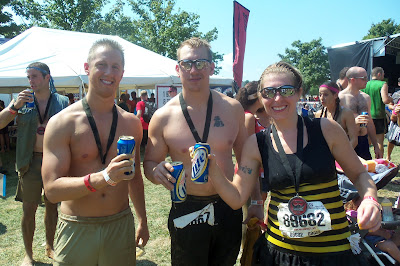 We celebrated our achievement, got hosed off, grabbed our free beers, chomped on a turkey leg, listened to the live music, and enjoyed being amongst hundreds and hundreds of other like-minded WARRIORS and OHventurers from across the state! Til next year!
Posted by Mike at 9:32 PM No comments:

Spend A Day in German Village

With its cobblestone roads, gawk-worthy homes, and beautiful landscaping, German Village is truly one of the most quaint neighborhoods in downtown Columbus. Here are the TOP 10 attractions for you to check out:

1. Schiller Park: This perfect park, located smack dab in the middle of German Village, has a great pond with a bridge where it's common to see people feeding ducks, playing with motorized boats, or having a romantic walk (or just a nice chat with a friend). There's also unique landscaping and lots of statues peppered throughout the park, including a huge one of Mr. Schiller himself. In summer months, an amphitheatre comes alive with theater productions. It's free and kid-friendly!!

2. Schmidt's Sausage Haus Und Restaurant: When visiting German Village, you must eat at Schmidt's Sausage Haus where the food is authentically German, the waitstaff dons German garb, and the restaurant itself is on the national registry of historic places! Schmidt's is known for its Bahama Mama sausage, which I suggest you enjoy as part of the Autobahn Buffet. They are also known for their FAMOUS cream puffs. SAVE ROOM FOR THE CREAM PUFFS!

READ MORE AT DISCOVERING OHIO, THE OFFICIAL BLOG OF THE OHIO DIVISION OF TOURISM 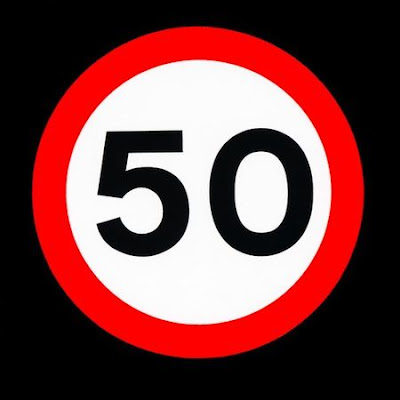 Need an idea of what to do to to spice things up in Ohio? Need to scratch some items off of your Buckeye Bucket List? How about 50 ideas? Here are the Top 10 "Top 5" Lists by OHventures to give you a couple of fun activities to choose from, whether it be sipping on some Ohio wine, riding on world class roller coasters, or dodging paintballs with friends.

10. 5 Ways to Cool Off in Ohio: Boating, Parasailing, Canoeing, Kayaking, and Paddleboating.
Posted by Mike at 10:49 PM No comments: