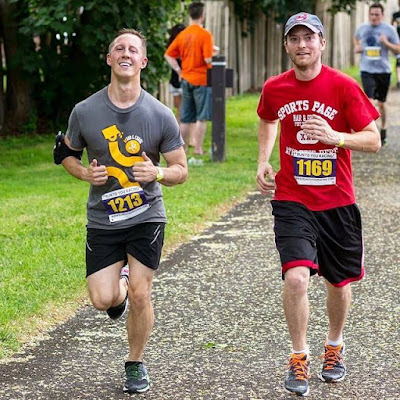 Most all runners love to look back at the end of each year to reflect on their accomplishments and milestones. While I only ran in 10 races this year (as compared to 14 in 2015 and 20 in 2013), many of them were significant in my career: I ran in one of my fastest 5Ks ever (Warren Fit 5K in 23:02) and I ran in my 3rd ever half marathon (the Pro Football Hall Of Fame Half Marathon in Canton). In addition, I did some runs that had a fun element or theme added in unlike any I have done before (such as carrying a pumpkin the entire way in the Great Pumpkin Run and stopping to chug beers in the Ultimate Beer Run).

Discover The Best Ohio Bars To Catch Up With Friends! 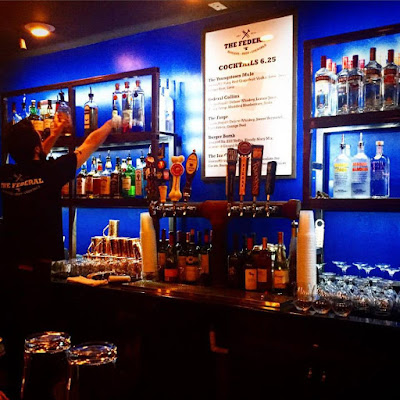 The Federal in Youngstown - Photos by OHventures

Nothing brings people together more than the holiday season. Each year, we look forward to catching up with friends who have come from near and far back to their hometowns. Some of the best places to go to spread the warmth and cheer of the holidays is at your local watering holes.

While bars and pubs can be a dime a dozen in some areas, there are some that stand out above the rest with a certain charm and cool factor. Below are some of those bars that are worth a visit when you're meeting up with old friends and family. 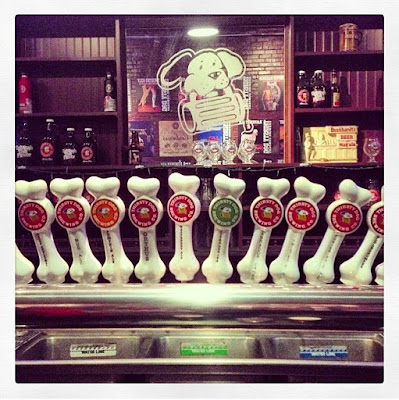 Akron
In Akron, the Thirsty Dog Brewing Company has been concocting tasty beers since 1997. But only recently have they opened their very own Tasting Room, located right on site in the room next to where the stuff is brewed! Found near the University of Akron, this nondescript building lures you in with the aroma of freshly brewed hops. Try the canine-themed beers, such as Whippet Wheat, Irish Setter Red, and of course the 12 Dogs of Christmas!

If beer is not your style, consider heading to Jilly's Music Room on the North Side, where you can get cocktails in a modern and sleek setting while enjoying local live music!


Athens
My pal Jake always shows me some great places when I visit Athens in Southeast Ohio, and one that I will never forget is Tony's Tavern. This is a dive bar where everybody knows your name, and where the house specialty is a shot called the hot nut - made with hot coffee and hazelnut liquor. They are delicious, cheap, and a lot of fun!

Another go-to spot for OU alum and other folks who come back into town is The Pub. Here, they are known for their aquariums of beer and for having the best cheeseburgers in town (according to Jake)! 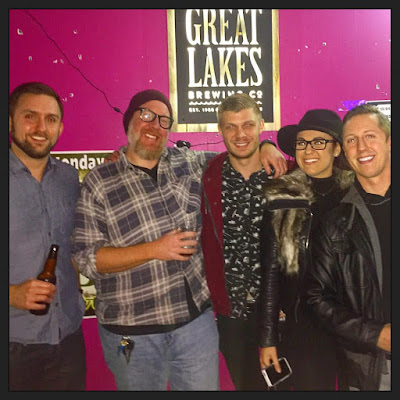 Canton
If downtown Canton is where you are heading for the holidays, then Buzzbin Art & Music Shop is the destination for you. The atmosphere is eclectic and one-of-a-kind, with a counter made entirely of bottle caps, and an adjacent arcade full of vintage pinball machines. The crowd is great for people watching, and you never know what genre of music will be blaring from the stage that night. 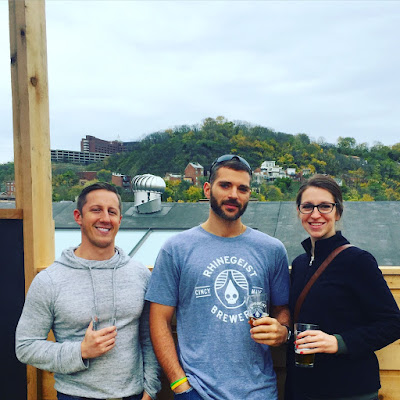 
Cincinnati
Rhinegeist Brewery is a brewery situated in the up-and-coming neighborhood of Over The Rhine in Cincinnati. The wide open interior is available to reserve for private events, or you can come anytime to play cornhole, ping pong, foosball, or watch a ball game - all while relaxing with some locally brewed booze. Take a tour to learn about the history, or enjoy the awesome rooftop bar for a 360-degree view of Cincinnati.

Cleveland
We all know that Cleveland rocks, which you can experience for yourself by going to popular music bars such as Euclid Tavern, an old staple of University Circle, which was recently featured on an episode of "Drunk History."

For something new and different, try Punch Bowl Social, located in the Flats neighborhood. It's a bar that focuses on entertainment and games, including bowling, ping pong, karaoke, board games, foosball, video games, shuffleboard, and more! You can't go wrong competing with friends over drinks and games! 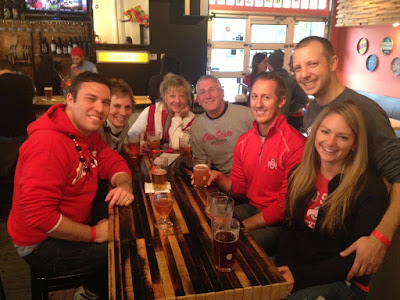 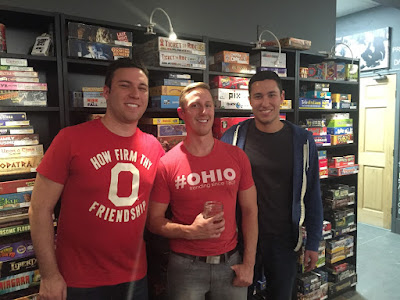 Columbus
It was extremely difficult to choose just one, but my favorite bar in the Short North is Bodega, which is a "hipster" hangout perfect for a small group of close friends. Bodega has been recently renovated and is known for its endless array of draught beers, to-die-for grilled cheese, and a charming crowd of cool kids.

For something really different, you should head down the street from Bodega to Kingmaker's Board Game Parlour. offers over 500 unique board games paired alongside a nice selection of cocktails and beers on draft. Visitors are required to pay a $5 "library fee" that lasts the entire night, and allows them to play any and all of the board games of their choosing. 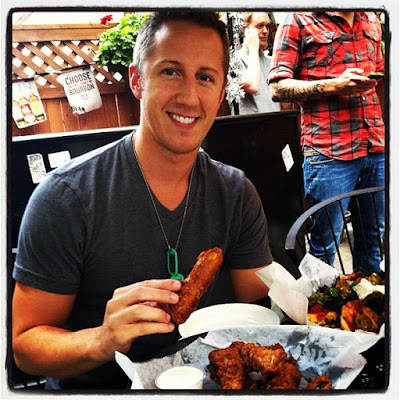 Dayton
The Oregon District is the place to be for nightlife in Dayton. My personal pick is Blind Bob's, a great  mom & pop spot for people in search of a few drinks, good ol' fashioned bar food, some rockin' karaoke, and even "Battle of the Bands" events. Not to mention, the fried pickles are the tastiest I have ever had!

Another fine choice, as told to me by my pal Dan, is The Century Bar, a bourbon and whiskey house. Even if you don't like bourbon, the folks at The Century claim that they can make anyone a bourbon drinker, even those with the most discriminating palate.


Toledo
One of the newest additions to the downtown Toledo scene is also one of the must-visit places. M'Osteria & Bar is situated right between both stadiums, and is a perfect mix of old and new. There's a wraparound bar and open kitchen format downstairs, and a classy lounge area with live entertainment upstairs.

You can never go wrong with heading to the famous Tony Packo's to chow down on chili, and to check out the hot dog bun collection.


Youngstown
For those of you who watch the TV show "Bar Rescue," you might be familiar with The Federal. This recently transformed bar in downtown Youngstown was jam-packed with patrons when I went back home for Thanksgiving - and for good reason! The bar is complete with a dance floor, pool tables, and great drink specials - try the Youngstown Mule, and the Burger Bomb (if you dare).

Right down the block from The Federal is V2 Wine Bar Trattoria, which is definitely worth a visit! 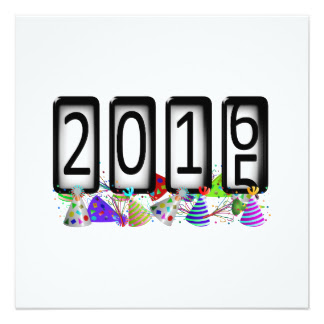 2015 brought the most out-of-state adventures and vacations than any other year in the past. I went to Washington,DC; Detroit; Siesta Key, Florida; Chesapeake Bay, Maryland; Las Vegas, and Chicago, to name a few. However, despite the jet-setting across the country, I still stayed true to my Ohio roots! This year brought some of the most high quality and exciting Ohio adventures to date!

1. VeloSano 100-Mile Bike Ride: This epic fundraising event was held in Cleveland, with over 2,000 cyclists signed up to raise money in the months leading up to their bike rides. I raised over $1,500 for cancer research, rode 100 miles, over 4,000 feet of elevation, in the 90 degree heat, which took about 9 hours!

2. Kalahari Indoor Waterpark & Resort: With the nation's largest indoor waterpark, a candy shop with seemingly endless amounts of treats and desserts, one of the best arcade and gaming areas around, world-class spa treatments, a fitness facility, and a fine selection of adult beverages (including a swim-up bar),Kalahari Resort in Sandusky is anyone's dream come true.

3. Escape To Kelley's Island: Located in Erie County in the western basin of Lake Erie about 4 miles north of the Marblehead peninsula and 10 miles from Sandusky Measuring more than 4 square miles, Kelley's Island is the largest American island located in Lake Erie. Join us as we drink, eat, sightsee, and adventure on the island, and for an added bonus, read about our flight to the island!

4. CryoTherapy Plus: I survived -293 degrees Fahrenheit with Cryotherapy! Cryotherapy is an anti-inflammatory treatment involving skin exposure to ultra-low temperatures for a brief, controlled time, in order to help enhance athletic performance and recovery. It's one of basketball prodigy LeBron James' favorite things to do after games, which was reason enough for us to check out this Akron area full-service cryotherapy spa!

5. Cooking Class at Gervasi Vineyard: Being a frequent flyer at all three of Gervasi Vineyard's amazing restaurants (The Crush House, The Piazza, and The Bistro), and being a budding chef in my own home kitchen, I had been wanting to attend a culinary class at The Cucina for quite some time. I had the chance to be a student this October in the "Great Fall Grilling" class with Chef Meg Feller as my instructor. 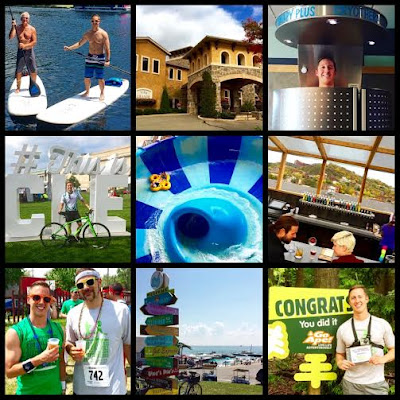 7. Bodhi Tree Guest House & Studio: This Buddhist-inspired getaway can be found off the beaten path, hidden among the trees and on four acres of the Appalachian hillsides of Southeast Ohio. Booking a room earlier this summer allowed for me to retreat from the busyness of life, clear my mind, and treat both my body and soul. I opted for a Thai massage coupled with a 60-minute float in a state-of-the-art float tank!

8. Stand-Up Guys Paddleboarding: In the Akron area, at the Portage Lakes, there is a great company aptly named The Stand Up Guys, who offer paddleboarding rentals along the PLX for very reasonable prices! The Stand Up Guys are totally laid back and willing to work with you on rental times and the location on the lakes in which you will launch from. I was able to convince my dad to try it out for the first time ever as a birthday gift to him, and I dragged my mom along too.

10. Rhinegeist Brewery: Rhinegeist is a brewery situated in the up-and-coming neighborhood of Over The Rhinein Cincinnati (which is located in Hamilton County). Nothing beats the atmosphere at Rhinegeist. The wide open interior is available to reserve for private events, or you can come anytime to play cornhole, ping pong, foosball, or watch a ball game - all while relaxing with some locally brewed booze. Take a tour to learn about the history, or enjoy the awesome rooftop bar for a 360-degree view of Cincinnati. 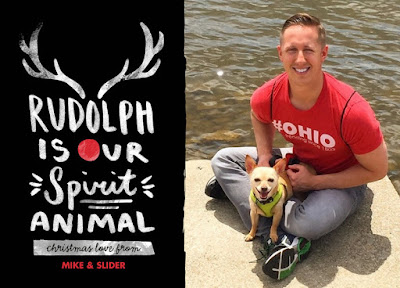 Merry Christmas, Happy Holidays, and Happy New Year to all of my readers of OHventures! Thank you so much for your continued support in my quest to show everyone just how cool Ohio can be! May the next year bring you an endless thirst for adventure! See you in 2016!