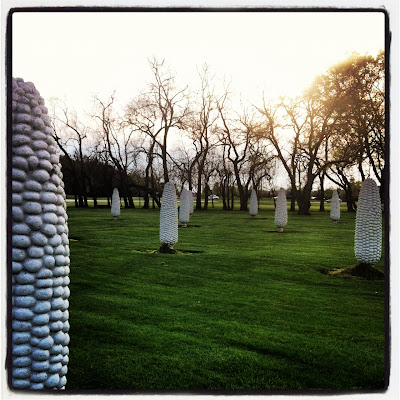 Photo by OHventures
Field of Giant Corn Ears
4995 Rings Road
Dublin, OH 43065
﻿
File this one under "bizarre." A giant field of corn ears made out of concrete can be randomly found in the City of Dublin in northern Franklin County. I had "heard" about this peculiar lawn full of human-sized corn for many years, but only recently made the trek to see it for myself. What I found was that seeing these veggies in person was even more intriguing than I thought it would be!
109 gray, stone corn ears seemingly sprout from the ground, lined neatly in rows. All I could think of was how much of a pain in the ass it would have to be to mow the grass here! I also kept scratching my head trying to figure it all out!
The sculptures were installed in 1994 and were created for the Dublin Arts Council by an artist named Malcom Cochran. It is said that the purpose for the piece is to make a statement about how the area was transitioning from being rural and agricultural to more suburban and industrial. The man who originally owned the land was the inventor of hybridized corn, but now the site is right across the street from a Nationwide Insurance building. More history about the area can be read about on plaques throughout the "park."
The shucked cement corn is definitely worth a visit as it can serve as a great conversation piece and something you can do "just to say you did." It's also a really funny photo op, which goes without being said. It serves as a great reminder of the rich farming and agricultural history of Dublin and a very humorous sight all in one!
﻿ 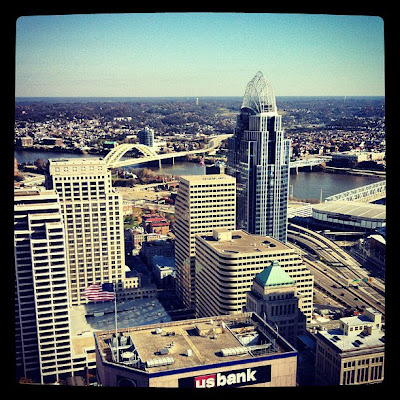 On a recent business trip to Southwest Ohio, I decided to make a pitstop in downtown Cincinnati to have lunch with friends and sightsee a bit before heading back home to Columbus. I had limited time, so I asked my friend Sam to help me find the best tourist attractions that I could hit up during my stay. After a quick lunch at Rock Bottom Brewery (which had the best pumpkin ale I've ever had)located downtown at Fountain Square, Sam and his buddies Katie and Todd whisked me away to what is known as Carew Tower.

Carew Tower is 49 stories and 574 feet tall, making it the second tallest building in all of Cincinnati. For a small $2 fee, you can head up a series of elevators to the observation deck on the roof! Here, you will get the most spectacular view of the Queen City possible! On a clear day (like the beautiful November day I visited) you can see miles and miles in every direction. You can even see across the Brent Spence Bridge over the Ohio River into Covington, Kentucky. You get spectacular glimpses at everything from the University of Cincinnati to Paul Brown Stadium (home of the Cincinnati Bengals) to every other skyscraper in the city. You can also see into Indiana! 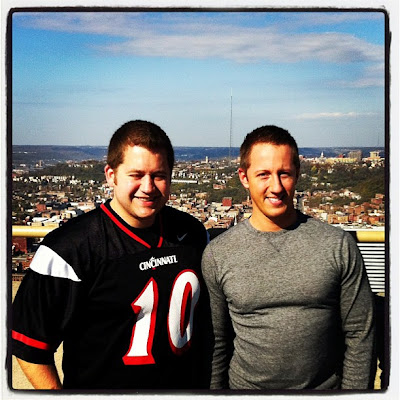 Designated as a National Historic Landmark in 1994, Carew Tower is filled with French art deco styles that encapsulate the spirit of the era it was built (1927 to 1931). While visiting the lower levels of the building, one can find a shopping mall and a very fancy bar (where we grabbed a drink, gawked at the beautiful murals and architecture, and did some people watching)! The rest of the building consists mainly of commercial office space, as well as a Hilton hotel.
Interestingly, Todd (who was full of vast knowledge) informed me that the tower served as a model for New York City's Empire State Building! While on the rooftop, Todd also pointed out all of the businesses and landmarks surrounding the city, and mentioned that Cincinnati has more Fortune 500 companies per capita than any other city in the nation (including Procter & Gamble, Kroger, AK Steel, and more). 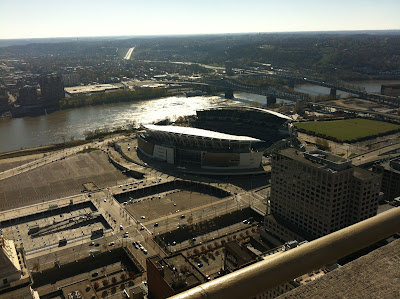 Standing atop this enormous building allowed for me to see the most of Cincinnati in the shortest amount of time. If you ever have an hour to spare while driving through, just park at the Fountain Square parking lot and make your way to the top of Carew Tower. It's also a great spot to go to plan ahead a day trip to Cincy, so you can map out your gameplan from a bird's eye view (literally). ﻿
Posted by Mike at 11:34 PM No comments: 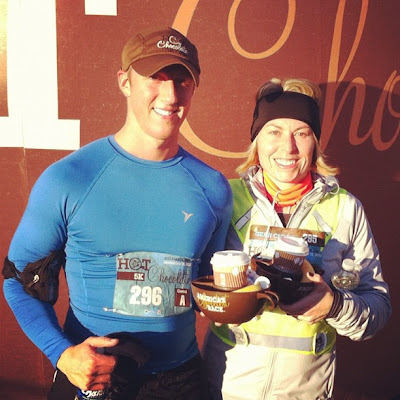 Photo by OHventures
Dubbed "America's Sweetest Race," the Hot Chocolate 15K/5K has made its way across the country with the promise of a cup of steamy Ghiradelli hot chocolate at the finish line to warm up runners who braved the cold for an early morning jog. The event has attracted thousands upon thousands of sweet-toothed athletes eager to get their hands on a cup of cocoa in cities like Atlanta, Chicago, Dallas, San Diego, Phoenix, and Ohio's very own pride and joy, Columbus!
In addition to the obvious hot chocolate handed out to those who complete the run, participants also receive a lot more swag such as a finisher's mug, chocolate fondue with dippables, and even a fitted technical jacket (as opposed to most other races that hand out t-shirts)! These enticing goodies were more than enough to convince my sister-in-law (Regina) to drive three hours with her family to stay with me in Columbus so her and I could run the 5K! While the $45 entry fee seemed steep, we knew that in addition to getting a lot of fun stuff, we also would be contributing to the Ronald McDonald House Charities, whose goal is to help sick children in need. It was an all around win/win to sign up! 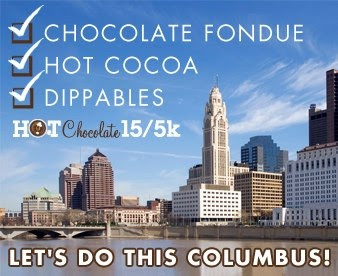 The Hot Chocolate 5K took place on Sunday, November 18 in downtown Columbus. It began at 7:30 AM - earlier than any run I had ever participated in. The start and finish line took place at the one and only Columbus Commons, which has become a staple for events such as this (this is the same place where the Capital City Half Marathon and the Bike Columbus Festival had their finish lines). Much to my sister-in-law's surprise, getting to the event was a piece of cake. She was not used to running in such a large race and was impressed with how organized it was despite having approximately 10,000 runners (and even more spectators) there that day. 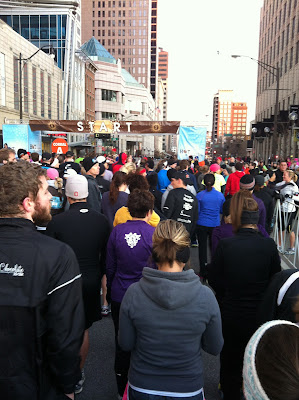 Regina and I were thankfully both in Corral A, which was closest to the start line. This is where the serious 5K-er's could be found, and it meant we wouldn't be forced to have a slow start by running (or practically walking) behind those who had a much slower pace than us. The route headed north on High Street, past the Statehouse into the Short North. It then headed west on Poplar and back south on Park Street (which turned into Civic Center). We ran alongside the Scioto River when getting back downtown, and eventually circled back to Columbus Commons by heading east on Mound Street and north on 3rd Street.
My run went surprisingly well! I was a bit skeptical of my time, since it was so early in the morning, so chilly out, and because I had been out with friends the night before (hey, I gotta be honest!). I clocked in with a time of 25:54. Not far behind was Regina, who had a time of 26:54. We were both incredibly pleased and impressed with our results and felt absolutely fantastic! It was the first race since my half marathon in which my knee gave me zero problems! While our times could have been even better, we chalk it up to a pretty tough course with a large hill near the 3 mile mark! I came in 319th overall, or 22nd in my age group for men (out of 118) and Regina came in 474th overall, or 30th in her age group for women (out of 580). 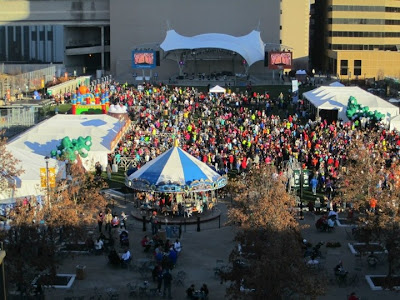 It had warmed up quite a bit since the brisk 36 degrees at the start of the race. It was more like 50 degrees when we finished, and we were of course sweaty in our layers of dry fit gear! Since we finished so quickly, there was no line whatsoever for us to get our finisher's mug with chocolate fondue and dippers (which included pretzels, a banana, marshmallows, wafers, etc.). There were inflatable marshmallow men and mugs of cocoa all around the park as more and more people trickled in from the finish line. On stage was a rather interesting choice of entertainment. I am just not so sure that a band that covers rap songs from Nelly and Eminem is really fitting for such an event, especially at 8:00 AM. But it made for a good laugh! 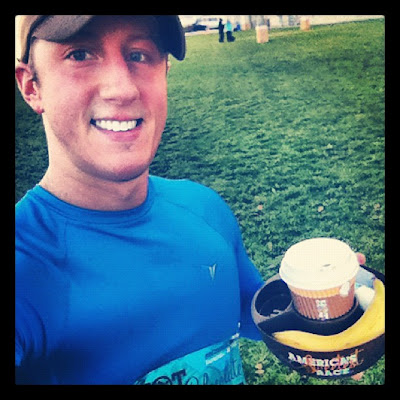 We gobbled up our grub and made it out of there by 9:00! We truly enjoyed the race (we were lucky to have such fantastic weather) and everything that came with it: the chocolate, the charity, and the camaraderie. If you want to join in on the fun, this extremely popular race already has 2013 dates on the calendar for other cities outside of Ohio. It's likely Columbus' 2013 Hot Chocolate 5K will be announced soon, and perhaps other locations in the state?
Posted by Mike at 10:58 PM No comments: