Amusement park enthusiasts from around the world flock every year to Cedar Point, located in Sandusky, Erie County, Ohio. We are lucky to have one of the best amusement parks on the planet right on the Lake Erie coastline. With more rides than any other park on earth (71), and the second most roller coasters (16), Cedar Point has been breaking records and drawing in millions for decades. 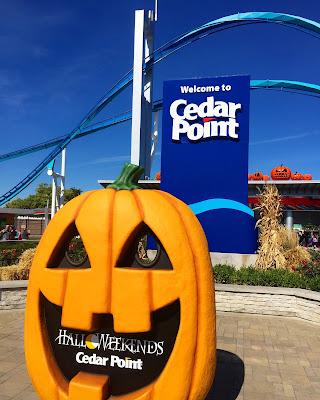 For the past 20 years, Cedar Point has been hosting HalloWeekends, on the weekends that fall between Labor Day and Halloween. The entire 365-acre park transforms into a spookier, scarier, and more thrilling experience for guests, with pumpkins and cobwebs decorating the queue lines, and ghosts, goblins, and ghouls roaming the midway. 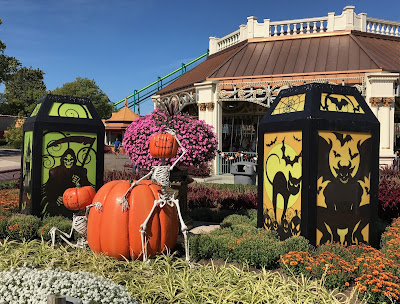 This past weekend, I experienced HalloWeekends for the very first time. I had been to Cedar Point many times since my youth, but never during HalloWeekends. During this time, the park is only open Friday through Saturday, and with limited hours. After spending a Sunday in the park in late September, I have to say it was one of the best visits I have ever had to Cedar Point!

This is mainly because the crowds are significantly smaller than during the summer months. I do, however, hear that Saturdays during HalloWeekends can bring in very large numbers of park goers (especially in late October). So, if you plan to go, make it on a Sunday! We arrived just before noon (the park opened at 11AM) and left around 7 PM (the park closed at 8 PM). 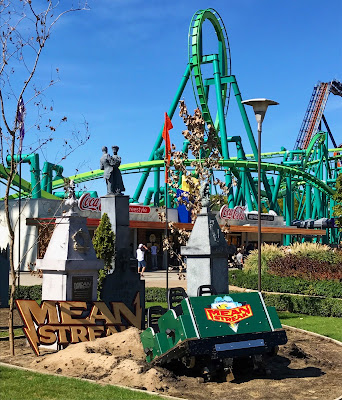 The park was truly transformed, with special Halloween touches everywhere you looked. I loved the attention to detail: skulls, bats, and skeletons strategically placed throughout the park. I particularly enjoyed the specially created displays, such as the "Dead Ride Cemetery," featuring "tombstones" of former coasters and attractions that are now defunct and have since been torn down. Pictured above, you can see part of the cemetery (which is found in the Midway near the Raptor roller coaster), including the grave site of the Mean Streak, the giant wooden coaster that is being torn down this year.

Further down the Midway is a giant jack-lantern to walk through (perfect for a photo op), a giant mechanical ogre, and the "Cemetery of Dead Rockers." This area is found near the Corkscrew roller coaster (pictured below), and features headstones of rock-and-roll legends who are no longer with us: Rick James, John Lennon, Elvis, and even Amy Winehouse. 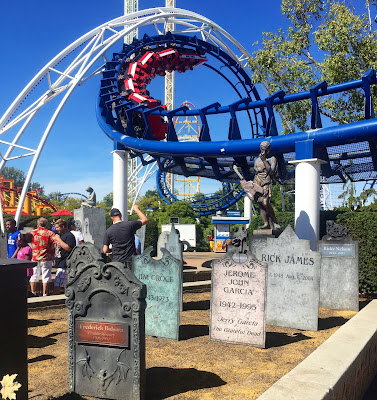 Even further down the Midway is the Great Pumpkin Spectacular, where you can find 10,000 hand-carved jack-o-lanterns lining the walkways. They are true works of art, and look even cooler at nighttime, all lit up. This is a new addition to HalloWeekends this year, and can be found near the Top Thrill Dragster and the Power Tower.

This entire stretch of the Midway is where you can witness the Great Pumpkin Parade at 4 PM each day. And if you have kids, there are a ton of places nearby that can offer age-appropriate Halloween fun (like trick-or-treat zones and Peanuts characters dressed in a not-so-spooky manner). 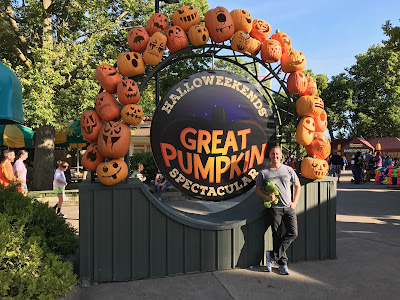 We, of course were not there with children in tow. This meant that not only could we hit up all of the haunted houses we wanted, but we could also indulge in some adult beverages. Do yourself a favor and try the craft beers especially made for Cedar Point. This includes the RougaBrew and the Valravn Red Stout, both named after newer rides at the park, and both available for a very limited time. You can try them at the Trail Tavern near Millennium Force roller coaster (yes, the one that is over 300 feet tall). 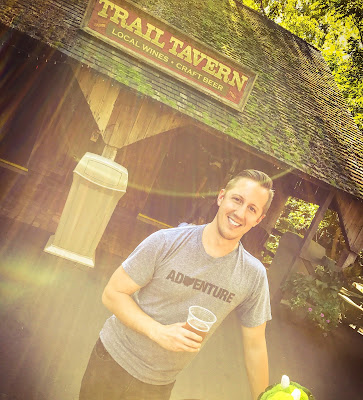 Enjoying a RougaBrew at Trail Tavern

Another great spot for some cold ones is Chickie's & Pete's, found near the entrance and right next to the Blue Streak roller coaster. A word of caution, however: plan to ride the more intense rides before you eat heavy foods and guzzle on some beer. We did things a bit backwards, eating some famous crab fries (seasoned to perfection) at Chickie's & Pete's, then riding the aforementioned Blue Streak - the oldest (1964) and most rickety roller coaster in the park (hey - it had no line, so we had to try it). 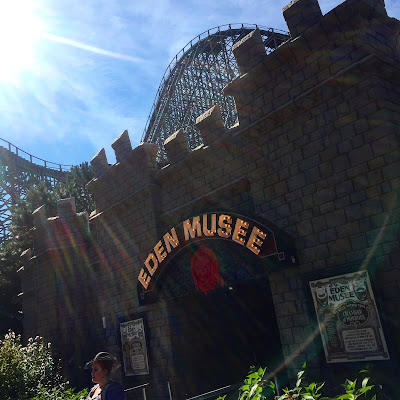 Now it was time for the scary stuff. There are so many haunted houses in the park, but we could only make it to a couple (no thanks to the long line we waited in to ride the Maverick roller coaster). The two we were able to experience were: the Eden Musee (a wax museum themed haunted house full of surprises), and Hexed (a witch themed haunted house with a ton of great scares). 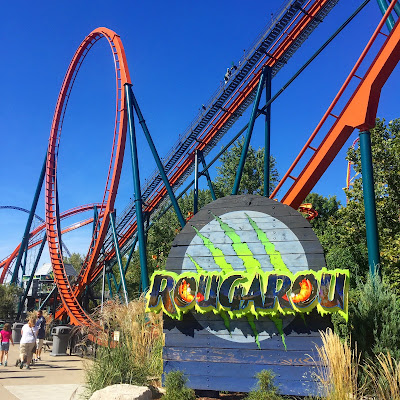 While we really did want to try some of the other featured haunted houses (like the Zombie High School and the haunted hospital aptly called Eternity Infirmary), the real scary thing would be if we didn't get to ride some of the newest roller coasters at the park. This includes Rougarou (a floorless coaster, formerly known as Mantis when it was a stand-up roller coaster...it's complicated). Being that this is named after a werewolf creature from French folklore, we felt it was appropriate to ride on HalloWeekends. 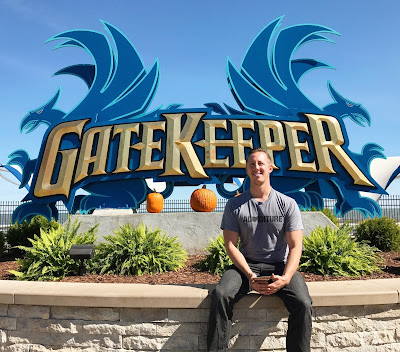 It would also be a sin if we skipped GateKeeper, a wing roller coaster with the largest inversion on earth (built in 2013) and frightening keyhole elements. And, most of all we HAD to ride Valravn, the longest, fastest, and tallest dive roller coaster in the world, which was just installed at the beginning of the 2016 season. Aside from Maverick, this was the longest line we stood in (and even so, it was only a half an hour), but it was definitely worth the wait. 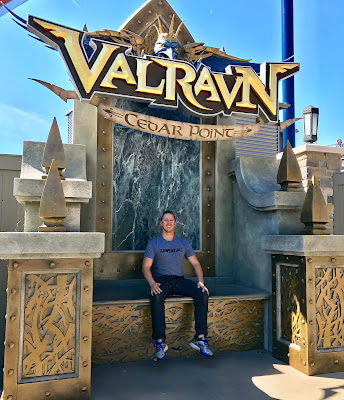 Overall, the trip to Cedar Point for HalloWeekends was nothing short of perfect. The crisp fall weather was gorgeous - not too hot, and not too cold. And, the lines for most rides were 15 minutes or less (even the GateKeeper was only about 10 minutes). You still have time to check out HalloWeekends in 2016!
Posted by Mike at 11:55 PM No comments: 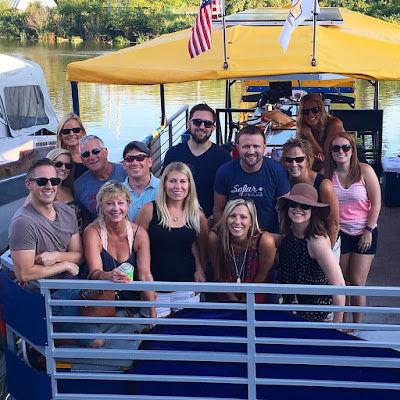 Part bike, part boat, and part bar, the BrewBoat in Cleveland is a one-of-a-kind experience that will guarantee to be a hit for you and your adventure-and-beer-loving friends.When trying to find a perfect birthday gift for some family members who "have it all," I decided to get creative and book a reservation aboard the BrewBoat! 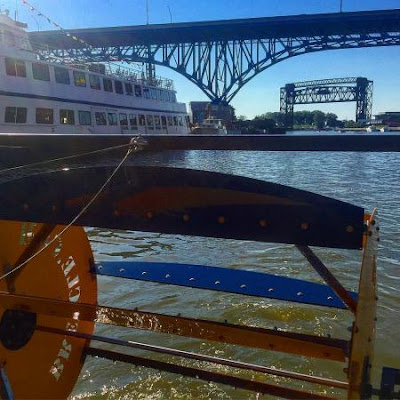 This is Ohio's first and only pedal-powered paddle-wheel party boat, which launched Memorial Day weekend of this year. The boat is 31-feet long with 10 seats for pedalers and four additional seats for passengers who opt to not pedal (we took turns, so no one felt left out). Yes, the boat is human-powered, which means you get a bit of a workout mixed in while you drink. It's like the Pedal Wagons of Columbus and Cincinnati, but on water instead of on the streets! 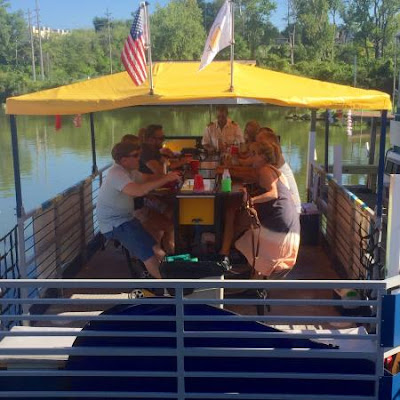 I reserved 10 seats for our 2-hour cruise this August (the other 4 were already booked, so we would be on board with a few new friends). Each ticket was $35 plus tax, and the trip required you to BYOB. When you arrive at the launch site, located on Whiskey Island in the heart of Cleveland, you are able to purchase cold brews at the convenience store found at the dock.

Most of us brought our own favorite beers from home (each person is permitted to bring no more than 36 oz. or beer, or 18 oz. of wine for themselves). There are convenience coolers of ice located right in the middle of the bar, so you can keep your drinks chilled and readily available during your excursion (no need to bring your own coolers). 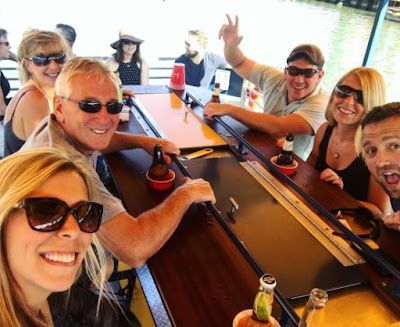 Our group consisted of myself, my brother and his wife, my parents, my aunt, and my friends Zac, Kyla, Ben, and Emily. As mentioned, we were joined by 4 other folks who booked at the same time as us. Also on board was the Captain (Katie), and a driver, both of whom were extremely fun and personable. 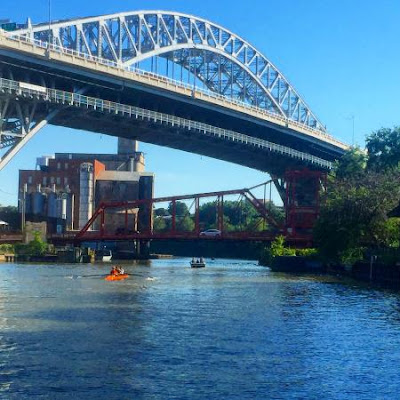 We disembarked from the marina at 5 PM and pedaled down the Cuyagoga River. As we pedaled, we were able to gawk at the gorgeous Cleveland skyline against the bright blue skies, and take in the sights of the revitalized riverfronts of the Cleveland Flats. We floated by notable hot spots, such as the Nautica Pavilion, the Music Box Supper Club, Alley Cat Oyster Bar, and more. We shared the waterway with kayakers, jet skiiers, paddle boarders,, and other seafaring folks out enjoying the fantastic weather and exciting scenery. There was so much to see and to soak in on our cruise! 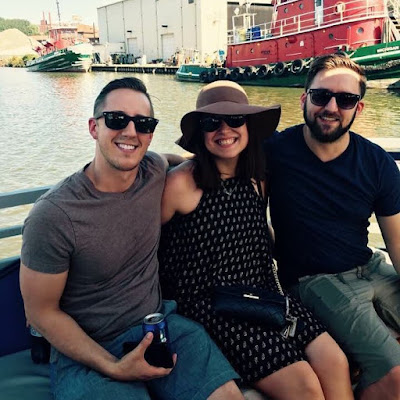 At one point, the driver challenged us to try and work together to pedal as fast as we could in order to beat the record speed. After pedaling and pedaling, we ultimately did not come close to setting a new record, but we had a blast trying! It was also a blast plugging our iPods in and choosing the music we listened to along the way. It was a nice added feature. One downside, however, is that there is no bathroom on board the boat (which doesn't take long to figure out). So, it is a good thing that the ride is not much longer than 2 hours, and that we had a cap on how many drinks we could bring with us. 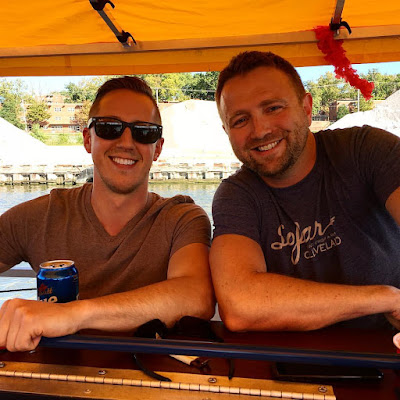 Food is also allowed on board (anything from snacks to pizzas to cold cuts!), however, we were planning to eat dinner at one of the restaurants in the Flats after the ride, so we did not have any food on board with us. 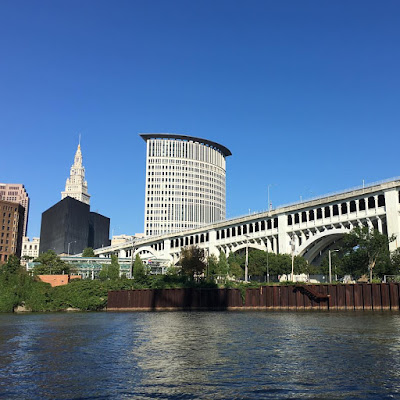 All in all, our experience on the BrewBoat CLE was extremely positive. We are glad to have had the chance to book a ride, since slots fill up fast! The season ends on October 1, but they are already taking reservations for 2017. Captain Katie told me that while they currently have just one boat, it is their hope to soon have more boats in order to meet the demands of the public. Until then, make sure to make a reservation far in advance to ensure you get the time you want. The BrewBoat is perfect for bachelor or bachelorette parties, birthday celebrations (like ours), or just an excuse to get together and enjoy the beauty of the Cuyahoga River and downtown Cleveland in a fresh, new way!
Posted by Mike at 5:50 PM No comments: