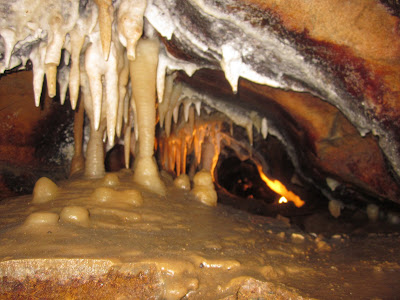 Photos by OHventures
Caving (or spelunking) is a pretty intense activity that requires a lot of experience, knowledge, equipment, and guts. Thankfully, there are such things as "commercial" or "show" caves in the world, including Ohio, that allow us everyday folk the opportunity to catch a small glimpse of the majestic underground world that we so rarely get to experience. Down there, it's a world of beautiful crystals and unbelievable rock formations.


The Ohio Caverns, located in West Liberty in Champaign County in Southwest Ohio is the largest of Ohio's caves (the largest geode in the world, however, is located in the Crystal Cave of Put In Bay). For a charge of $14 per adult (which I admit is a bit steep...but a good splurge to make), you are able to take a tour of this wonderous show cave almost any day of the year (they are closed only on Christmas and Thanksgiving). Tours are typically every 20 minutes or so, so reservations are not usually required. Depending on the size of your group, the tour will on average last about 45 minutes, spanning a mile of pathways.

The Ohio Caverns is certainly a sight to see! The caves have been owned and operated by the same family since 1925 (and was discovered a few decades prior). However, the caves have existed for an estimated 250,000 years, and were formed by glaciers that came through and essentially cut through the rocks (that's the basic, non scientific explanation). After its discovery, mud from the cave was carefully dug out and it was then opened for tours!
Cement walkways and stairs were added, as well as lighting fixtures; the rest of the cave is completely natural. This means taller folks will be required to duck their heads during certain portions of the tour! Those visiting the caves are also asked to not touch anything while underground. This is because the oils on human hands do a great deal of damange and discoloration to the beautiful white crystals, and because many of the crystals and rocks are very fragile and can not afford to be broken! Thankfully, the tour guides will give you a "sample crystal" to touch at the beginning of the tour to get your curiosity out of the way.
Another fun fact about the Ohio Caverns is that the temperature in the caves is constantly 54 degrees, giving you a great place to cool off in the summer and a nice comfortably warm place in the winter months. At one point during the tour, the guide will flip a switch that will turn off all lights in the cave, leaving you with how it is naturally - completely and literally pitch dark (so much so that you can not even see your own hand in front of your face). 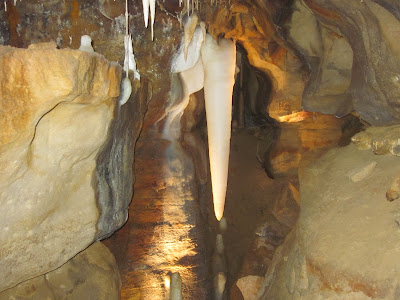 The King Crystal Stalctite, weighing over 400 pounds
You will learn a lot while visiting the Ohio Caverns, such as the difference between stalactites and stalagmites (and seeing the "King Stalactite" weighing over 400 pounds), the different mineral compositions that create the various crystals within the cave, and other geological nuggets of knowledge. And even though there are not usually any animals that live in the caves, you might encounter a bat or two as they hibernate (don't worry, they won't hurt you). It's fun to see how nature creates awesome works of art up close and personal. This is a landmark everyone should experience!
Posted by Mike at 3:29 PM