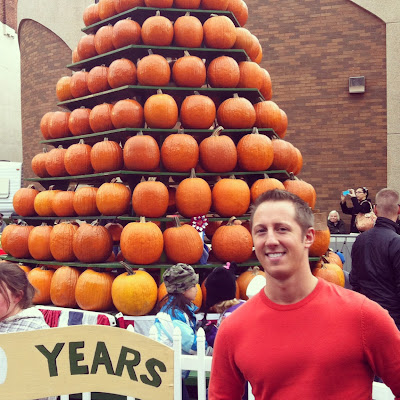 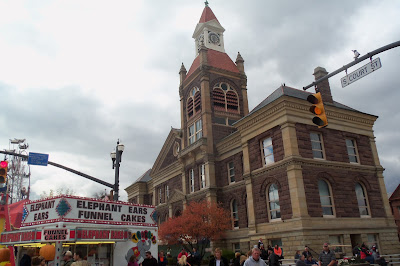 For 106 years, the Circleville Pumpkin Show, located in Pickaway County, is where families have gone to make memories! It is one of the most highly anticipated festivals in the state and the biggest festival in the United States dedicated soley to pumpkins! I first became aware of this gourd-tastic event when my college roommate and his family  performed in a band each year on the main stage, ranting and raving for the weeks leading up to the fair.
In addition to live entertainment, there is much fun to be had at the annual show, which takes place over a four day period each October (this year, the fair ran from October 17-20). The Great Pumpkin Weigh-In draws a great deal of excitement, as it finds out who has grown the largest pumpkin in the state that year (these puppies are HUGE, weighing close to 1,500 pounds!). Below, I am pictured sitting next to this year's award winning pumpkins! If that isn't enough squash for you, everything imaginable is made out of pumpkin: pies (over 20,000 to be exact), cookies, dips, salsas, - you name it! 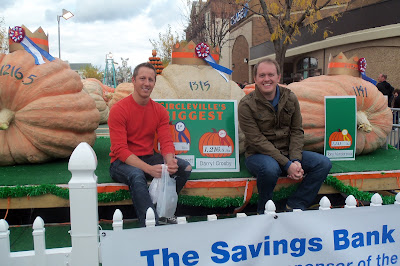 Being the adventurous type that I am, I decided to go for the craziest pumpkin treats I could find! I gorged on the gourds in some very peculiar forms: pumpkin sloppy joes, pumpkin pizza (pictured below), and deep fried pumpkin pie. I washed it down with a pumpkin coffee and a pumpkin soda (also pictured below). Trying all of these pumpkin infused concoctions was definitely the highlight of the visit for me. I even took home some pumpkin butter, pumpkin brittle, and pumpkin cookies! If I keep all of this up, I may end up turning as orange as an Oompa Loompa! Or, worse yet, Snooki! 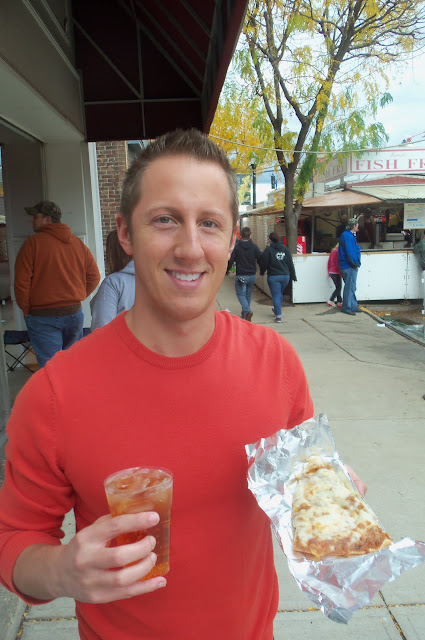 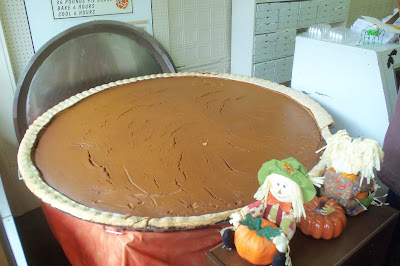 Other than eating, attendees have a lot more to explore up and down the 12 streets blocked off in downtown Circleville. The Miss (and Little Miss) Pumpkin Show Queen is crowned in a yearly pageant, a tradition that dates as far back as 1933. There are also rides (such as the giant ferris wheel), crafts, and shops full of knick knacks galore for sale. One other staple of the show is that there are seven - yes, SEVEN - parades over the course of the four days!

If you can bear the traffic jams leading into Circleville, and the mayhem involved with finding a parking spot, then you should most definitely make it to the Circleville Pumpkin Show to see what all the hype is all about firsthand!
﻿ 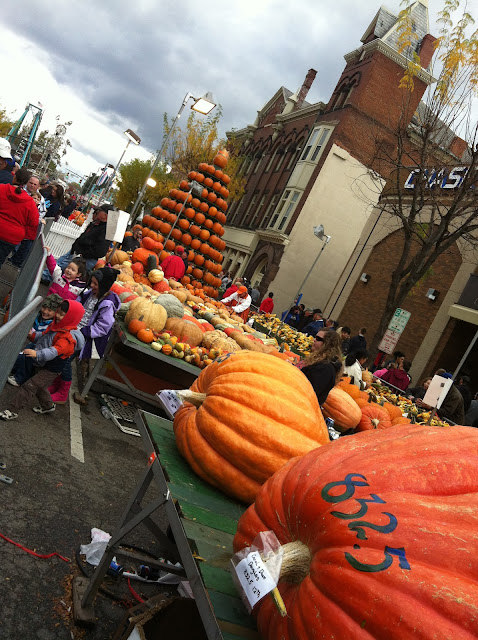