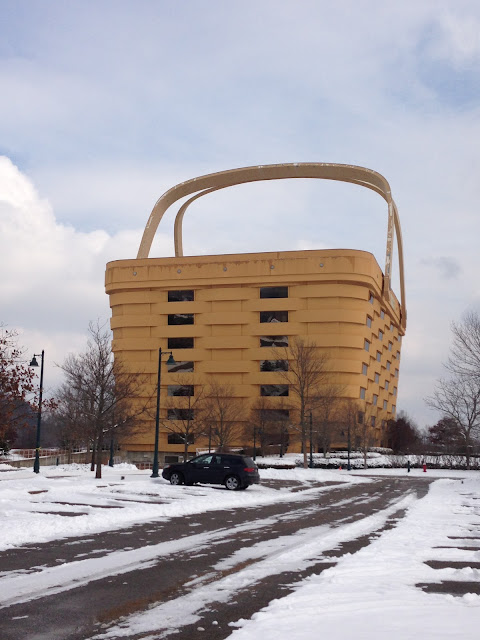 By a landslide, the Longaberger Basket Headquarters in Newark, Licking County is the absolute coolest building in Ohio. And by coolest, I also mean weirdest!

If the Longaberger Basket Company hadn't made a name for itself as one of the most successful basket producing companies in the world, it sealed the deal in 1997 with the construction of its new home office building!

The building is regarded as the "World's Largest Basket," but is more than just aesthetics. Every day, 500 employees work in the ornate structure, which soars seven stories high and weighs a total of 9,000 tons (150 tons of which are the "handles," which are heated to prevent ice from forming). The novelty architecture sits on 25 acres of land and consists of 180,000 square feet of office space (30,000 square feet of which is dedicated to the massive skylight atrium).

The founder of the company, the late Dave Longaberger, dreamt up this peculiar concept, investing $30 million into its construction. Legend has it that most everyone was skeptical of the idea, but being the visionary he was, he forged ahead anyway. Since then, the building has received a number of construction awards and of course a great deal of fame and notoriety (it was one of Time Magazine's 50 Best Roadside Attractions among many other publications).

I happened upon the Longaberger Basket Building by chance, as I was driving along State Route 16 on my way to a winter hike. The building can be seen for literally miles away, and draws you in like moths to a light! You simply HAVE to stop and snap a picture (at the very least). There are also tours available by calling 740-322-5588!