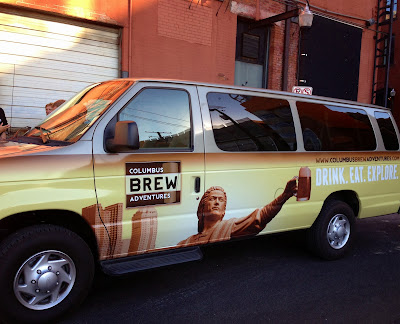 It's safe to say that for most of us, our ears will perk up at the mention of the word "beer." I mean, what goes better with watching the Browns or Bengals play on a crisp autumn afternoon than a bottle of bubbly booze? Or what allows you unwind after an exhausting hike through Ohio's fall foliage than a pint of pilsner? I think you know where I am getting at - beer and adventures go perfectly together. And not just in the fall, but all year long. So rather than go on an adventure and then have a brew, why not combine two and go on a Brew Adventure?!

With Columbus Brew Adventures introduced to us this September, now you can. Bethia Woolf, the same person who brought you Columbus Food Adventures (where we embarked on a Taco Truck Tour last year), has teamed up with Jim Ellison to bring us all another exciting way to treat yourself! With Columbus Brew Adventures, you can leave your worries behind when it comes to getting a designated driver! That's because as part of your tour you are driven around in a conversion van from brewery to brewery, and you can even have a cab called for you at the end of the evening if you are a little too loose to get behind the wheel.

At a cost of just $55-$65 per person, not only do you have the luxury of a completely mapped out bar hop, you also get generous samples of some of the best beers in all of Columbus (and Ohio) while learning fun facts and the stories behind the breweries and the brews themselves, from both Jim & Bethia, as well as the staff and owners of the places you visit on the tour! Because the tours are limited in size (you can only fit so many rowdy adults in the back of a conversion van), you must pre-order your tickets on the Columbus Brew Adventures official website. The tours fill up fast, so it's best to plan ahead, especially if you have a large group! 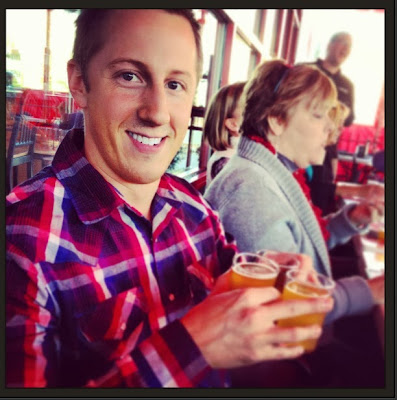 There are currently seven different tours offered, which all vary in theme, usually according to geography. The current tours available are: The Grandview Brewery Tour, The Downtown Brewery Tour, Pitchers & Pizza Tour, Meet The Brewers Tour, Southeast Ohio (Athens) Brewery Tour, Granville & Buckeye Lake Brewery Tour, and the Columbus Distilleries Tour (this one deviates from the beer theme and turns it up a notch with locally brewed liquors from Watershed Distillery and Middle West Spirits!).

I had the privilege of being invited to join Jim Ellison on a Downtown Brewery Tour on Saturday, November 9. Without hesitation, I carved time out of my schedule (twist my arm, why don't you?) and happily made my way to the meeting location for the start of the tour: Columbus Brewing Company (CBC). This would be the first of four stops we would make that day. The tour would start at 2;30 PM and last about 3.5 hours or so. 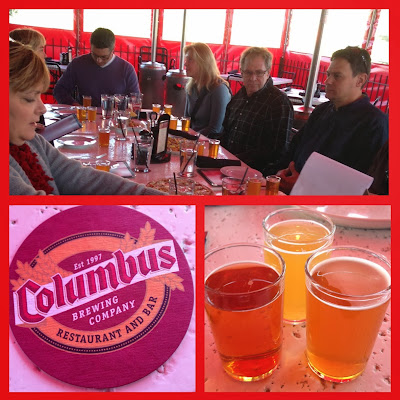 The CBC was a great spot to start, since it is located in what is known as the "Brewery District" of Columbus (in the south central portion of the city. It's located near German Village not by coincidence, but because most of the beers were/are German). Ironically, CBC is currently the one and only brewery still located in the Brewery District (at its height, the Brewery District was home to 5 breweries in the late 1800s and early 1900s, before prohibition). All of these little tidbits of info were factoids that I learned while on the Brew Tour, from our server at CBC, Jamie. 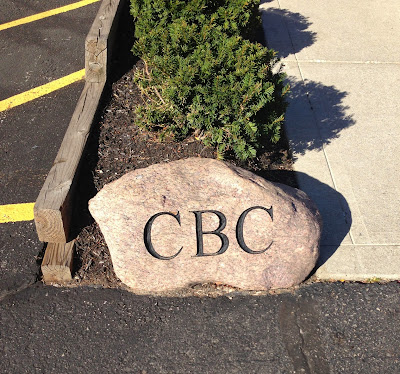 Seated around a large rectangular table in a private section of the restaurant/bar, Jamie served us up a bounty of food to start us off - it would be dangerous to start the tour on an empty stomach! We had calamari, flatbread pizza, chicken wings, and a gargantuan pile of loaded nachos she referred to as "Nacho Jenga." We were told that CBC attempts to incorporate beer in its food as much as possible, as evidenced by their beer cheese soup and pub nachos. 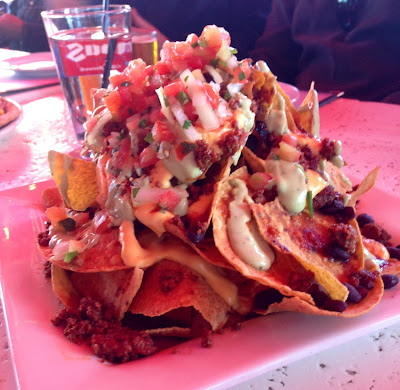 After we were adequately fed, Jamie served us three very different and very flavorful beer samples made at CBC. While I was impressed by all of the beers at CBC, the one that stood out from the crowd was the Bodhi, a double IPA that has been voted best in all of Ohio by Aleheads.com! With 8.5 percent alcohol, it has a sweet finish that had me begging for more! Alas, we had to make room for the beers at the rest of the breweries on the tour (you can read more about Columbus Brewing Company on my Yelp Review)!


I boarded the van with all of my new friends on the tour (mainly all older folks in their 40s and 50s) and Jim drove us to our next stop, Barley's Brewing Company, located on High Street in The Short North. I had only been here a couple times before while in college for fraternity functions, so I was probably drinking dirt-cheap beer like Natty Light when I came here. I was excited to have the real deal this time around! 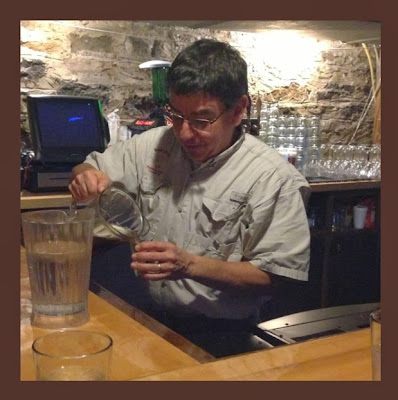 At Barley's, a gentleman by the name of Angelo Signorino served us our beer samples. Angelo has the distinction of being the longest serving brewer in Columbus AND in all of Ohio!! That means, he knew his stuff. Angelo presented a great deal of history behind each of Barley's signature beers. The standouts from here included the Blood Thirst Wheat (with a lovely citrus taste), and the seasonal Christmas Ale, which was made from local cinnamon and honey from North Market Spices! Move over, Great Lakes Brewing Company, your Christmas Ale has some competition! 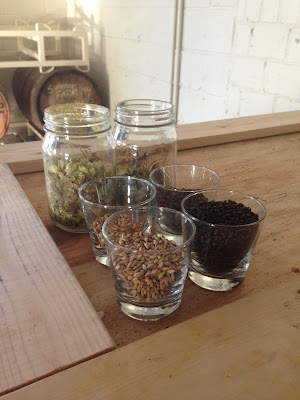 Third on the tour was Seventh Son Brewing, found in the outskirts of Italian Village. Here, we had a bit of a different experience, as a young man by the name of Max took us on a crash course of the science of brewing. He passed around glasses of hops (both in pellet form and their flowering leafy form), and glasses of barley (toasted and un-toasted) for us to sniff, feel, and even taste if we wanted! It was great to hear all of the behind-the-scenes secrets of beer making, but our group was THIRSTY! Thankfully, Seventh Son Brewing delivered with its MASSIVE beer samples that were more like full 12-ouncers! My favorite of this bunch was the crisp Summer Farmhouse ale. 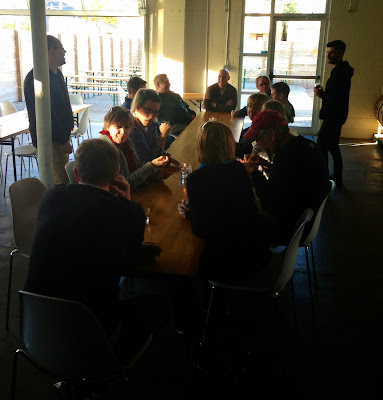 Last but certainly not least was our visit back to the Short North to imbibe at North High Brewing. This brewery is brand spanking new! Its owner, Gavin, heartily introduced himself to our group, and did his best to shout over the growing crowd that gathered within the small space. Gavin told us about the recent renovations to build the brewery, and explained every intricacy found within the bar - from the stools, to the window sills, to the table tops. All of the parts and pieces of the bar have a cool background story that is half the fun of visiting North High Brewing. The star of the show (aside from Gavin and his mustache) was the rich, dark milk stout that reminded me a lot of coffee. It was mighty tasty.

Not only can you go to North High Brewing to drink, but you can also make your very own beer on site! We caught a glimpse of people doing so when we walked in the back room where everything was being prepared! It was a sight to see indeed!

At the end of the tour, the night was still young, but we all had more than enough beer to last us the rest of the weekend. While my memory does get a little foggy near the end of the tour, it is still an OHventure I will not soon forget, and one you MUST embark on yourself! Hurry and sign up now while seats are open!