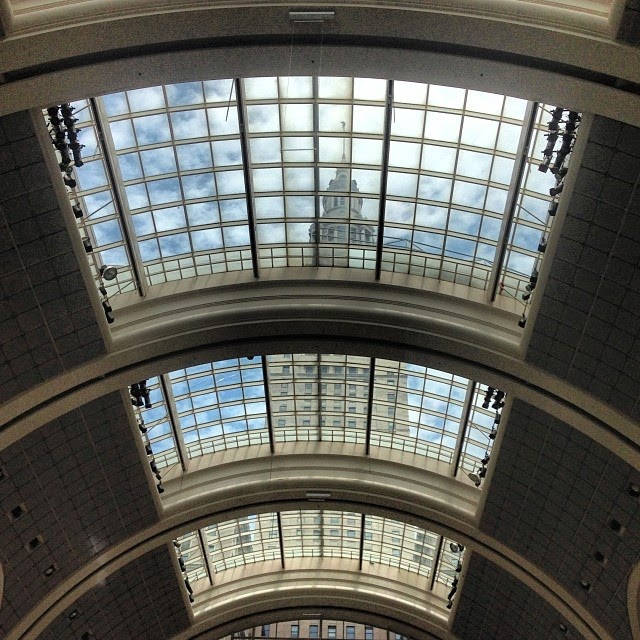 On a recent day trip to Cleveland, I met up with a friend and loyal OHventures reader, Fran, to have brunch at the trendy Latitude 41 and sightsee downtown! Fran has a passion and love of The Cleve, where she was born and raised, and she knew the perfect place that would be right up my alley! We headed downtown to Public Square where Fran revealed we would be taking a trip hundreds of feet into the air via the Terminal Tower.

Terminal Tower is 52 stories and 771 feet tall, making it the second tallest building in all of Cleveland (and the second tallest in all of Ohio, and the 114th tallest in the United States). For a small $5 fee, you can head up a series of elevators to the Observation Deck (which is entirely enclosed)! Here, you will get the most spectacular view of the CLE possible! On a clear day (not quite like the overcast day in June when I visited) you can see up to 30 miles in every direction. You get spectacular glimpses at everything from the Rock &Roll Hall of Fame to FirstEnergy Stadium (home of the Cleveland Browns) to every other skyscraper in the city (including the tallest in Cleveland and Ohio, Key Tower). You can also see miles into "Ohio's ocean," Lake Erie. 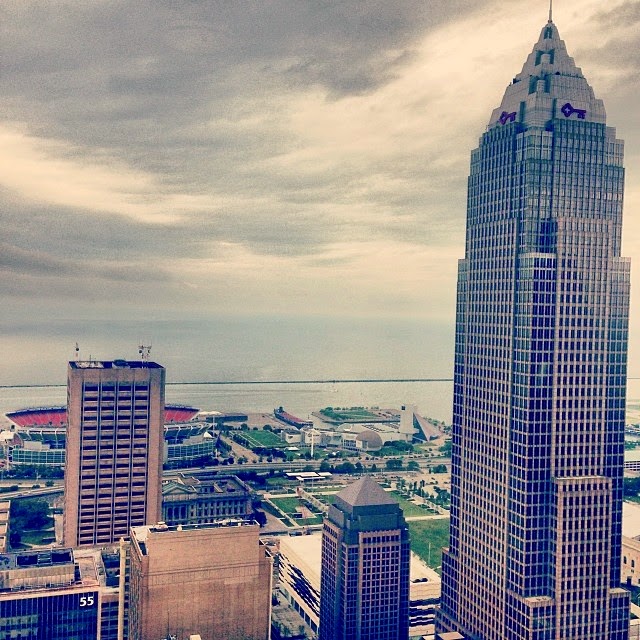 Added to the National Registrar of Historic Places in 1976, Terminal Tower was first dedicated in 1930 and has been a hotspot for tourists and locals alike ever since. The Tower consists mainly of commercial office space, but is also a part of what is known as Tower City Center, which is home to a shopping mall, the Horseshoe Casino, two hotels, the main hub of Cleveland's rapid transit lines. The observation deck itself was closed after the September 11 attacks, but was completely renovated and reopened to the public in 2010.

Another fun feature of Terminal Tower is that every single night, the top section of the tower is lit up in all of its glory. Most nights, the Tower glows in a golden hue, but on special occasions, there are exceptions. For instance, holiday-themed colors (such as green & red for Christmastime), or lights representing certain causes (such as pink for October, Breast Cancer awareness month) will temporarily replace the golden color. 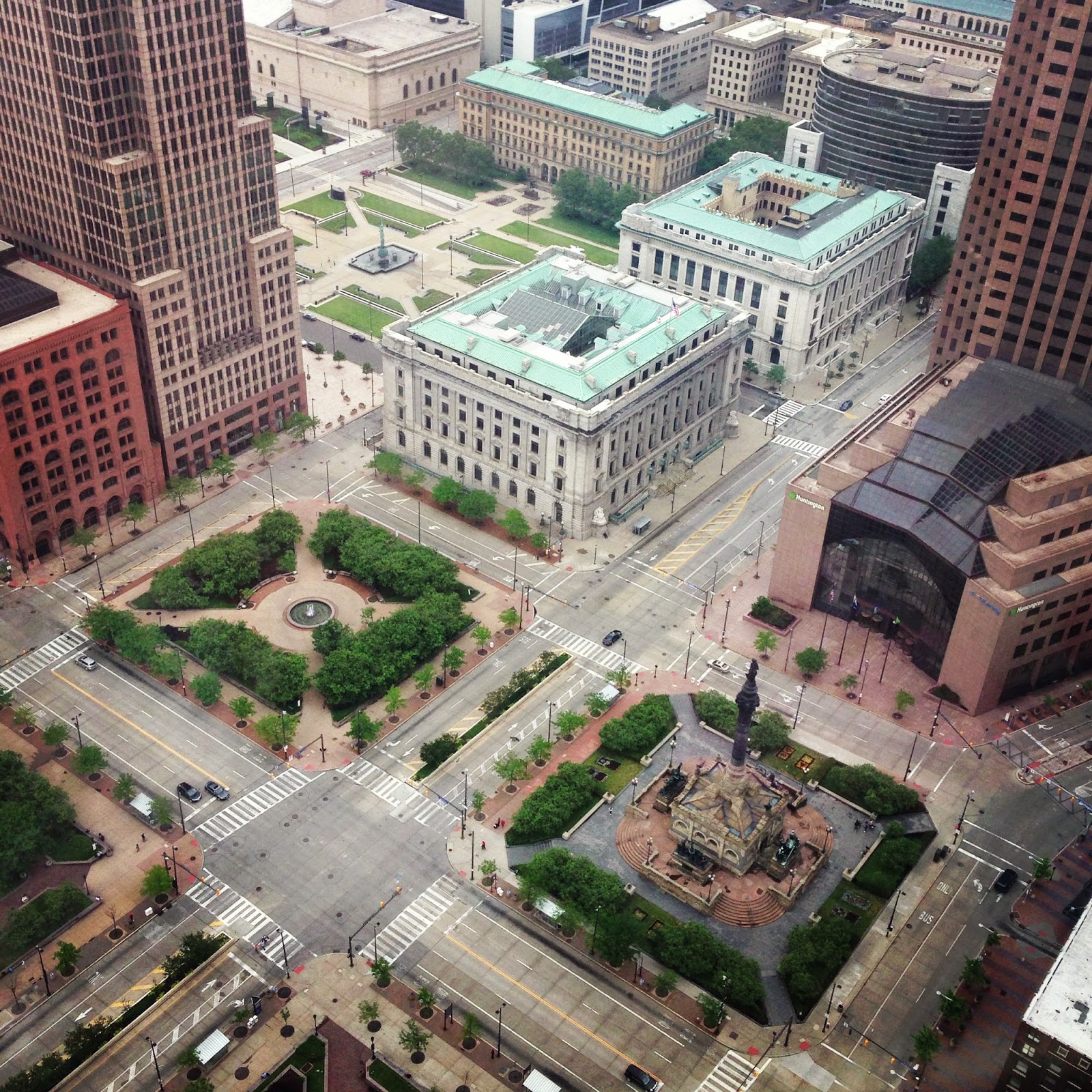 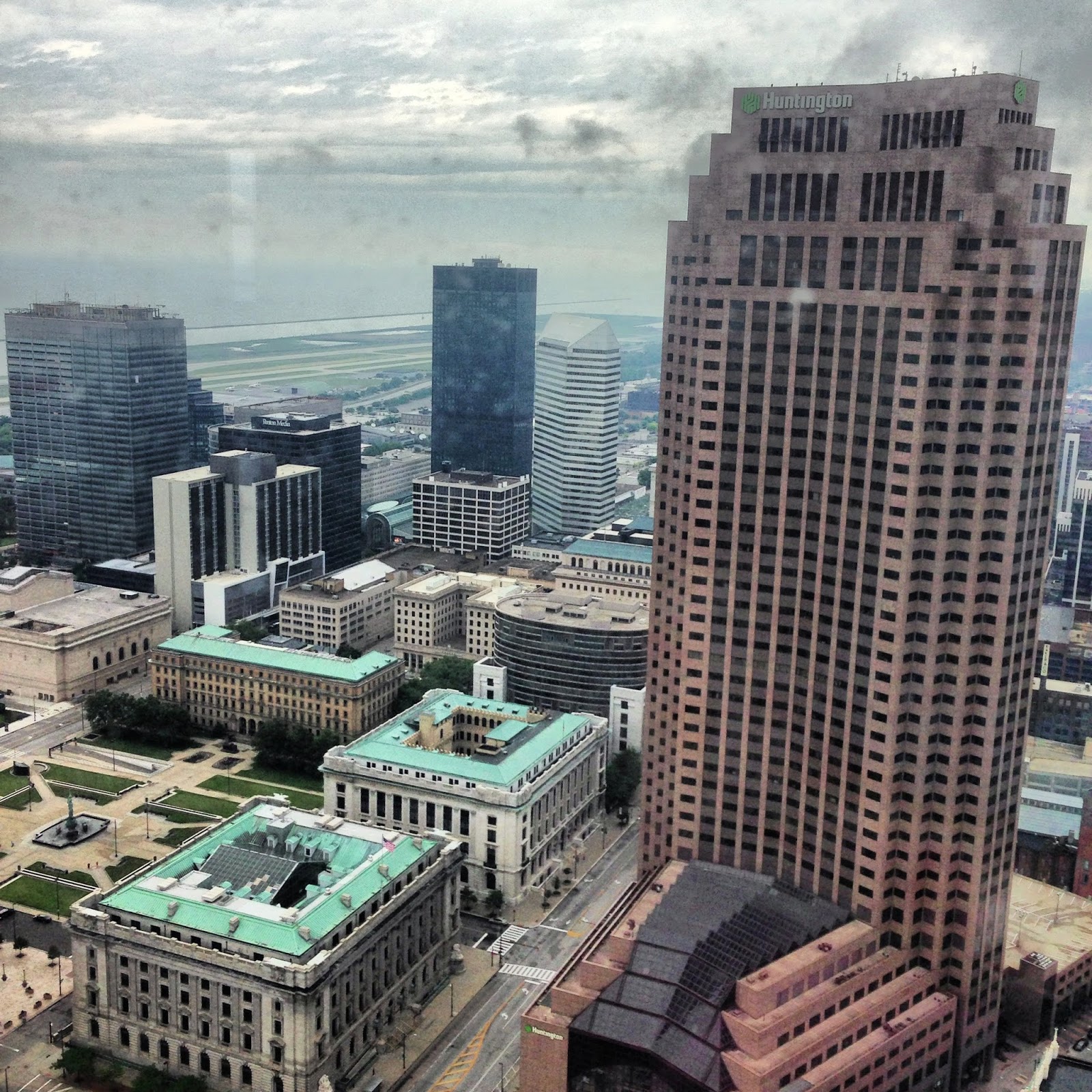 As Fran and I stood in the Observation Deck that Sunday afternoon, she pointed out all of the landmarks in great detail (it always helps to have a knowledgeable local with you). It allowed for me to see the most of Cleveland in the shortest amount of time. If you ever have an hour to spare while driving through, just park at a meter or in the parking deck of Tower City Center and make your way to the top of Terminal Tower.
Posted by Mike at 11:49 PM