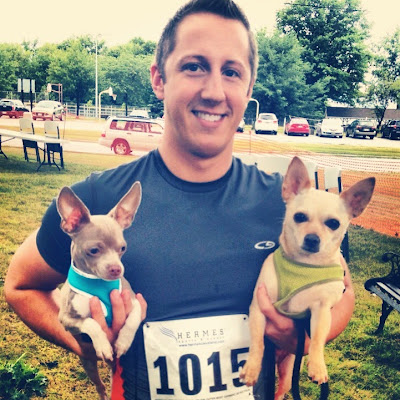 By now, you should know that I am the proud owner of a nine pound pup named Slider, whom I take on various doggy 5Ks, such as the Run With The Pack 5K and the Defend Your Friend 5K in Columbus. We've become nicely acquainted with one another's running style and we seem to work well together now (I am not tripping over his leash or running too fast like I was in the early stages).

On July 21, 2013, I thought it was about time to step it up a notch or two. Slider and I traveled to Lorain County to the town of Avon Lake to take part in the Avon Lake United Church of Christ Dirty Dog Run, Walk, and Wash! There were torrential downpours the night before and the morning of the race. Things were NOT looking good for us! My friends who were planning to run that morning took one look at the dark gray storm clouds and decided to back out. I, however, am pretty crazy! So, I went ahead to the church to prepare for the run. 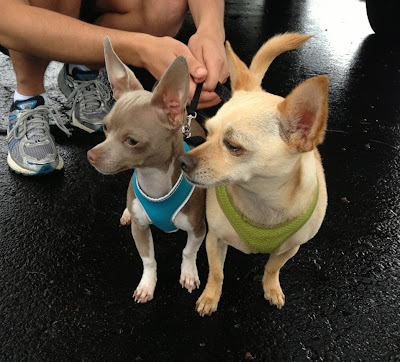 But because of the friends deciding not to participate, I wound up running with ANOTHER dog in addition to Slider! Our running mate was my friend's 5 pound chihuahua, Max, who was only pushing seven months old on his inaugural 5K run! I was very skeptical for how this race was going to go. The pouring rain and the added canine were not going to make it easy. Thankfully, by the time I arrived on site, the rain cleared up! Not a single droplet fell on me or the dogs for the rest of the day! Praise the Lord!

Walking around with Slider and Max surely attracted a great deal of attention. So many people kept stopping me and asking me about the little dynamic duo, and many people vocalized their disbelief that I was going to RUN the 5K with both of these little guys, especially since a 1-mile walk was an available option. Depite all of the doubt cast by onlookers, I went for it! The horn sounded and the three of us were off and running! 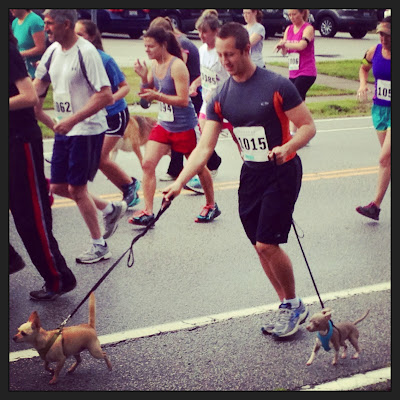 Much to my surprise, running with these two dogs was not as awkward or as difficult as I had thought. I just had to pay extra attention so that they would not cross over in front of me and so that the leashes didn't get all tangeld up! The crisp post-rain air actually made things a bit more bearable, as we did not have to run in 90 degree weather as I have had to in the past.

The course was through a small residential area in Avon Lake, which was a nice added bonus. The pups would occasionally stop to pee and -ahem- other things, which slowed us down a bit. But other than that, they kept up pretty well! Max set the pace, which was very surprising, but makes sense since he is such a young puppy full of endless amounts of energy. He would bark at many of the other dogs though, which was kind of funny. 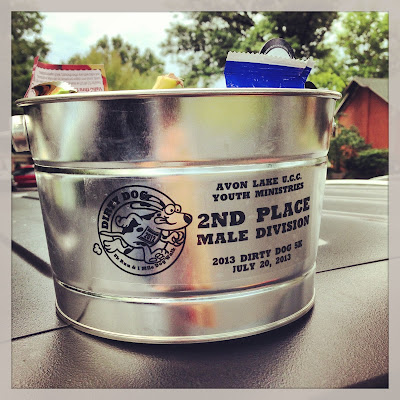 Soon enough, the course wrapped up and we charged through the finish line in full force! We completed the race with a time of 32:40, which was better than any other dog 5K I had ever done before! This was remarkable, given that their were TWO dogs with me! I owe it to Max, who was the fastest of us all! My time helped land me a prize! I was the 2nd Place Finishing Male in my age group, which meant I got a "trophy"! It was so exciting! 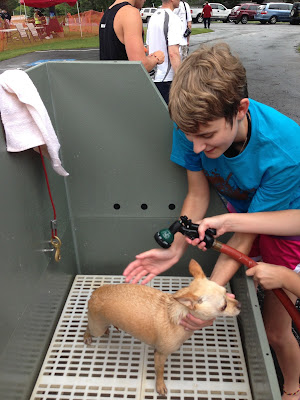 Even though it was not raining, it HAD rained all day and the night before, so the dogs were kicking up a ton of water onto their undersides. Good thing that the "Dirty Dog" also offered FREE dog washes to all those in attendance! We stood in line for a little bit and the pups got all shampoo'ed and scrubbed clean! It was a great amenity and a genius idea (all dog 5Ks should offer this at the end of the race)!

Food, live music, and dog friendly companies were all present after the run. Earth Fare Cleveland was kind enough to give Slider and Max some treats, and snap some great pics of them (below).

This was a fantastic event and a great challenge for me, despite the odds. It was also for a great purpose: the Dog Wash and Dirty Dog 5K are fundraisers for the Youth Ministry programs at Avon Lake U.C.C. Specifically the proceeds from this event are used to help fund the various mission trips that Jr. High youth and High School youth from the church attend each summer. 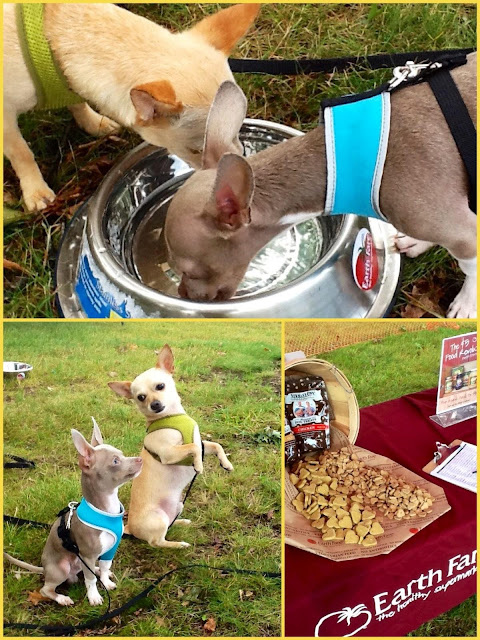