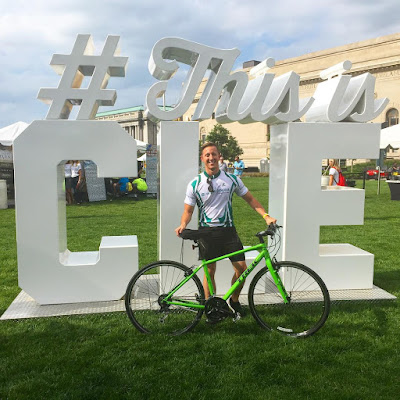 The old phrase "it's like riding a bike" probably wasn't referring to riding a 100-mile bike ride across Northeast Ohio. Unlike that phrase suggests, riding 100 miles is no easy feat - something I learned firsthand while participating on July 18, 2015 in the second annual VeloSano Bike to Cure.

This epic fundraising event was held in Cleveland, with over 2,000 cyclists signed up to raise money in the months leading up to their bike rides. Each cyclist was required to gather a certain amount of donations according to whichever distance they committed to pedal (12, 25, 50, 100, 179, or 207) - all of which would go towards funding cancer research at the Cleveland Clinic.

The health system where I am employed started its own team to rally for the cause. Our team consisted of 27 caregivers, all of whom opted for varying distances. Being the daredevil I am, with my ever-growing bucket list on hand, I signed up to ride 100 miles (joining just 1 other individual on my team who was going this distance). We all had matching jerseys which I thought made us look like superheroes! 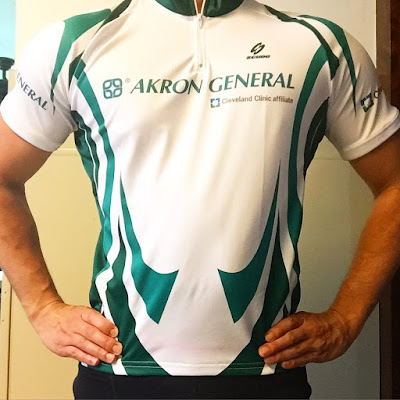 Do I look like the green Power Ranger with my bike jersey?

However, no matter what distance anyone rode, we were all there to push ourselves to the limit and put ourselves under physical pressure - a small feat compared to what anyone who has ever lived with cancer has had to go through during treatment, chemotherapy, surgery and radiation. Knowing individuals in my life who have personally suffered from various forms of cancer - and working at a hospital system - has given me a glimpse of the struggles cancer patients endure. They are incredibly brave and strong to go through what they do, so I was more than happy to tackle the 100 mile course.

This required me to raise $1,500. Thanks to the many others who also have experienced the pains of cancer in their own lives, I was able to reach my goal (and then some). I asked each person who donated to give me a name of an individual they knew who is a survivor or victim of cancer, and I would place their name on my jersey as a reminder as to why I ride. 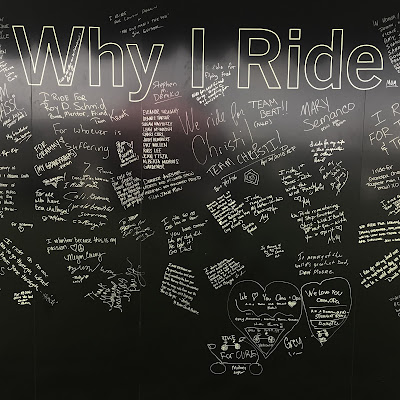 At the kickoff party on Friday, June 17 (ocated at Mall B in downtown Cleveland), there was a "WHY I RIDE" wall in which I also wrote each person's name. It was powerful to see that wall fill up with names and reasons that people have chosen to be there. It was clear that this was not just any ordinary bike ride. 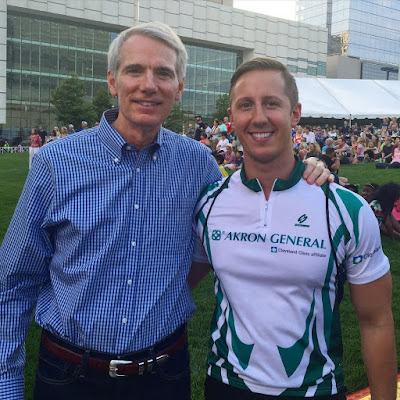 The kickoff party also gave me the opportunity to hear from US Senator Rob Portman from Ohio, who was there to share his family's story of cancer, and also to drive a pace car the next morning. To top things off, he even decided to ride 50 miles himself! It was an honor to see him there. It was also very tear-jerking to watch a very compelling movie on the big screen where survivors of cancer (referred to as LIVING PROOF) spoke about why they were choosing to ride and why VeloSano was such an important event. 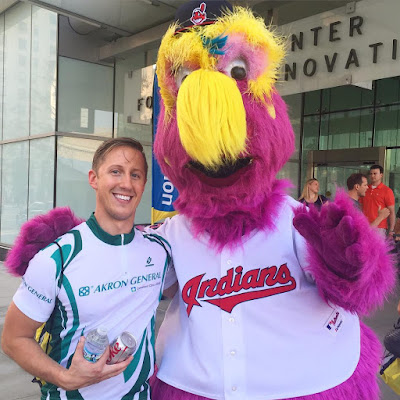 Things were also more lighthearted at the kickoff party. I got the chance to meet the Cleveland Indians mascot, Slider (who would have to be my second favorite Slider after my dog), take a team photo, eat some grub catered by Zach Bruell Events, listen to tons of live music, pet a potbelly pig named Zumi who was a virtual rider, and even appear on the evening news (WKYC) as I was checking my bike in (I didn't know I was being filmed, but many people told me they saw me on air!). 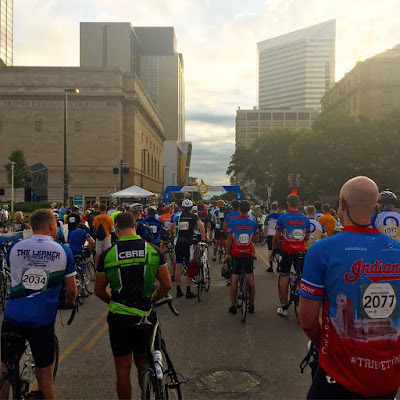 At the start line at 7:30 AM with my fellow Century Riders!

After staying overnight at my friend's house in Willoughby Hills, it was time to start our bike ride nice and early at 7:30 AM. The 100-milers were pedaling the farthest distance you could for the 1-Day routes. They needed to start us early so we wouldn't be riding when the sun went down. I estimated I would finish the ride in about 8 hours, but you'll soon see how wrong I was! 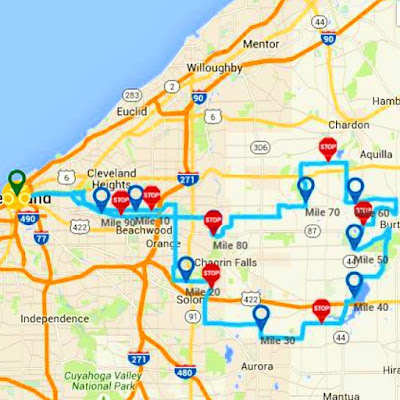 Despite recent rainy weather, it was a beautiful sunny day all day for our ride - perhaps a little TOO sunny. When the horn blew and our race began, the sun was just rising and there was a pleasant breeze from the Lake Erie air. We weaved through downtown Cleveland with police located at each intersection for the first few miles of our ride. This allowed us to surpass any red lights or stop signs so we could make a swift exit from the busy city roadways.

Our route was taking us east near Cleveland Heights and Beachwood, then eastward in a giant circle through or near Orange, Chagrin Falls, Solon, Aurora, back north to Burton and Chardon, then back west through Geauga and Cuyahoga Counties until we reached Shaker Heights and came back to downtown Cleveland.

There were 7 rest stops located along the way, and it was absolutely vital that I stop at each one. These stops took longer than I thought, but were critical so that I could rehydrate after sweating and burning up in the incredibly hot sun (with water and Powerade), eat tons of food to replace the calories I was burning (this included peanut butter and jelly sandwiches, turkey, ham, cheese, protein bars, energy gels, apples, bananas, watermelon, potatoes, cereal bars, and the list goes on), use the restroom, pour water all over my head to cool off, rest on a real chair (or lay sprawled out on the ground), and check my texts and calls from friends and family members who were sending encouragement and love all day long.

I made sure to "live tweet" at each of my stops, and here is a sampling of what I recorded at each stop, along with additional notes about that rest stop:


8:34 AM - Stop #1: 12 miles down. 88 to go. These hills separate the men from the boys. And trust me, I am just one of the boys. (I can not stress enough how brutal these hills were. I even had to walk my bike up a couple of the giant ones. There was a total of 4,000+ feet of elevation on our ride. The downhills, on the other hand, were sweet music to my ears!)

11:14 AM - Stop #3: 36 miles down. 64 to go. Tires were in need of some major air! Hope this will help me fly like the wind. (Honestly the bike mechanic was surprised I made it as far as I did with the low tire pressure I had. Maybe that's why I was going so slow too, and near the end of the pack?).

12:41 PM - Stop #4: 52 miles down. 48 to go. OVER HALF WAY DONE! Bum and legs are hurting. I must be some kind of masochist or something. (I also believe I was getting really dehydrated at this point, because I was feeling dizzy and drained of energy. This is the point where fellow cyclists started to drop off like flies and get driven back to the start line. I was bound and determined to finish and not give up).

2:13 PM - Stop #5: 65 miles down. 35 to go. Please send some encouragement. This is getting really rough. Ahhhh!! (Yes, this was taking me FOREVER, and I was hitting a wall, going very slow, and lacking motivation. At this stop, I made a couple phone calls to get some pep talks, and I had a lot of watermelon and energy gels which truly refueled me!)

3:47 PM - Stop #6: 83 miles down. 17 to go. Guys, thanks for all of the support. Euphoria is guiding me to the finish line. And these potatoes I'm eatin'! (I was making friends with the nearby cyclists. We were officially at the end of the pack - the slowest of the 100 milers. But that was OK, because unlike others, we were going to finish. This was the home stretch!

Stop #7: 90 miles dpwn. 10 to go. (I actually forgot to tweet at this stop, probably because I could taste that finish line head! 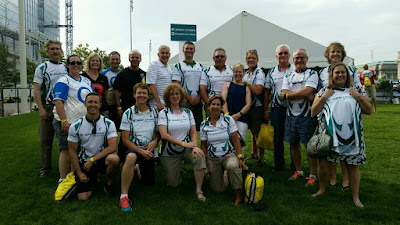 Team Photo at the Kickoff Party for VeloSano

Finishing was a rush of feelings. Mainly, it was relief to be finally done after nearly 10 hours of pedaling. There was also a sense of pride for completing such an enormous endurance event. A bit of sadness occurred, since there were not too many people left at the finish line party (that's what I get for being so slow). But mainly, I felt appreciation. I appreciate and feel so fortunate to be able to have taken part in VeloSano. I was thankful to have finished the entire 100 miles safely and honored to bike for a worthy cause. I know that I would definitely ride VeloSano again, and I would recommend it to anyone interested. But I don't think I would do 100 miles again. It was difficult, but as they say, no goal was met without a little sweat.
Posted by Mike at 9:00 AM