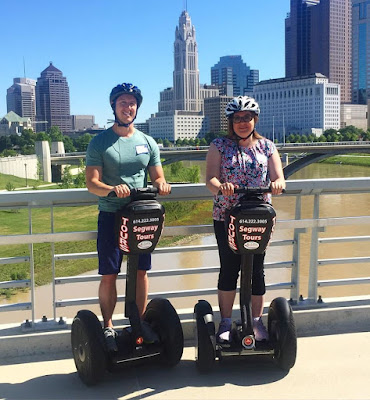 Having lived in Columbus for 10 years, I never thought that in just two hours on a Segway, I could learn so much more about the city, and see so many nooks and crannies that I had not yet seen. These two wheeled contraptions are extremely popular forms of recreational transportation, and many large cities offer tours via Segway.

SegAway Tours of Columbus offers a series of tours for anyone interested in uncovering hidden secrets about the city while leisurely gliding through the parkways, riversides, and sidewalks of downtown, Arena District, Short North, and Victorian Village.

There are several tours to choose from 7 days a week, on both mornings and afternoons. Evening tours are offered in summer months, when daylight allows. Each tour costs $59 per rider, and it is most definitely worth it, whether you are visiting from out of town, or if you've lived here all your life.


No experience is necessary to sign up for a tour. This was very important, since neither myself nor my friend Anna (from Colorado) had ever stepped foot on a Segway prior to our  tour this June. 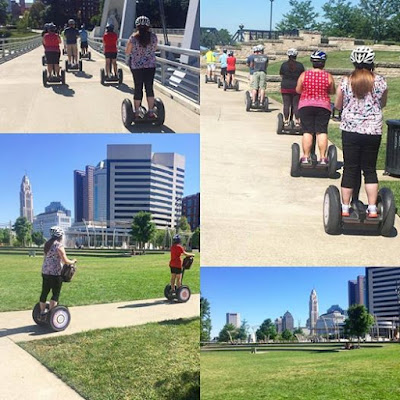 The instructors from SegAway Tours of Columbus provide 15-20 minute introductory lessons for the group. They were very helpful in getting our group of 8 riders comfortable and familiar with the Segway. The Segway is a self-balancing battery-powered electric vehicle, with computers, sensors, and electric motors in the base. This means there are no buttons, nobs, levers, or controls on the handles or "dashboard." Instead, riders command the Segway to go forward and backward by shifting their weight forward or backward on the platform. These means pushing down on your toes to move forward, and pushing back on your heels to go backward.

The motions are very minor and sensitive, so it does take time to get used to it. Turning and steering is done with the handlebar, which shifts back and forth only to the left and right (it does not pivot like the handlebar of a bike). You go faster by pushing harder, and go slower by pushing lighter with your feet. The max speed is 12.5 mph, but the average speed we would be going on our tour was 8 mph.

After getting acclimated to the Segway, we were off and running. Our tour guide, Jim, had a headset on, and we all had earpieces so we could hear him as he described points of interest and landmarks along the way. He also would advise us of any pedestrians, obstacles, stop lights, and other instructions to be aware of while we rode. 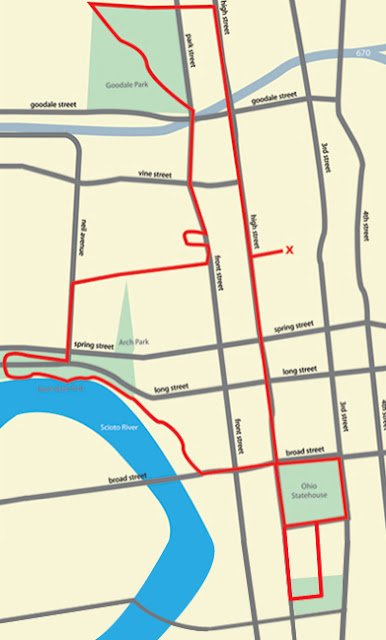 Map from SegAway Tours of Columbus

We started at the Greater Columbus Convention Center (where the tour headquarters is located) and then made our way down to Nationwide Plaza. The route then led us down to the Ohio Statehouse, Columbus Dispatch building, Bricker & Eckler, the Ohio Theatre, the Columbus Commons, the Scioto Mile, COSI, North Bank Park, Huntington Park, Nationwide Arena, and then back to our starting point (we did not go to Goodale Park, as shown, due to ComFest taking place)!

Our tour guide was very knowledgeable, and added a good sense of humor and fun to the tour. He learned all of our names and interacted with us frequently. He would give us tips on how to improve our Segway techniques along the way. It was very helpful, because as time went on, I started to become more comfortable and natural on the Segway. He also stopped on a bridge and took photos of all of us.

The best part of the trip was all of the tidbits I learned, and all of the things that have changed in the city since I moved away 3 years ago. One of my favorite things to see was Coleman's Pointe, a scenic overlook named after Columbus' longest serving mayor, Michael Coleman. A quote by Mayor Coleman is shown on the promenade, which sums it up very nicely: "A city that stays the same falls behind."

Columbus is continuously changing, and seeing it from the vantage point of a Segway was incredibly exciting. Book your tour now because they fill up fast!
Posted by Mike at 11:44 PM