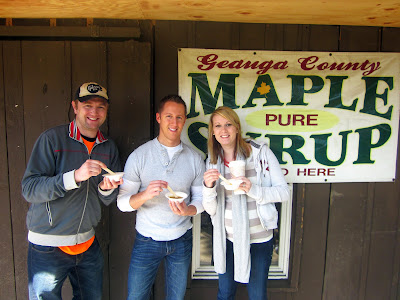 When thinking of maple syrup and maple leaves, places like Vermont and Canada immediately come to mind. After all, Vermont is the leading maple syrup producer of all the 50 states, and the maple leaf is the national symbol for the Canucks. But Ohio is not far behind! According to the United States USDA Maple Syrup Production Report from 2010, Ohio produced 65,000 gallons of the gooey goodness, ranking 4th or 5th each year of all maple producing states. While maple is produced everywhere in Ohio from Ashtabula to Zanesville, a great deal of this maple made in Ohio comes from Geauga County, and, more specifically, Chardon.

This is why Chardon is the home to one of the largest and most-attended maple syrup festivals in the state. This year, the celebrations took place from April 26 to April 29 with each day chock full of sweet (no pun intended) activities for everyone young and old alike!

My friends Emily and Ben have family who are heavily involved in the Geauga County Maple Festival each year, so I was able to get a fantastic tour of all that the festival had to offer. Emily's stepfather even gave me an education on how maple syrup has been produced throughout history. He had an exhibit set up showcasing every technique used since the origins of maple syrup, which dates back to the Native American time period. Below, you can see part of the educational aspect of the festival. 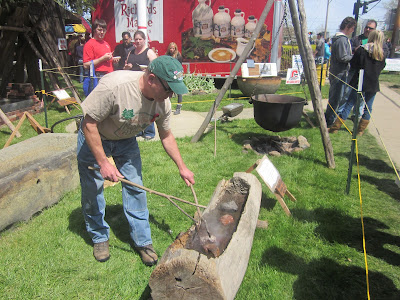 Following the history lesson, it was then time to visit all of the shops and stands that lined the streets, where I came to find that maple is much more than just a topping for waffles and pancakes. Richard's Maple Products, for instance, offered a seemingly endless array of maple based products, such as: brittle, jam, jelly, mustard, barbecue sauce, meat seasoning, butter, and countless candy varieties. I purchased maple cream candy, balsamic maple vinegarette dressing, and maple flavored dog treats! It was remarkable to discover how versatile the sticky stuff can really be!

After a bit of shopping, it was time to taste the sugary sap for myself! My friends insisted I try the "maple stirs" which are apparently synonymous with the festival! They ordered me a "double stir" and handed me what looked like just a styrofoam bowl full of Aunt Jemima. However, this was anything but the typical mass-produced syrup found in the supermarket. This was authentic and organic maple syrup from right here in Chardon. But instead of eating it as it was, I was ordered to vigorously stir the hot goo until it transformed into a tan-colored creamy substance resembling peanut butter. It was an awesome and tasty treat, almost too sugary for me to stomach (apparently those in the Northern region of our state have built up a higher sugar tolerance). Regardless of a but of an upset tummy, it was a delight!

We washed down the maple stir with a few locally brewed craft beers from Chardon Brew Works on Main Street. The best beer I had was made with - you guessed it - maple! It was called the Pride of Geauga Maple Porter and was dark and smooth. The townfolk of Chardon certainly take this maple thing seriously! 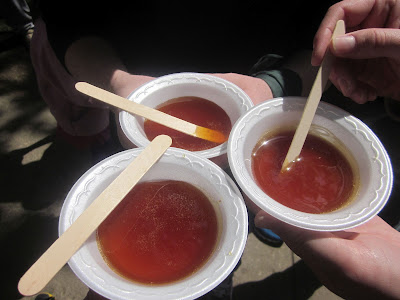 Throughout the weekend, there are exciting contests to watch or participate in, including the lumberjack competition, tug-of-war, golf putting contest, and the granddaddy of all events, the infamous bathtub races! That's right. For reasons unbeknownst to me, Chardonites love to decorate old cast iron bathtubs, fashion some wheels onto them, and ride them up and down the road during the Maple Festival. How it relates to maple is beyond me, but it certainly is entertaining to watch, as evidenced by the enormous crowds gathered along the roads to cheer on their favorite team of tub trotters!

Walking around on the beautiful spring afternoon, I got to see the State Senator, the "Tooth Fairy," and most importantly a great deal of hometown pride from a city that suffered an enormous tragedy just a couple of months prior. There were touching dedications in the center of town for the students who were killed in the school shooting that had taken place at the high school in February. I was told that the festival was bigger than ever this year. It shows that how the city has come together and risen above the unfortunate events they had been handed.

It was a cool experience to see such passion, tradition, and positivity exuding in Small Town, USA. The Geauga County Maple Festival is certainly a unique culutral experience that any OHventurer should attend! 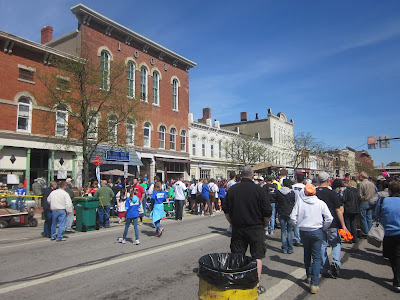