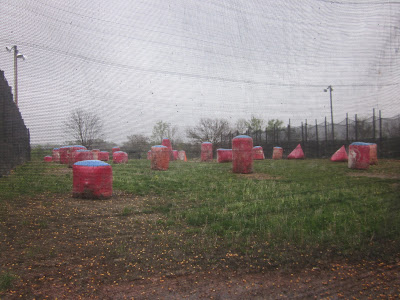 Not many other activities can get as extreme as paintball! Paintball brings the childhood favorites of Super Soakers, Nerf Guns, and Laser Tag to a whole new level by incorporating a certain level of danger on a sophisticated grown-up playing field. Players gather on either an indoor, or - in most cases - an outdoor course to play on teams or individually. While many variations of gameplay exist, the general object is to avoid getting "shot" by paintballs, and to eliminate other players by hitting them with paintballs. It is evident when an opponent is out, as the bright neon colored liquid is splattered upon them.

Sounds pretty intense! However, aside from minor welts, it is rare that any major injury occurs when paintball is played properly and with the appropriate safety gear.

The "paint" in paintball is in reality a water soluble dye with a clear gelatin shell. The substance washes out very easily from clothes and skin, and the capsules are designed in a way that they are supposed to explode (or break) without trouble when they hit. In some cases, the shells do not explode, which ends up hurting quite a bit. It is usually nothing more than a stinging sensation.

All paintball locations require that you wear a mask at ALL times, unless in a designated safe zone (which is usually a tiny tent). Beyond that, it is up to the player to decide what else to wear. In my experience playing paintball, I have found that a good pair of gloves and multiple layers of clothing are essential. It's also smart to wear a hat or hooded sweatshirt, as the masks do not always cover your entire head (such as your hair). A turtleneck or other padding around the neck is also recommended. Depending on the weather, you will want to stay as dry as possible, so a good pair of hiking boots or steel-toe boots are the best bet if it is muddy or rainy.

I have only played this extreme sport on a few occasions, and I have had a surprisingly amazing time. Once was with a group of fraternity brothers as we welcomed our friend and brother, Richard, back from active duty in Afghanistan. Needless to say, we had a badass time with a marine on our team. The other time I went was for a bachelor party consisting of both the groom AND bride! This paintball outing took place at Splatter Park located in Mount Gilead in Morrow County.

Splatter Park was buzzing with business, even on a very rainy Saturday morning when we arrived. The friend in charge of the event called ahead and booked us as a "private group" so that we would only be playing with each other rather than with strangers. The cost was approximately $37 for the amount of ammunition we decided to get. At any time, we would be able to purchase more ammo if need be.

A very professional and helpful staff assisted our group in explaining the rules and getting our rental gear checked for speed and functionality. Soon, we were all ready to tromp through the mud to annihilate our opponents (each other) with fluorescent green paint! Led by a "referee" of sorts, we played in a series of courses - all outdoor - on various terrain with various obstacles. Some courses had steep hills, others had a great deal of vegetation and trees to hide behind, and others were nothing but open fields with bunkers and mounds of dirt. The courses were almost always peppered with wooden barriers, forts, steel barrels, and even abandoned aircrafts that we could hide behind when strategically attacking our opponents.

It was great that Splatter Park was able to offer so much variety. The referee made sure we played a number of different types of games, such as capture the flag, King of the Hill, and good old fashioned "last man standing" format. I made some bold moves that sometimes cost me (like getting pelted in the back), and sometimes worked out for the better (like acquiring the flag and taking it to our base to win the game for my team). Agility, stamina, strategy, and sharpshooter skills are all key components to paintball.

As part of our package, we also received a meal of a hot dog, chips and drink during lunch. This may not be enough food for most people, so be sure to eat ahead of time, or pack a cooler of (non alcoholic) drinks and food to have at your base camp.

In all, the only downfall of my paintball experience was that the masks constantly fogged up due to the humidity and the rain. This limited our vision and made it very difficult to accurately identify targets and play the game to the best of our abilities. Aside from that, we all had an absolute blast at Splatter Park, which offers the "Best Paintball in Ohio." 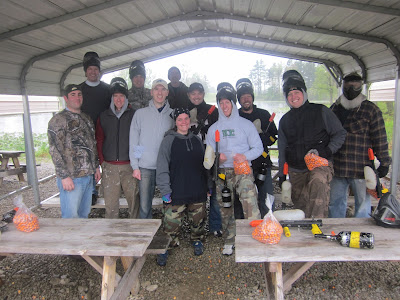 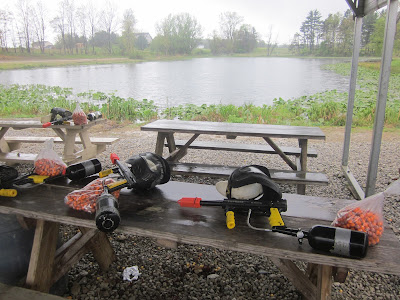